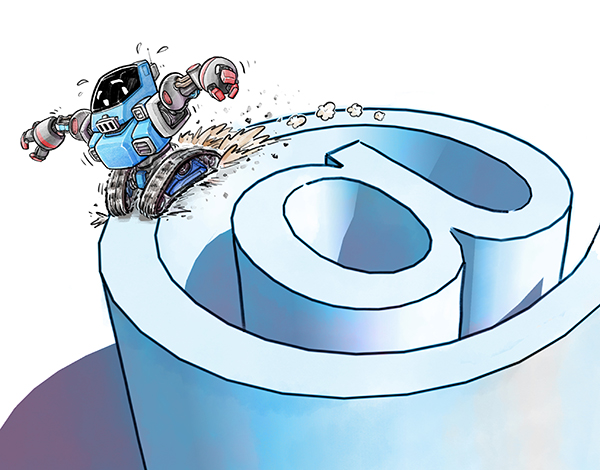 The growing dominance of leading technology companies has occasioned an intense debate on the tradeoffs between efficiency and market power, while raising questions about what the changing structure of markets will mean for innovation and the distribution of wealth in the future.

The annual Jackson Hole Economic Policy Symposium in Wyoming, United States, organized by the Federal Reserve Bank of Kansas City, offered an excellent set of papers and commentators on the subject.

With respect to efficiency and competition, there is already cause for concern. John Haltiwanger of the University of Maryland has shown that the entry rate of new enterprises into the market has fallen sharply, particularly over the past 12 years. And Jay Ritter of the University of Florida has demonstrated a similarly steep decline in annual initial public offerings.

Lack of dynamism in many sectors

These findings suggest that young enterprises are increasingly agreeing to be acquired, rather than trying to grow into large public companies. At the same time, exit rates within many industries have remained relatively flat despite an increase in productivity dispersion. In other words, weaker producers aren't being knocked out of the market, implying a lack of dynamism in many sectors.

On the other hand, measures of market concentration, such as the share of sales by the four largest enterprises, are up in a variety of industries in the US, though it is not yet clear what conclusions one should draw from this.

There is some debate over whether concentration is also rising in Europe, where somewhat tighter antitrust policies are in place. If it is not, then antitrust policies could explain the difference between Europe and the US in this regard.

Before we get to that question, let us look at what we know. Current research suggests that rising concentration is a reflection not of market power, but of a shift in market share toward better-managed, more innovative companies－the companies that attract the best employees. Having congregated in a few superstar companies, the capable have become super-capable.

This would seem to be a good thing, if it suggests that companies are gaining market share by becoming more efficient, and not simply by snatching up other companies while antitrust authorities stand aside. One would expect market concentration/monopolization to lead to higher prices, but there isn't much evidence of that happening.

Of course, enterprises could be improving efficiency without passing on the savings, in which case even flat prices would be a source for concern.

Another development is the growing importance of "intangibles" such as software and intellectual property, which Nicolas Crouzet and Janice C. Eberly of Northwestern University in Illinois suggest could be driving an increase in market concentration. Moreover, distinguishing among industries, they show that higher concentration is correlated with rising productivity in some sectors, and with growing market power in others.

In consumer-facing industries where Crouzet and Eberly have found productivity gains, Alberto F. Cavallo of the Harvard Business School suggests that consumers have benefited in the form of lower prices. The broader point is that we cannot say definitively that rising concentration has been harmful to consumers.

Still, the healthcare sector offers a cautionary tale. It, too, is heavily concentrated, but dominant enterprises seem to be intent on squeezing consumers, and they don't all show high levels of productivity.

The question, then, is whether today's highly productive superstars in other sectors will eventually go down the same path. After all, while well-known market leaders such as Facebook and Google have been offering many products and services for free (which obviously benefits consumers), their business models have raised a number of pressing questions.

For example, one must consider whether the exchange of personal data for the use of such services constitutes a fair trade. There is also the matter of whom these companies do charge for services, and whether those costs (say, for the advertisements you are forced to watch) are being passed back to consumers.

It remains to be seen if the current arrangement－whereby users get free services in exchange for viewing advertisements and relinquishing data, companies pay platforms to access these customers, and the platforms get a huge network of customers in exchange for their innovative services－will last. More important, there is the as-yet-unanswered question of whether it will preserve dynamism in these markets over the long term.

A source of threat to future dynamism

The next important question is whether the structure of key industries is slowing down investment, research and development, or the diffusion of innovation from superstar companies. Most economists would say that innovation is driven largely by competition, both within an industry and further afield, as well as by the threat of future competition.

So, even if one is not too worried about the effects of concentration on innovation today, one still must consider whether that could pose a threat to future dynamism.

Here, I think there is reason to worry, given the falling rate of new market entries and the growing tendency among younger companies to be bought out. More often than not, such acquisitions are primarily used by dominant companies to shut down or assimilate new products that might pose a competitive challenge in the future. There is plenty of evidence of this happening in the pharmaceutical industry; but we also know the FAANGs (Facebook, Amazon, Apple, Netflix, and Google) will resort to such measures as needed.

In addition to stifling competition, this practice is also discouraging financing by venture capitalists, who now talk of a "kill zone" surrounding the major technology companies' main products. At this point, venture capitalists are hesitant to finance anything that falls in the kill zone, because there is no prospect for growth there－only one-and-done acquisitions.

In light of these incumbency advantages, we may no longer see as much competition as we did in the recent past, when enterprises were still vying for market share in key sectors.

Perhaps the biggest worry of all is the deceleration of technological diffusion. Current data suggest that new ideas are not spreading from superstar companies to the rest of the economy. While some enterprises show strong productivity growth, and the dispersion of productivity within industries is increasing, we are also seeing lower productivity growth overall.

There are a number of possible reasons for low diffusion, from intellectual property (IP) protections to constraints on labor mobility between enterprises. But whatever the cause, it is clear that we should be worrying even more about the future of productivity.

A final concern is inequality. At the risk of oversimplifying, we have reached a point where the highest earners are concentrated in a few companies, with the rest largely lacking such earning opportunities. In other words, it is not only the few at the top in every company who are earning outsize wages, but also the many in a few superstar companies. Should that make us feel better?

Obviously, neither scenario is appealing. The more the top-skilled people congregate in a select few superstar companies, the more those left behind will wonder why the "elites" keep getting away with everything. It hardly seems fair that those reaping the lion's share of the rewards also happen to be so concentrated in a few companies on the coasts, rather than distributed more broadly across companies, sectors, and regions.

As for those left behind, Alan B. Krueger of Princeton University has warned that a variant of Adam Smith's problem, namely collusion among a few companies in the labor market, has become increasingly salient. In certain markets, at least, we may be witnessing the rise of monopsonies (a single buyer), rather than monopolies (a single seller). In the case of the labor market, a company that enjoys a monopsony position－or that has implicitly colluded with other companies－can put downward pressure on wages across the board.

The vital question: What is to be done?

Having surveyed the data on market concentration, innovation, and the distribution of incomes, we should now turn to the policy implications of these trends. To my mind, policymakers should be particularly worried about how the behavior of superstar enterprises today could affect competition in their industries tomorrow. Politicians and regulators should take a hard look at whether IP and proprietary agglomerations of data are being used to stifle competition or prevent the diffusion of new knowledge and technologies across sectors. And they should consider policy instruments that go beyond the scope of traditional antitrust.

For example, some have said individuals should have a right to their data. This could potentially improve diffusion, because companies would become purchasers of data, rather than sellers. And, no longer tied to any one platform, individuals could distribute their data to competing companies.

In terms of labor, policymakers could intervene in a number of ways. For example, there might be a case for antitrust action against "non-compete" contracts, which essentially impose restraints on trade (of labor, in this case).

Why should those who already hold a given license be the ones to set licensing rules? One would think that a more neutral body should determine the extent of occupational licensing.

At any rate, one of the most important effects of the economy's ongoing structural changes has been on the political economy of central banking. Fear of technological change, the declining quality of jobs, and the disruptions caused by superstar companies has given people plenty of reasons to be unhappy. Despite low unemployment, many workers are unhappy. They are stuck in non-superstar companies, where they harbor a general post-global financial crisis resentment against elites and their policy agenda.

And, of all elites, central bankers seem to have the most strikes against them. Most have doctorates and speak in a language that nobody else understands. They discuss global financial conditions and the systemic effects of monetary policies. What they do not talk about, many believe, is Main Street, except when it factors into discussions about inflation.

No wonder there has been such a decline in public trust. It is bad enough when average citizens can scarcely understand the complicated tradeoff between inflation and unemployment. It is worse when one adds in public grievances over Wall Street bailouts and the perception that central bankers are focused on global conditions instead of domestic concerns. Yes, it is every central banker's job to think about such things; but that job is increasingly being met with suspicion by those who aren't in the room.

Central bankers' job becomes even harder when politicians try to score political points by attacking you. One should not envy central bankers as they navigate today's environment of distrust and derision, which itself is a product of the larger structural changes occurring in the economy.

Can central bankers win back the public's confidence, maintain global economic stability, and find ways to accommodate widespread technological disruptions all at the same time? That will be a key question in 2019－and beyond.