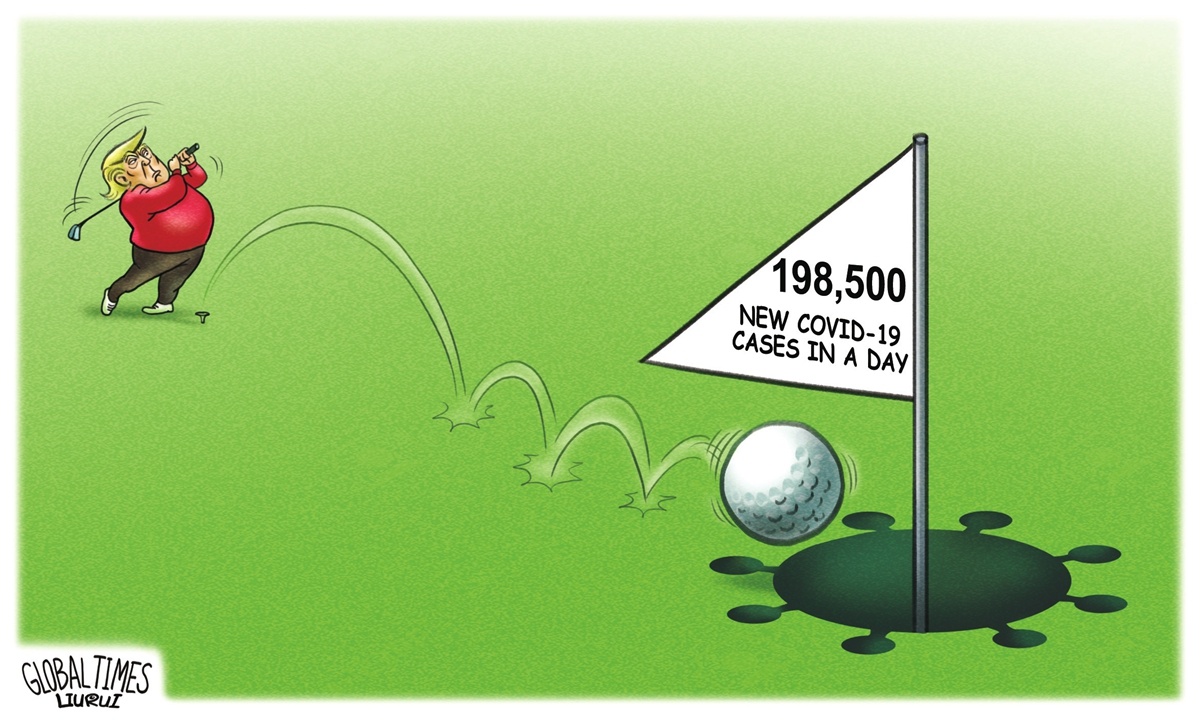 Saudi Arabian King Salman bin Abdulaziz Al Saud on Saturday presided over the virtual G20 summit hosted by the Arab country in Riyadh, with the forum dominated by efforts to tackle the COVID-19 pandemic. In his speech, Chinese President Xi Jinping impressed the world, saying that China will honor its "commitment of giving assistance and support to other developing countries, and work to make vaccines a global public good accessible and affordable to people around the world." Russian President Vladimir Putin also said that Russia is prepared to provide its own coronavirus vaccine to countries in need.

US President Donald Trump has been criticized for his absent-mindedness during the summit. Video showed that Trump kept his head down when Saudi King Salman gave his opening remarks. During the summit, Trump sent many tweets that had nothing to do with the G20 or COVID-19, as he continued to complain about election frauds in Michigan, of which no evidence has yet been provided, etc. On top of this, the US president skipped the summit's "Pandemic Preparedness" event in favor of a trip to one of his golf clubs. Trump was clearly not interested in the G20 summit and its discussions as his mind was still fully preoccupied by the 2020 elections. His presence at the virtual APEC leaders' meeting, hosted remotely by Malaysia on Friday, and the virtual G20 summit is believed to be only a move to show he is still US president.

Trump's performance at the two big meetings is precisely a reflection of the US fight against the COVID-19. The US has astonishingly registered over 12 million coronavirus infections with nearly 256,000 deaths. The US should be displaying the most concern and seek cooperation for the COVID-19 fight. However, Washington, in its indifference, has poured cold water onto the notion of global cooperation in dealing with the pandemic.

To a great extent, the US presidential election reflects American voters' dissatisfaction against the government's COVID-19 fight. Quite evidently, the current US administration is willfully ignoring that strong signal. It is frustrating that the US government cannot translate American people's wishes into purposeful actions.

The US has made certain breakthroughs in vaccine development, but so have China, Russia and other countries. The US' attitude toward vaccines seems much too optimistic. As WHO Director-General Tedros Adhanom Ghebreyesus said on November 16, "A vaccine will complement the other tools we have, not replace them… a vaccine on its own will not end the pandemic."

Instead of becoming a leader in COVID-19 fight with its huge technological and financial strength, the US has become the worst-hit by COVID-19 and dragged the whole world behind. The Trump administration has allowed the internal politics to disturb the global COVID-19 response and openly stands on the opposite side of the WHO. This is unforgivable. History will remember what the current US administration has done. Washington's tricks in shirking its responsibilities are borne out of short-term political expediency. History will judge them accordingly.

The Trump administration has turned the wheel back on globalization. It has withdrawn from a string of international organizations. Various parties strongly hope the Biden administration will make the necessary amendments. Many organizations under the UN and other multilateral mechanisms have become accustomed to the absence of the US. Without the US, the world will still move on and the lives of the people will continue. It is hoped Washington will stop marginalizing the US at a time when humanity is confronting major challenges. We hope the US leadership will never post tweets or play golf again while the rest of the world is working hard to address common crises.

It is reported that the incoming Biden administration stands ready to reinforce foreign cooperation. But many reports said the future government will do so to cope with the "China challenge." This is a wrong perception. The biggest challenge for the US and its allies today is not China, but the novel coronavirus, nor will the biggest problems in the future come from China. From promoting global economic recovery to responding to public crises, China is a partner of the US and the West, rather than an opponent as some people imagine.

If the next administration continues to view China as a top issue that the US needs to address, it will be impossible to lead the US toward a new path of seeking truth from facts. It will wander in the shadow of Trumpism. All humanity needs to join hands and make arduous efforts to completely defeat COVID-19. There is no higher morality than saving lives around the world. The fate of the global economy next year will rest on how much substantive progress is made in defeating the pandemic. There is no time to play political games in the fight against the pandemic.