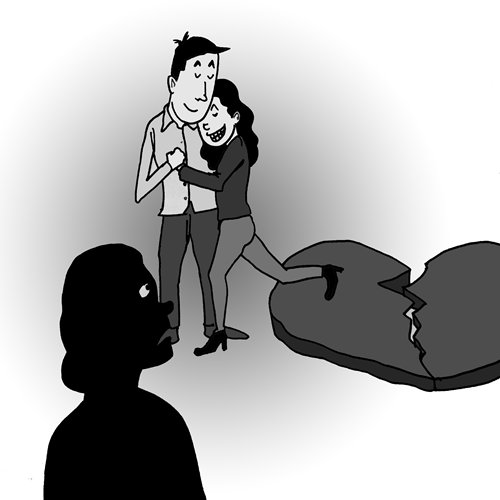 The other night when I was excitedly reading the fairytale story about Prince Harry and Meghan Markle, my mother called and told me that my cousin is going to get married during the upcoming Chinese New Year.My 33-year-old cousin is an "inspirational hero" in my family. She got married at 23, gave birth to a girl and divorced at 25; she got married again at 27, gave birth to a boy and then divorced at 30, and she is now looking forward to getting hitched to her third husband. My mother often uses her as an example to shame me, a 35-year-old "leftover woman" who has never been married. My mother doesn't really care that my cousin is divorced. The fact that my cousin can get married again and again while I am still unmarried makes me a loser. I said to my mother that maybe I have been living outside of the country for too long, but how can a divorced woman with children be more desirable than me? "People's beliefs about the concept of divorce are changing," she said. "And she is not as picky as you." Ow! That hurts!Over the years, I noticed that there has been a remarkable transformation in Chinese society about marriage. In the old days, marriage was mostly permanent. Women stay in their dead marriages for the sake of their children and financial support from their husband. But nowadays, as more and more women are becoming better educated and getting paid more, they put more value on the quality of marriage, which is causing a rise in divorce rates. The number of those divorced in 2016 rose 8.3 percent from 2015 to 4.2 million, according to the Ministry of Civil Affairs. As the divorce rate is soaring, "Have you divorced yet?" has become a common joke between me and my married friends. Remarriage is a major concern for many divorced women. It has been reported that divorced women were more likely to remarry foreigners as Chinese men prefer a wife who is a virgin. So, when I first heard about my cousin's divorce, I worried it might be tough for her to face society with this social stigma attached to her. It turned out that my worrying was unnecessary. She is even more popular than I am.How come my two-time divorced cousin can get remarried before I even have my first marriage? I turned to my best friends for answers. They explained that Hong Kong singer Faye Wong is a role model for many divorced Chinese women. At 47, the twice-divorced singer is reportedly going to marry her boyfriend, Hong Kong actor Nicholas Tse, who is 11 years younger than her. "She is strong, independent and brave to fight for true love," they said. Now they look up to Meghan Markle, a 36-year-old divorced Hollywood star who is about to become a member of the British royal family."A divorced woman is considered a real woman," my friend Cecily said. She told me that a divorced woman has more value because men believe they have a better understanding of what marriage is like and thus would be easier to get along with. She added that there have been a lot of articles to teach men how to date divorced women.I guess to become a "real" woman I need to start finding my future ex-husband.