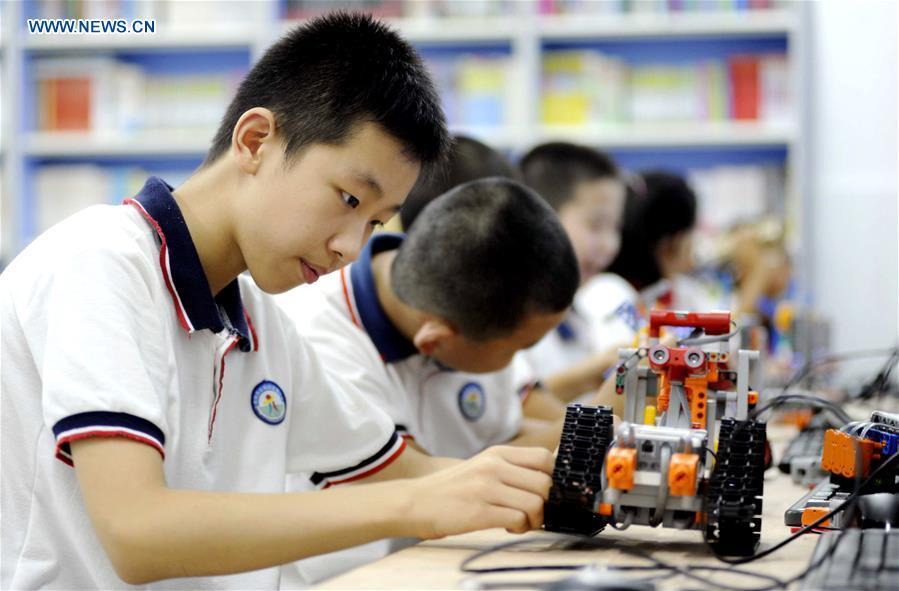 At the end of the normal school day, many Chinese students flock to various tutoring classes and continue their "schooling" well into the evening.

Reports always suggest that, despite economic slowdown, China's private education industry could be the last to shrink. And recently some startups emerged to leverage artificial intelligence to innovate and improve learning experiences, which not only interested parents and children, but also attracted dozens of investors.

The expanding size of the tutoring market is arguably the best evidence to show how stiff is the competition among students; it also attests the significant role that the private educational sector plays in national economic development.

Critics, however, see it as putting more pressure on children and impairing their well-being. They argue that traditional schooling already provides adequate and quality instruction for students.

Indeed, these tutoring schools burden almost every family in China, both mentally and financially; however, the private educational sector does act as a "testing ground" to help refine and even reform the current educational system in all aspects.

What is more, student coding education, a present-day wave led by the private tutoring industry is definitely going to remodel future curriculum design in Chinese schools.

Two decades ago, to keep pace with economic growth, the Ministry of Education proposed to highlight IT-related education in all elementary and secondary schools, which later evolved into a compulsory section of national curriculum, yet engaged with basic concepts and skills.

Today, programming literacy is becoming one of the most essential skills for the next generation, but it has been limited to the computer science majors in Chinese universities. Many educators thus suggested that coding and programming courses be integrated into the mainstream curriculum for all schools. However, this is far from easy.

First, advocates believe mechanical logic and computational thinking is as fundamental as liberal education. Learning to code from a young age can help benefit youngsters' problem-solving abilities when exposed in a creative, playful and collaborative environment.

Second, programming experiences could provide an alternative way to explore the world – understanding how technological devices actually work in virtual world, and in doing so, children's potential could be maximized. More importantly, they argue that given the global high-tech competition, China should step up efforts in nurturing abundant qualified talents.

As early as 2014, the British government introduced computer programming into every classroom and later announced a new £500,000 fund to train teachers and professionals. Surveys show more than 16 EU countries officially include coding education in their school curricula.

In 2016, Google launched a research program – Project Bloks – intending to build a platform for developers and designers to provide tangible programming experiences for kids. This implies that coding education could form a crucial part of digital competency across the globe.

However, there are many who disagree, pointing out that it takes time and incredible efforts to revise a national curriculum, especially considering the regional education disparities in China.

True, the shortage of quality teachers is the main obstacle especially for public schools in China, let alone those in remote areas where internet is unavailable. And, opponents think how to write a coding textbook that suits students' learning pace is troublesome.

Furthermore, they argue that even if computer programming becomes part of the Gaokao (national college entrance exam) in future, the benefits, such as analytical skills, which coding education helps cultivate will be largely eclipsed by growing admissions strains.

As the debate unfolds, coding education is no longer unfamiliar to most Chinese parents and children in spite of constant doubts. There has been an increasing concern since private educational companies took the initiative and filled the market demand.

As is known, unlike school education, private tutoring classes can provide flexible schedules, customize teaching methods so that students won't find it a burden to learn a new "language." To help them understand coding concepts easily, some companies provide image-based coding systems and develop "coding games" for kids at a very young age.

It is reported that more than 160 companies in China have started to provide coding and programming courses, and, as of 2019, the market size of coding industry was about 3 to 4 billion yuan with a customer base of 15.5 million, which signals great room for further development.

Admittedly, it is true that children from well-off families are the majority, and, for most parents, these coding courses could give their offspring an edge over peers in a highly competitive environment. The emerging shift, however, represents a big move in China's educational revolution.

China has the largest education system in the world: 260 million students and complicated administrative divisions make the system not only immense but diverse. It is therefore of great difficulty and uncertainty to steer education reform.

Taking coding education as an example, given the lack of faculty and severe inequality, including coding literacy into national curriculum in one attempt is unattainable. Yet, fortunately the private sector has stepped up to the plate and is working as a "testing ground" before the whole community can accept the new mode.

Although the coding education reform will bring huge challenges, it also means great opportunities for students, private companies and the country.