OPINIONS Does the EU have the appetite to swallow all the US soybeans?

Does the EU have the appetite to swallow all the US soybeans? 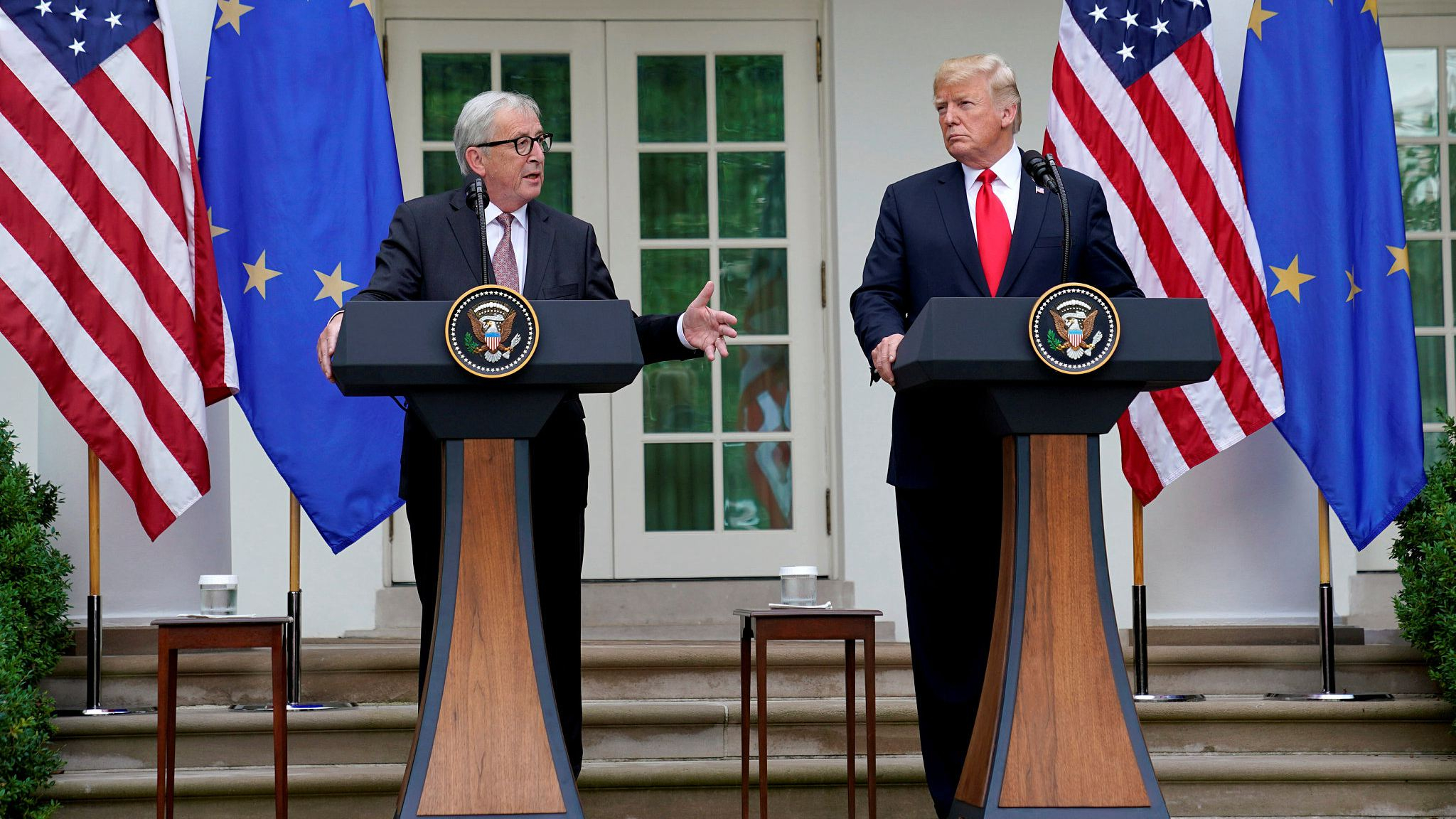 On July 25, US President Donald Trump, after talks with European Commission President Jean-Claude Juncker, announced that the two sides would not impose new punitive tariffs on one another while negotiations continued.

In a joint news conference after their meeting, Trump said that the United States and the European Union had agreed to work together towards "zero tariffs, zero non-tariff barriers, and zero subsidies on non-auto industrial goods."

However, the two sides seem to interpret the details of their agreement in quite different ways.

Trump appeared at a jobs event in Iowa on July 26, telling the audience: "We just opened up Europe for you farmers.... you have just gotten yourself one big market.” He also held up a baseball cap with the phrase "Make Our Farmers Great Again!" emblazoned on the front.

On the same day, US Trade Representative Robert Lighthizer told a Senate committee that "we are negotiating about agriculture, period."

However, a European Commission spokeswoman, Mina Andreeva, told reporters in Brussels that "When you read the joint statement, you will see no mention of agriculture as such, you will see a mention of farmers and a mention of soybeans, which are part of the discussions and we will follow up that."

French President Emmanuel Macron was quoted by AFP as saying that he was "not in favor of us launching a vast trade agreement, along the lines of the TTIP, because the current context does now allow for that," referring to the transatlantic free-trade deal which stalled two years ago.

The French president reaffirmed his opposition to including agriculture in any such deal, saying in the AFP report that "I believe that no European standard should be suppressed or lowered in the areas of the environment, health or food, for example."

Spanish Prime Minister Pedro Sanchez, for his part, said he was determined to "defend (the EU's) Common Agricultural Policy." Bloomberg quoted him as saying that "The Spanish don't believe in unilateralism, or that a specific economy imposes its policies and criteria in international trade."

So why are the US and the EU holding such divergent views on agriculture?

As is widely known, agriculture has always been a subtle issue in transatlantic trade, as both the US and the European Union are seeking to protect and advance their agriculture.

Statistics from the EU show the bloc provides 59 billion euros, or 68 billion US dollars, annually in agricultural subsidies. Meanwhile, The Economist has quoted stats from the OECD showing that the US government provided 33 billion US dollars in subsidies to farmers in 2016.

In fact, their sharp differences on agricultural issues have played a major part in causing the collapse of the Transatlantic Trade and Investment Partnership.

The EU has raised the issue of "Geographic Identifications," seeking to ban US products with generic names from entering the EU market, which drew stern opposition from the US. The EU is also refusing to allow the entry of American GM products.

All this is a reflection of the EU’s deep concern – that the old European model of family farming can't compete with the modern American business style of group operation.

This, despite statistics reported by the Wall Street Journal, as quoted by the US government, is showing a 9.4-billion-US-dollar agricultural trade surplus in favor of the EU.

Although some major EU leaders have refused to include agriculture within a trade deal in the spirit of "zero tariffs, zero non-tariff barriers, zero subsidies" proposed by President Trump, the EU has promised to move forward.

However, does the EU really have the capability to help Washington solve its soybean dilemma, brought about by China's counteraction?

The answer given by Bloomberg is negative. Its report says that the promise President Donald Trump extracted from the European Union to buy more soybeans from US farmers won't put much of a dent in the potential losses from a continuing trade war with China.

The EU is the second-biggest buyer of the US oilseed. But it comes a distant second to China, which bought 12.3 billion US dollars' worth of US soy last year compared with the 1.6 billion US dollars exported to the EU.

Losses in sales to China stemming from an escalating trade spat are causing political headaches for Trump and farm-state Republicans in Congress that Europe won't be able to relieve.

A Reuter's report, titled "Discount not discourse to boost US soy sales to EU," points out clearly that the recent deal reached between the US and Europe to increase the EU’s imports of American soybeans contains rather a symbolic meaning.

Before their meeting in the White House, the EU had begun to increase imports of US soybeans due to market prices, which are expected to be 20 US dollars per ton lower than that of South American soybeans in August.

According to AFP, a senior EU official insisted that markets alone will decide the level of EU imports of US soybeans.

The American investigative news agency Mother Jones points out that American soybeans account for about one-third of the total imports of the European Union. Even if European imports are increased, its help for American soybean exports will be limited.

Currently, American soybean prices have rebounded to 8.59 US dollars a bushel, against the backdrop of EU and the US foreign trade negotiations, as well as the US financial subsidies, but analysis carried out by the University of Illinois believes that US soybean farmers still cannot make a profit unless the soybean price rises to 10.05 US dollars a bushel.

For US soybean farmers, they'd prefer a stable export market than a relief check issued by the government.

The new European market that the Trump administration has sought for them has much less of an appetite to consume all the soybeans rejected by China.

For over 3.1 million farmers in the United States, they are losing the Chinese market that they’d been working hard on for decades, which simply could not be made up by relief checks.