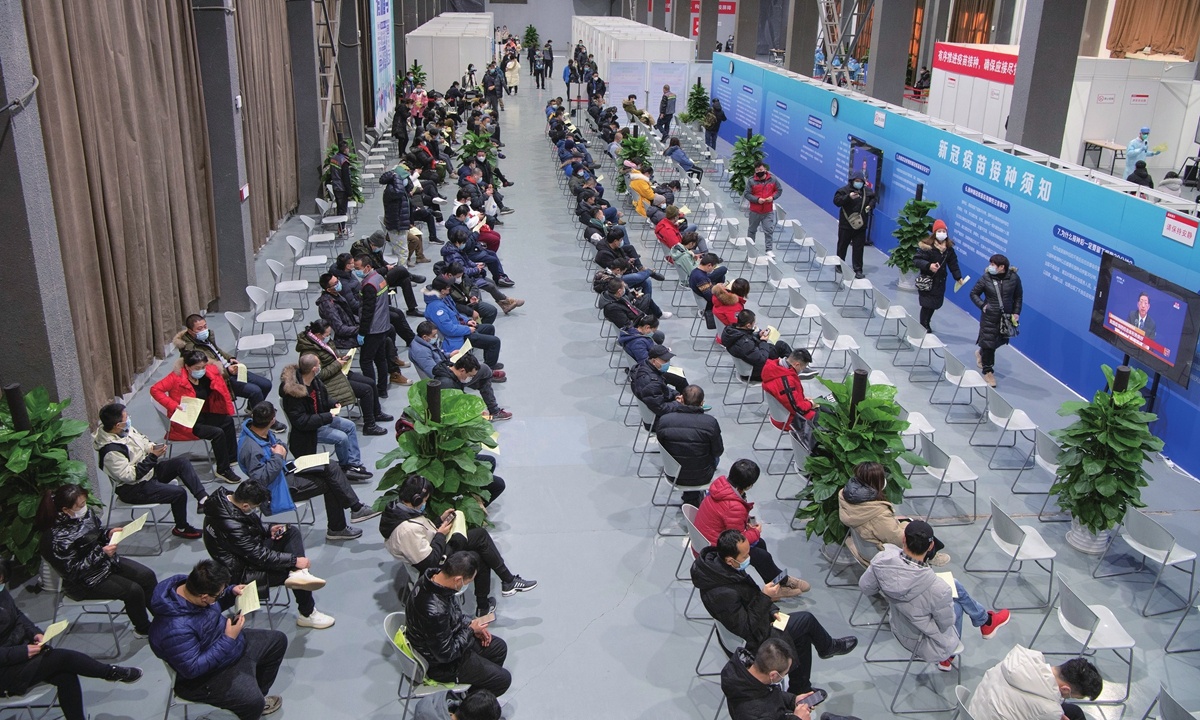 People wait for COVID-19 vaccine injections in Beijing on Sunday. Since the beginning of January 2021, the city has started vaccination in specific groups of people in industries such as catering services and cold-chain transportation.(Photo: cnsphoto)

Indonesia has praised China for its vaccines. So far, almost all glowing praise for Chinese vaccines has come from foreign governments. China itself has been cautious in its stance, and the approval of Sinopharm COVID-19 vaccines is conditional. This serious attitude and good results recognized by foreign countries boost the reputation of China's vaccines.

India has also approved a domestic developed vaccine with Prime Minister of Narendra Modi eulogizing that the "approval to vaccines…accelerates the road to a healthier and COVID-free nation."

US President Donald Trump has also previously been generous in his praise of Pfizer's vaccines.

By contrast, China is a country that doesn't brag about itself but lets the real results, the data, and public praise from different countries tell the story.

In the global COVID-19 vaccine "race," several vaccines from China have performed well. The names of Sinopharm and SinoVac have quickly become well-known among ordinary Chinese. This has boosted the reputation of the whole Chinese biopharmaceutical industry.

In previous years, problems with Chinese medicine, including vaccines, have led to a public distrust of domestic pharmaceuticals and a growing superstition about imported medicines. In fact, if these problems are examined closely, people will see the vast majority of them are not the result of technical incompetence. They are the result of defaults in the management systems of the industry. Such problems can be overcome with determination of improving management.

Large-scale phase-3 clinical trials of China-made vaccines have been carried out in quite some countries. The vaccines have withstood the tests. The trials were carried out independently and the results show far higher efficacy rate than the standard proposed by the World Health Organization. In addition, none of these vaccines have resulted in serious adverse reactions, demonstrating their full reliability.

In fact, according to overseas media reports, more than 10 countries have ordered China-made vaccines so far.

I have a hunch that the public's acceptance of domestic COVID-19 vaccines will have a chain reaction effect. Perhaps this will become a turning point and thus change attitudes of Chinese people toward domestically produced drugs. Of course, this will require further efforts by China's biopharmaceutical industry to consolidate the reputation earned by domestically produced COVID-19 vaccines.

In the past, when many people went to see a doctor, they were usually asked whether they wanted to use domestic medicine or imported medicine. The price of the latter is often several times as expensive as the former one. I hope that era will gradually come to an end, as well the days when some families believe only in foreign vaccines.

With such a large population, it is impossible for China to assure the health of all people with imported medicines. The biopharmaceutical industry in China has developed rapidly in recent years. The whole industry needs to speed up to mature comprehensively to serve the people of this country and also make contributions to the world.