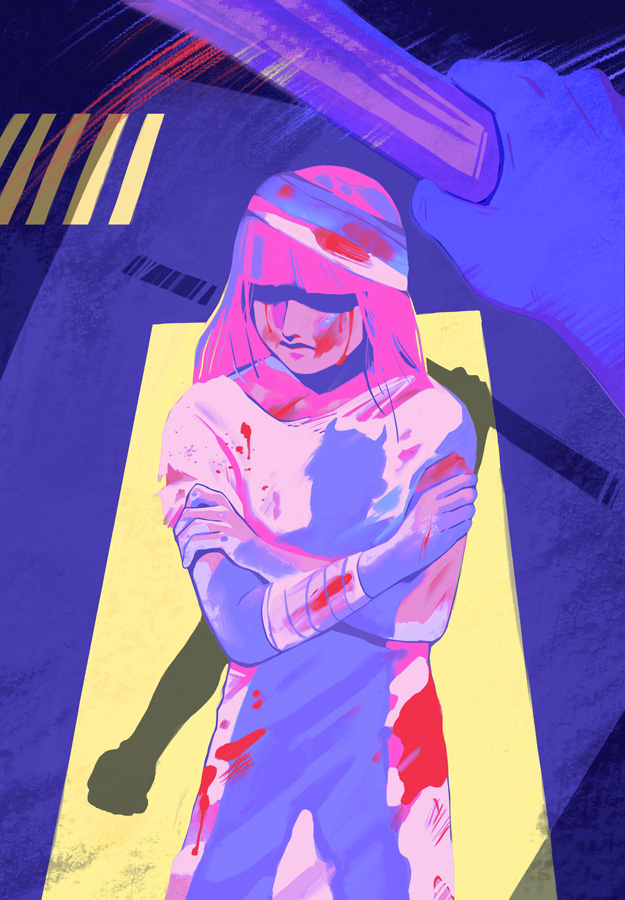 More help provided, but many victims reluctant to speak out

A woman in Sanming, Fujian province, finally ended her marriage in court last week after calling police seven times to complain that she had been a victim of domestic violence.

At her hearing in Sanming Intermediate People's Court, Guo Jie, the judge handling the case, arranged for the woman to receive psychological aid and for her to live in a shelter in the city for about a month to prevent her from being harmed again.

Guo said she could not be sure if the woman would be able to live a normal life in the future, but her bravery in speaking out to police against domestic violence and in approaching the court to stop her "nightmare" should be applauded.

"Domestic violence is an inevitable issue that cannot be ignored when hearing family-related disputes," Guo said, adding that the number of divorce hearings caused by such cases has also been rising.

In March 2016, the country's first law against domestic violence took effect. "Many people didn't realize they had suffered this form of violence before the law was adopted," the judge said. "But since then, some have started to wake up and escape their nightmares."

Under the law, acts between family members, including assault, frequent insults, threats, mental harm and restricting personal freedom, are identified as domestic violence. Women's federations also play a leading role in working with other departments, including courts, civil affairs authorities and public security bureaus to better deal with such cases.

Liu Jiecen, a lawyer with the family legal counseling team at the Beijing Yinghe Law Firm, said the new law marked a turning point in drawing public attention to domestic violence. "From that year (2016), more people began discussing the issue and turning to me for legal advice," she said.

"The increasingly high attention now being paid to domestic violence is very important. When more people understand that such violence is about harm, instead of just being a small family dispute, the problem will be resolved gradually and effectively."

Both Guo and Liu highlighted the significance of the Personal Safety Protection Order, a right granted by law to victims of domestic violence or those who face such a risk. They compared the order to a "firewall", and said it had already played a big role in stopping violence.

By December last year, courts had received 5,860 applications for protection orders, of which, 3,718 were granted after review, according to a statistic from the top court in March.

But Li Ying, who helped launch a family and community development and service center in Beijing's Dongcheng district, suggested the threshold for applying the orders be lowered, or easier access be provided to victims to receive help.

Li said additional rules also need to be drawn up and clarified, such as stating how police can be trained to distinguish cases of domestic violence from other arguments or fights, adding that there is still a long way to go.

The issue has frequently made headlines since a beauty vlogger from Chongqing posted a 12-minute video last month accusing her former boyfriend of domestic violence.

Using the pseudonym Yuyamika, 28-year-old He Yuhong discussed in the video five incidents of violent abuse she had experienced at the hands of her ex-boyfriend, surnamed Chen, since April 8.

The video also included surveillance footage of Chen dragging her out of an elevator in their building, along with interviews with two women, who claimed to be Chen's ex-wives, saying they had experienced physical abuse, threats and mental torture at his hands.

The Chongqing Women's Federation expressed strong condemnation of all forms of domestic violence and offered assistance to He.

On Nov 28, Chen, 44, was given 20 days' administrative detention and a fine by police in Chongqing's Jiangbei district for causing intentional injury.

Under the Public Security Administration Punishment Law, 20 days is the longest period of administrative detention that can be given.

On her Weibo account, He said she was grateful for the timely investigation, but added that Chen could have faced harsher punishment if she had provided evidence of her injuries and reported the matter to police when she was first assaulted.

Liu, the lawyer, applauded He for saying "no" to domestic violence, adding: "Many clients of mine are afraid to speak out. They are hesitant about stopping a relationship with their attackers, let alone ending their marriages."

A woman, who declined to be named, said: "I was irrational when I was violently abused by my husband. I even wanted to assault my child, as I couldn't bear the great pain sometimes.

"The first time my husband slapped me, I didn't think of turning to others, because I thought he might face difficulties at work, or he was anxious about our child's studies," she said.

"He apologized, and I forgave him. But to my surprise, this was not the end. The assaults happened again and again."

Although Liu suggested that the abused woman report an incident of domestic violence to police and ask for help from her community committee, the victim was still unwilling to give up her marriage. Now, she and her husband are receiving psychological help provided by Liu's team.

The victim said, "My parents disagreed with me about divorce, but I feel scared, especially when my husband is at home."

Liu said: "Domestic violence runs in circles, or cannot be completely stopped in a short time. Instead, it will become serious if a perpetrator is not stopped and punished promptly."

Liu said that compared with most people in Western countries and some well-educated Chinese, many in the country think women should always be subservient in society and marriage, "so they (the victims) regard domestic violence as shameful and want to cover up it".

Beijing News reported on Saturday that since the beginning of this year, women in France have staged two protests to fight domestic violence－one in July and the other last month.

Liu said: "Different family cultures and traditions are major causes of different outcomes, and Chinese society often puts a victim under pressure, instead of creating an environment to speak out."

But she said domestic violence has also been difficult to eliminate in the West. In the United States, the National Coalition Against Domestic Violence said about 85 percent of victims found it hard to break off a relationship after they had been abused.

In addition, some Chinese women refuse to be deterred by domestic violence, because they don't want their children to be without a father, according to Liu.

Liu said that on their first meeting, the woman named only as Han, 32, looked pale and older than her age, and her hands were trembling.

The homemaker often asked the lawyer how she could win custody of her 4-year-old child in the event of a divorce, but she did not mention she had been the victim of domestic violence until the fourth phone call between them.

"After a fifth call, we decided to meet each other, but Han then disappeared. She didn't answer my calls, let alone text messages," Liu said. "Several days later, she told me her husband had promised to mend his ways."

In June, Han called Liu once more to arrange another meeting, but she disappeared again. "Such women do not realize that family abuse is also harming their kids," Liu said.

In December last year, China Women's News reported that fewer than 10 percent of Chinese women who experience domestic violence call police for help, and only turn to them after experiencing such incidents 35 times on average.

The law against domestic violence highlights the importance of joint efforts in solving the problem. Since it was introduced, interorganizational cooperation has taken place nationwide.

For example, Beijing Xicheng District People's Court has worked with the local women's federation, public security authority and justice bureau to set up a mechanism to combat domestic violence.

Cao Qiaoqiao, an assistant judge with the court, said: "We often sit together to discuss new problems on this issue. The women's federation is in charge of recording domestic violence reports, while police are asked to answer the reports promptly, to file cases if necessary. The justice bureau is responsible for giving legal aid for victims."

Referring to those willing to apply for a personal safety protection order, which was written into the law to help victims of domestic violence or those facing such a risk, "our court will supply them with a quick channel to ensure their applications can be accepted efficiently", Cao said.

The law stipulates that courts should decide whether to issue the order within 72 hours, or 24 hours in cases of emergency.

From 2016 to June 30, Cao's court issued 39 such orders, which played a role in keeping social stability and harmony.

Li Ying, from the Beijing social organization, applauded the law and the orders, as well as the increased attention being given to domestic violence. But she is concerned that a lack of punishment for perpetrators who disobey protection orders will exacerbate the problem.

She said that in Taiwan, victims of domestic violence cannot be refused psychological help and job opportunities, along with lower-priced rental houses, adding, "This is better than the shelters we offer for victims to stay in temporarily."

In view of the difficulties in collecting evidence, she suggested that lawmakers lower the threshold for applying for protection orders. She also called for public security departments nationwide to draw up a guideline as soon as possible outlining how to question victims in their homes, how to evaluate the risk of domestic violence and how to better deal with such cases involving juveniles.

She said a shortage of police officers can be understood, "but unregulated handling of cases may bring greater harm to victims. We've seen achievements in fighting domestic violence, but we still have a long way to go."