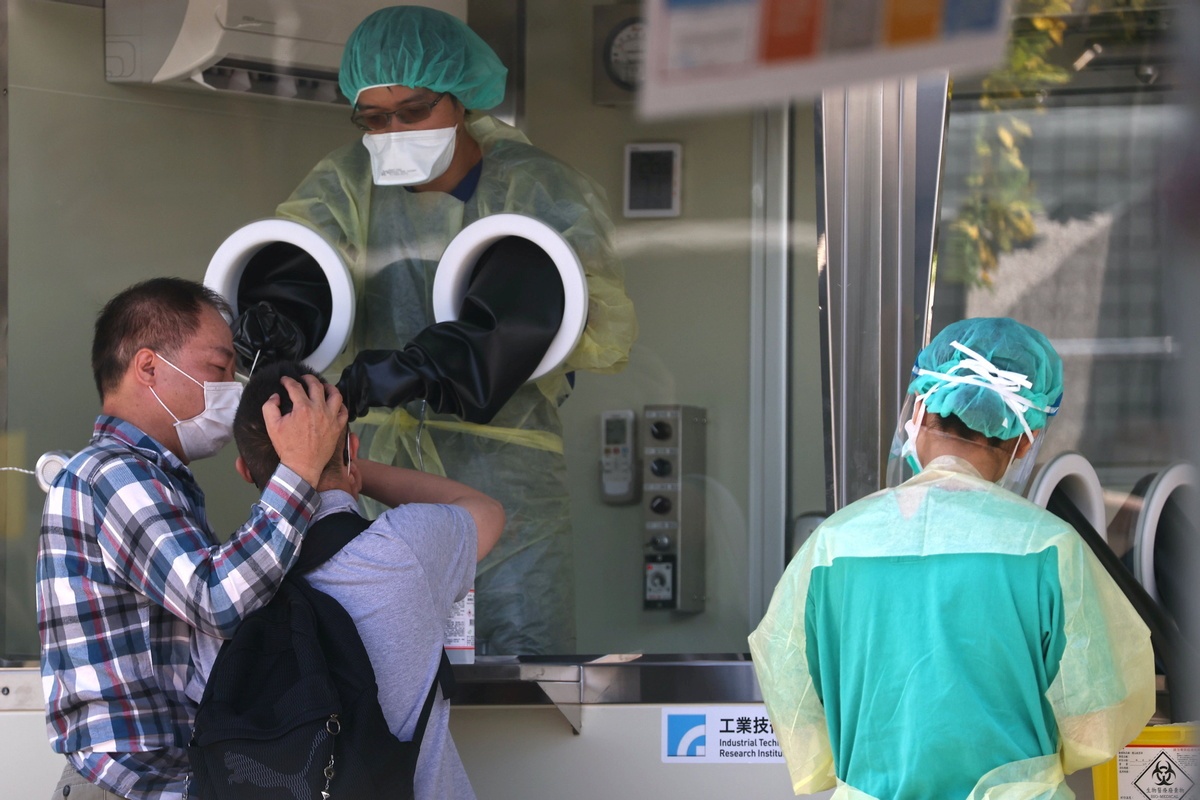 Medical workers use a rapid test for COVID-19 on a Taiwanese resident following an increasing number of locally transmitted cases in Taipei, on May 25, 2021. (Photo: Agencies)

Despite the island's independence-minded Democratic Progressive Party trying to portray it otherwise, the rejection of the proposal that Taiwan be allowed to participate in the World Health Organization's annual assembly has nothing to do with Taiwan people's fight against the resurgence of the novel coronavirus on the island.

The well-being of Taiwan compatriots is always of concern to the Chinese mainland, especially in times of difficulties. That's why the mainland offered to provide vaccines and send its epidemic prevention and control experts to share its experience with Taiwan's medical and health professionals soon after the COVID-19 pandemic situation on the island took a turn for the worse recently.

Yet that gesture of goodwill has received a cold shoulder from the island's DPP government, which is only interested in politicizing the health issue for its own political gain, rather than working to protect its people from the disease.

To justify the confrontational approach it has taken against the mainland, the island's top health official Chen Shih-chung has gone so far as to claim that the mainland's vaccines are not safe and most residents in Taiwan do not want to take them, despite the fact that the mainland has vaccinated more than 400 million of its people and shared the vaccines with dozens of countries worldwide without any problems emerging.

Since the island is still struggling to control the latest outbreak, with 281 new local infections and six deaths reported on Tuesday, the most urgent task for the island's authorities is to increase its low vaccination rate — which now stands at about 1 percent of the population — as soon as possible.

Its low vaccination rate is primarily caused by a shortage of vaccines. And although the island has ordered more than 20 million doses of the AstraZeneca and Moderna vaccines, the first batch will not arrive until the end of June. By rejecting the mainland's offer of vaccines, the Taiwan authorities are risking people's lives, as they are losing the race against time in the fight against the coronavirus.

In contrast to its not so timely response to a spike in infections, the DPP has wasted no time or opportunity to vilify the mainland, trying to portray it as being the one putting people's lives at risk by isolating the island from the international anti-epidemic endeavors and preventing it from getting vaccines.

To the contrary, since the early stages of COVID-19, the mainland has timely updated Taiwan about the situation and approved the participation by Taiwan health experts in 16 WHO technical activities. Blood is thicker than water. This is a fact that Taiwan authorities can never change whatever political tricks they play.