Duke VP under fire for 'racist and insensitive' posts about China

Larry Moneta, vice president for student affairs at Duke University in Durham, North Carolina, United States, is under fire from students over some controversial social media posts in which he gave reasons to not move to China.

During his visit to China last week, Moneta posted a series of photos with the caption: “Reason to move to China…NOT!”

He gave a total of three reasons not to move to China. The photos included two bags of Lay’s potato chips, one with a flavor of Mexican Tomato Chicken and the other with a flavor of Italian Red Meat, an unhealthy air quality reading of 152, and a squat toilet.

In fact, many Chinese people like the unique chip flavors and just because they are not common in the United States does not mean they are bizarre. Regarding air quality, China is still a developing country but is cleaning up its air pollution at a rapid rate. And regarding squat toilets, many Asian people actually prefer using this type of toilet because they think that it is more sanitary. 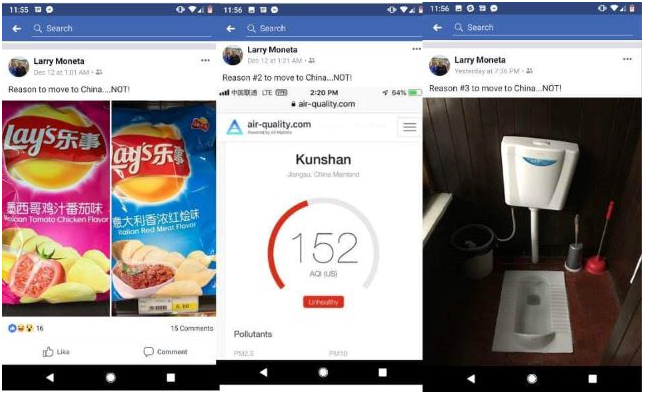 The posts were deleted, but not before screenshots made their way onto a Duke Facebook group, prompting a statement from at least two student organizations.

The Asian Students Association (ASA) of Duke University reposted the photos on the organization’s Facebook page along with a statement condemning Moneta’s offensive posts about China.

“While on his visit to Duke Kunshan University this week, Larry Moneta made racist and insensitive posts on his Facebook,” read the statement dated Dec. 13.

“These may seem like just ‘jokes,’ but these jokes reveal racist and orientalist assumptions that China and Chinese people are dirty and unsanitary,” it added.

ACA accused Moneta of a double-standard in criticism, saying that while China does have its share of problems, the United States has taken steps backward on a number of important issues, including among other things, withdrawing from the Paris Agreement and slashing funding for environmental protection.

The student association also criticized Moneta for finding issue with the style of toilets used in China and many other parts of Asia.

“As VP of Student Affairs, it is egregious Moneta would denigrate the cultural practices of many of the students he supposedly cares about and also disparage the home of many of these students,” the statement read.

The student organization called it simply “inappropriate and hypocritical” for Moneta to go to China, visit his university’s partnership with Duke Kunshan, and joke about why people should not move to China.

It ended by saying that Moneta should “critically confront what kind of legacy of cultural insensitivity and racism he is leaving behind,” as the vice president of student affairs will step down from his position after the end of the academic year, according to an announcement made in August.

Duke University’s Chinese Student Association (CSA) also put out a statement regarding the posts made by Moneta.

“Duke Chinese Students Association is appalled and disappointed by the culturally insensitive photos posted by Vice President for Student Affairs Larry Moneta on social media during his visit to Duke Kunshan University,” read the statement by CSA, which is also dated Dec. 13.

“Moneta has chosen to judge the cultural norms of another country using American standards and spreading such highly [judgmental] opinions on an open platform, neglecting the feelings of all students of Asian heritage on Duke campus,” the statement continued.

The statement then added: “As a university administrator making an official visit to Duke’s partnership University in China, Moneta should have been more mindful of his role and what kind of message his speech conveys.”

The association accused Moneta of acting counter to the mission that Duke Kunshan seeks to promote and expressed distressed over the cultural insensitivity being institutionally perpetuated by one of Duke’s leadership figures.

It concluded: “We do acknowledge that our motherland has much to improve, and we welcome all forms of international cooperation and cultural exchange with good intentions along the way. However, we sincerely hope such incident of woefully inappropriate judgement and blatant cultural insensitivity would not happen again.”

The Chronicle, Duke’s student newspaper, reported that Moneta has decided to take a “hiatus” from social media after facing strong backlash.