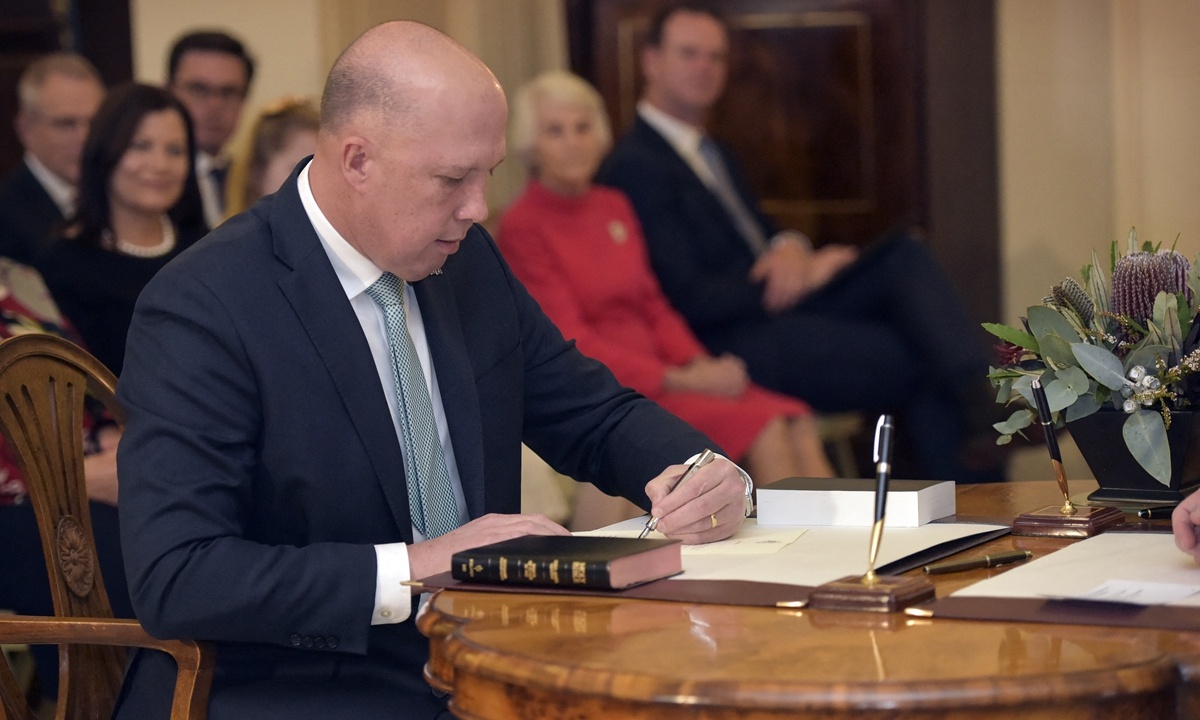 Australian then Minister for Home Affairs Peter Dutton signs documents during an oath taking ceremony at Government House in Canberra on May 29, 2019. (Photo: AFP)

In a Sky News Australia interview on Sunday, newly appointed Australian Defence Minister Peter Dutton said that Australia wants to "make sure that there is peace in the Indo-Pacific region, that [they] can work in a collaborative way with the Chinese Communist Party… and others across the region"

Dutton added, "We will continue to work very closely with countries like China as well because that's a very important partnership." "All of us want to see emerging super-nations like China, and existing ones like the United States, work closely together," he said.

Based on previous statements he made as an administration minister, Dutton is clearly from the more conservative wing of the Liberal Party - and he has been quite hawkish on China. Now, he has made a seemingly reversal of statement as he assumes office. It is normal for an official to make different statements at different posts. But to judge his real thoughts, his specific statements on more specific issues can be more telling.

Dutton has emphasized US-Australia alliance in his words. However, it's nothing new for him to do so, since successive Australian defense ministers all have made such statements. Dutton said in the interview that Canberra will work "with the Chinese Communist Party", rather than "with China." This is a subtle difference that reflects Dutton's own conservative political stance and ideological bias against China. And China needs to pay attention to this. This time, although expressing a willingness to work with "China", it sounds more like diplomatic language. Now we need to wait and see what tangible actions he will take in office.

Dutton said Australia does not support the militarization of ports. Nor does it support any attempt by any other country to "exert influence here via cyber or other means". Canberra has been accusing Beijing of trying to strengthen its influence in Australia and interfere in its politics. For example, in March China was accused of launching a cyber attack on Western Australia's Parliament in the middle of the state election campaign. Therefore, Dutton's remark is apparently a clear allusion to China.

Clearly, Canberra has its own calculations. Australia, on the one hand, wants to work collaboratively with China and Asia for economic interests. On the other hand, it sees itself as part of the Western world and cannot get rid of its false preconceptions about China.

There are two main reasons for the deterioration of China-Australia relations. One is that Australia's policy toward China is influenced by the US' China policy. Right now that means following Washington's moves to contain the rise of China. As a result, Australia is willing to act as an anti-China vanguard. The other reason pertains to this fact: Canberra is still held hostage to its deeply-rooted Cold War thinking and ideology. As such, the country has lost its rational and objective stance in handling relations with China.

Dutton's rhetoric indeed reflects the biggest difficulty that Australian diplomacy is encountering. It is how to deal with its China relations under the framework of US-Australia alliance. Dutton's narrative of wanting to work in a collaborative way with China does not mean he is really willing so - but has to do so anyway.

This is because Canberra must face the fact that China has been an important presence in the region, and the world. Whereas China-US relations have remarkably changed, Australia cannot avoid being impacted. Against this backdrop, Canberra is unlikely to adopt a policy which offends neither of China nor the US. Australia is a close ally of the US. It is anticipated to see Canberra tethered tightly to Washington's chariot whatever the damage with its relations to China might be.

Dutton's appointment was made when the Morrison cabinet encountered enormous challenges. It was not a deliberate decision. When bilateral relations between China and Australia hit all-time lows, judging from Dutton's prior political manners, this appointment can hardly be favorable to China. However, working as a member of Morrison's cabinet, Dutton alone cannot fully affect the direction of Australia's China policy.