Earliest COVID-19 deaths in US fuel suspicion over virus birthplaces 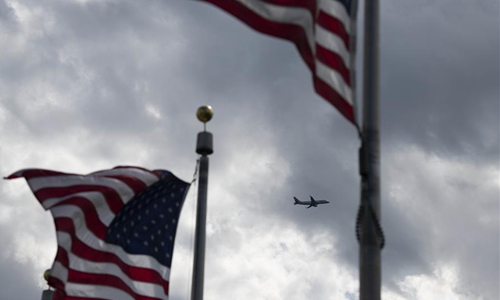 A plane flies in the sky with the U.S. national flags in the foreground in Washington D.C., the United States, on April 21, 2020. The number of COVID-19 cases in the United States topped 800,000 on Tuesday with deaths surpassing 43,000, while Americans are increasingly divided over when and how to reopen the economy. (Photo: Xinhua)

Experts said the fact that two US residents with no "significant travel history" died of COVID-19 weeks before the initially known first US death from the virus supports the theory that the virus may have multiple birthplaces around the world.

US media outlet CNN reported Wednesday that "new autopsy results show two Californians died of novel coronavirus in early and mid-February - up to three weeks before the previously known first US death from the virus." The two had no "significant travel history" that would have exposed them to the virus, the report said.

Yang Zhanqiu, deputy director of the pathogen biology department at Wuhan University, told the Global Times on Thursday that with the two now standing as the country's first documented fatalities attributed to the virus, it would not be surprising if some cases in late 2019 diagnosed as influenza in the country were connected with the coronavirus.

"If the coronavirus had spread in late 2019 in the country, then it's reasonable that the two cases died of the virus with no significant travel history," Yang said.

Robert Redfield, director of the Centers for Disease Control and Prevention (CDC) said in March that some COVID-19 deaths may have been diagnosed as flu-related in the US.

Yang noted that Wuhan in Central China's Hubei Province was one region where the coronavirus broke out, but whether the region is the birthplace or sole birthplace of the virus is yet to be confirmed.

The COVID-19 may have multiple birthplaces around the globe, Yang said.

Also, Yang noted that the coronavirus in different regions around the globe appears to have distinguishing pathogenicity. "That's why the fatality rate of the disease in some regions is relatively high while in others it's low."

In late February, researchers from Xishuangbanna Tropical Botanical Garden affiliated with the Chinese Academy of Sciences and the Chinese Institute for Brain Research analyzed genomic data from 93 samples of the novel coronavirus. They suggested the coronavirus was introduced from outside the Wuhan seafood market.

According to a report in March 26 by Reuters, some researchers said that a higher than usual number of cases of severe pneumonia and flu in Lombardy, Italy, in the last quarter of 2019 may indicate that the new coronavirus might have spread there earlier than previously thought.

Given the complexity of the disease and limited knowledge about it so far, people should not rush to conclusions and should respect science, experts reached by the Global Times noted.

The experts called on the international community to fight against the pandemic hand in hand, which is "the only way for our human beings to win the battle."