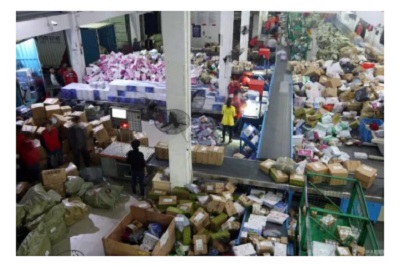 Double-11 has passed with millions of shoppers’ “buy, buy, buy” dreams satisfied. However, what are the hidden costs of the low prices?

Data shows that E-commerce giant Alibaba’s Double-11 sales hit a record 1.6 billion yuan a mere 10 seconds into the event. But the shopping carnival created side effects. With each shopper’s dream being delivered, a huge amount of plastic bags and paper boxes left a "garbage mountain, garbage sea" which have blossomed across China.

Maybe you will have the same experience as I did, that some of the orders we received were excessively packaged: A bottle of shampoo is wrapped in a few layers, a lipstick entwined with circles of adhesive tape. Experts say excessive packaging for products sent through couriers to meet the demand is generating increasing amounts of trash, and the existing recycling system cannot cope with it.

Last year alone, 16.95 billion meters of adhesive tape and 9.9 billion boxes were used for online orders. In 2016, up to 31.3 billion packages were delivered in China, which could cover 400,000 football fields. In fact, what makes this all the more horrible is that this number could rise to 50 billion by 2018, according to a report issued by the State Post Bureau (SPB).

It has been reported that one-third of Chinese cities are expected to be beset by garbage due to limited trash disposal options. Many problems exist without clear solutions, which could spark environmental issues for years.

The most common solution is landfill. Issues with this practice lie in its glut for land and the slow decomposition of garbage buried underground, which often takes as long as hundreds of years to decompose.

Another option is incineration, but this could lead to air pollution. According to one environmentalist, the non-biodegradable plastic bags and tape used on packages could mean annual carbon dioxide emissions of 20 to 30 million tons.

Finally, we might consider dumping garbage into the ocean. However, millions of tons of plastic waste have already been poured into it every year, which we know has begun to affect marine life,  which compromises or endangers the fragile food chain which we rely upon.

The garbage problem caused by enormous amounts of plastic waste can be described as “shocking," and the problem will become more serious as the courier business flourishes. If we don't take measures to "clean up" the junk in time, the "trash encirclement" will probably become a reality.

So the government, e-commerce platforms, courier companies and consumers should all realize the seriousness of this problem. It’s time to facilitate garbage classification, to promote environmentally friendly packaging materials, to tighten rules on excessive packaging and to improve the recycling system.