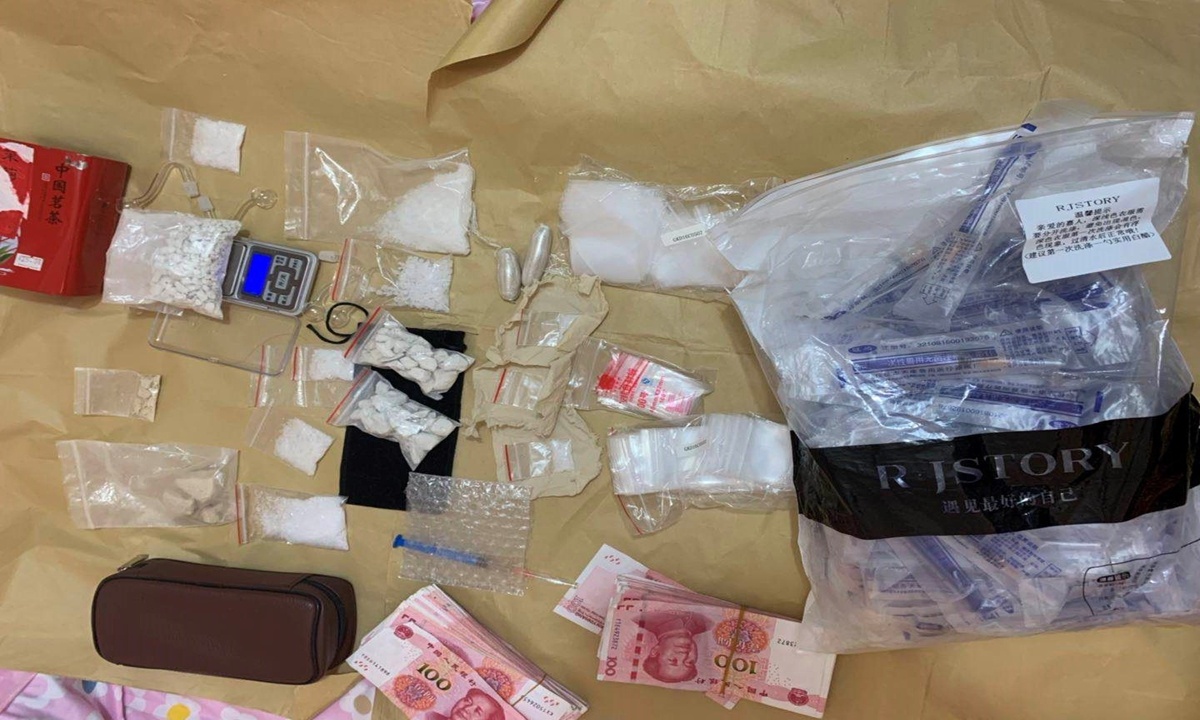 Beijing police have solved over 60 drug-related crimes from the beginning of this year until July, with a total of 9.3 kilograms of various types of drugs seized by police. (Photo: courtesy of Beijing police)

Shanghai Customs authorities said on Monday that they recently intercepted cocaine, heroin and methylaniline in three drug smuggling cases involving express mail on the same flight on the same day at the Shanghai Pudong International Airport.

As international travel has been curbed significantly amid the COVID-19 pandemic, the number of cases involving drugs trafficked through express delivery has increased. Yet, the detection of the cases indicated that China's narcotics control work has always been quick to adapt to new criminal tactics.

The harm that drug abuse once brought to the Chinese nation is known to the world. The Chinese government takes a zero-tolerance attitude toward drug-related crimes. On Tuesday, the High People's Court of Liaoning announced to uphold the death sentence for Robert Lloyd Schellenberg, a Canadian convicted of drug smuggling in China in 2018, in second trial.

While many people are more concerned about the social consequences of drug abuse - which often leads to other crimes like robbery and theft and is thus seen as one of the root causes endangering social stability and security - it should be pointed out that drugs have also caused serious socio-economic damage that cannot be underestimated. The direct economic loss caused by drug abuse could reach 500 billion yuan ($77.1 billion) annually, with the indirect economic loss exceeding 1 trillion yuan, an official from the Ministry of Public Security told the media.

For instance, substance abuse is also an obstacle for China's poverty relief work. The return of extreme poverty is common to see among drug users. The high relapse risk makes it very hard for drug users to find jobs, who often live in poverty and may be pressured by the economic burden to engage in drug trafficking. Therefore, it is necessary for local authorities to tackle with these cases with narcotics control and poverty relief in a more comprehensive way, which is of great significance to ensure the health of the Chinese economy.

In addition, against the backdrop of the growing drug abuse worldwide, pragmatic international cooperation in narcotics control is also essential. For a long time, China and its neighboring countries have been trying their best to eliminate drug-related crimes that undermine the sustainable development of their economies and societies.

As a result of a 100-day joint anti-drug operation that was recently concluded on the Mekong River among law-enforcement authorities from China, Laos, Myanmar and Thailand, a total of 85 drug rings were busted, with 132 suspects arrested and over 8.4 tons of drugs seized, Xinhua News Agency reported last month.

Despite the positive results, more effort is still needed to crack down on the regional drug trafficking activities, so as to bring long-term benefits to regional economic and trade cooperation.