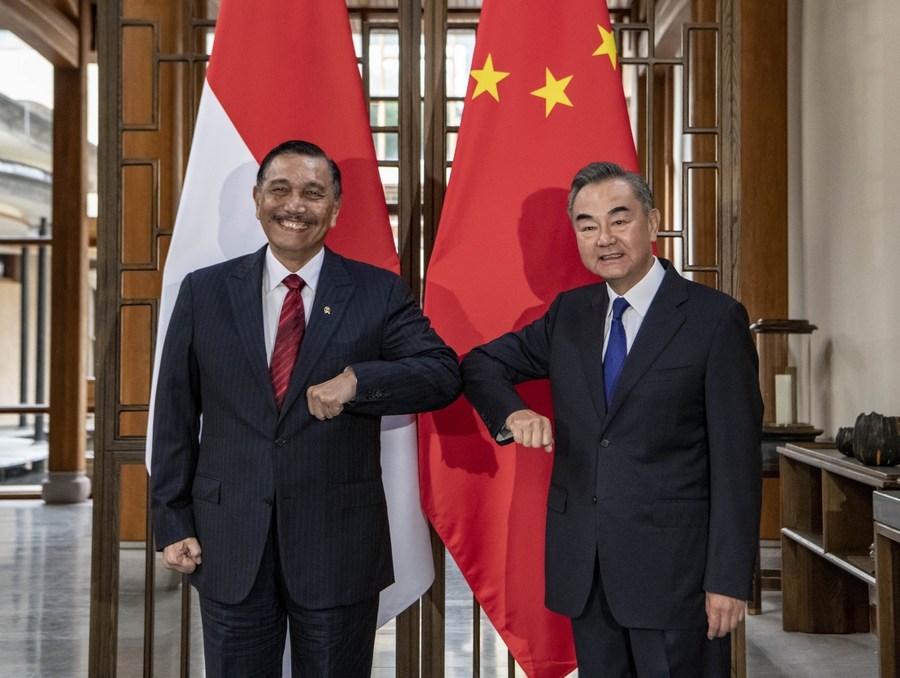 BEIJING - Economic cooperation between China and the Association of Southeast Asian Nations (ASEAN) has been strong and resilient, with huge potential, said Chinese State Councilor and Foreign Minister Wang Yi on Friday.

Wang made the remarks in an exclusive interview with Xinhua after he held talks last week with Luhut Binsar Pandjaitan, Indonesian president's special envoy, and Philippine Foreign Secretary Teodoro Locsin in Southwest China's Yunnan province, and upon wrapping up his Southeast Asia tour, which has taken him to Cambodia, Malaysia, Laos, Thailand and Singapore.

Wang noted that a new economic development pattern featuring "dual circulation," in which domestic and overseas markets complement and reinforce each other, with the domestic market as the mainstay, has been a major strategic deployment by the Chinese government.

"China will promote high-quality development and build a new system of an open economy of a higher level," Wang said. "The scale of the domestic market will be further expanded. The combination of the domestic and international markets will be closer. There will be more room for cooperation between countries and China."

China is ready to work with ASEAN countries to implement an upgraded China-ASEAN Free Trade Area protocol and sign the Regional Comprehensive Economic Partnership within this year, continue to make the China International Import Expo and the China-ASEAN Expo a success, and import more products needed by the Chinese market from ASEAN countries, Wang said.

China is ready to help more countries get access to and be able to afford the vaccines, help countries eventually overcome the epidemic, and make China's contribution to safeguarding the lives, health and safety of people in the region and around the world.

The Chinese senior official said that the East Asia region has long been upholding the Asian values of solidarity and coordination, conforming to the trend of the times of globalization, following the right path of multilateralism, and maintaining the ASEAN-centered regional structure.

This has ensured the smooth and healthy development of East Asia region cooperation and achieved important and positive results, turning the region into a place that features the best development vitality and potential in the world and one that has led the world in combatting the COVID-19 pandemic and pursuing recovery in the post-pandemic era, Wang said.

Wang stressed that history and reality have testified that the ASEAN-centered regional cooperation structure fits the situation of the region, is widely recognized by all parties and has strong vitality.

The Chinese foreign minister also mentioned that China is the first major country to accede to the Treaty of Amity and Cooperation in Southeast Asia and to forge a strategic partnership with ASEAN, and also the first major economy to set up a free trade zone with ASEAN.

The continuous development and elevation of China-ASEAN relationship has strongly promoted the stability and prosperity of this region, said Wang.

Wang noted that China will continue to join hands with ASEAN countries to stick to multilateralism with East Asia characteristics, abide by the basic principles of regional cooperation, and safeguard the mature framework of regional cooperation, so as to make positive contributions to lasting peace and prosperous development of the East Asia region.

Wang also said that in the current world, information technology has been advancing with leaps and bounds. New forms of business and patterns of digital technology such as e-commerce, video conferences, online medical care and online education has become the new driving forces to hedge against the negative effects of the pandemic and promote recovery.

However, Wang pointed out that frequent cyber attacks and rampant "data bullying" have made data security a general and common concern of all countries. Under such circumstances, the Global Initiative on Data Security proposed by China has become the China solution to this problem.

At the 53rd ASEAN Foreign Ministers' Meeting and related meetings in September, the Philippines, representing ASEAN countries, said China's proposal has reflected the common concerns of all countries, and ASEAN countries would like to join hands with the Chinese side to actively push forward cooperation in global digital governance and cyber security.

The Chinese senior official said this time he has made further introduction of the proposal to various countries' leaders and foreign ministers, who all welcomed and agreed on it and expressed willingness to conduct more detailed researches and discussions, so that plausible, specific and detailed plans could be formulated.