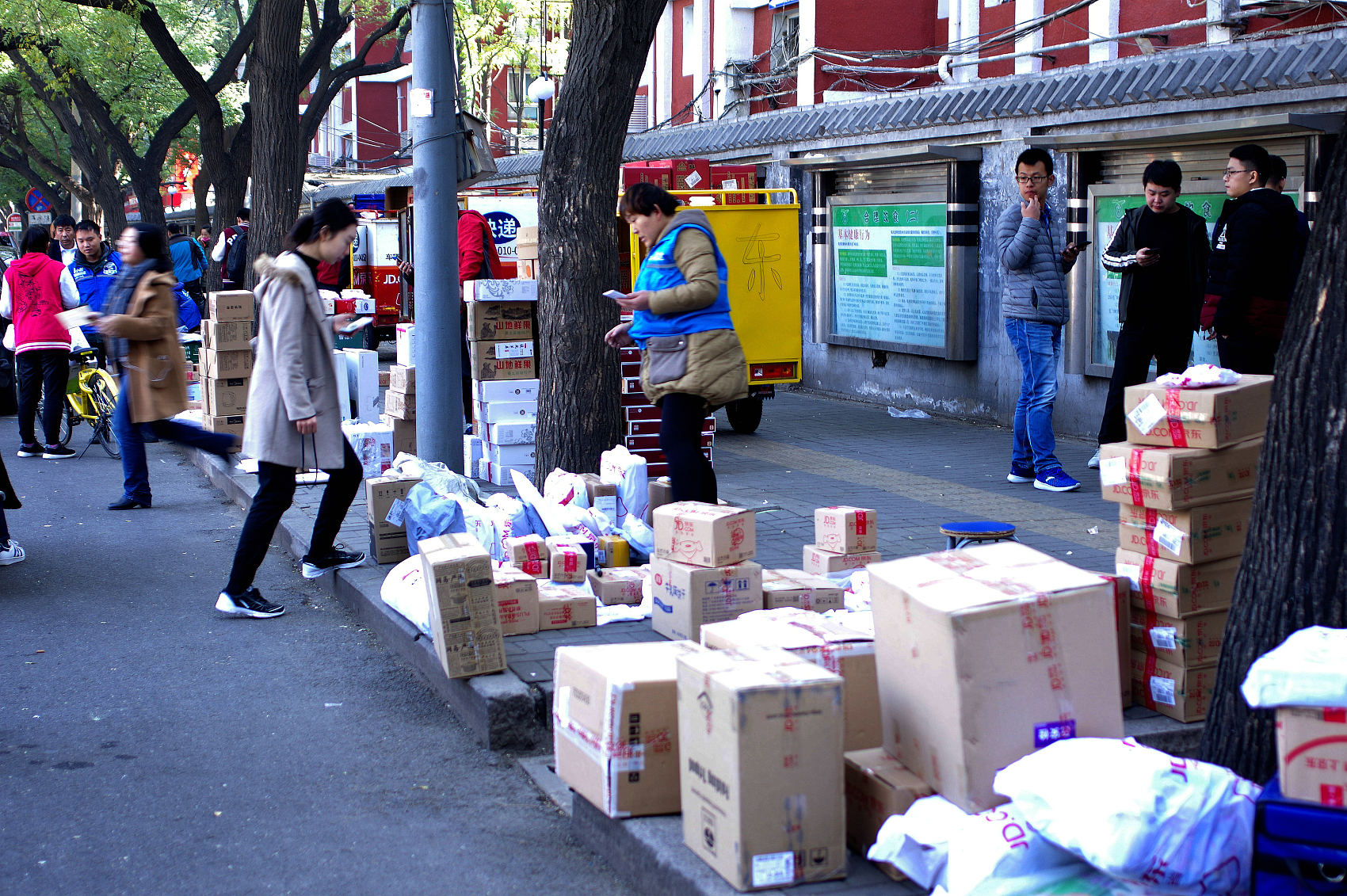 A great number of online orders were delivered to the south entrance of Peking University in Beijing, on November 3, 2017. Photo: VCG

While online marketplaces in China are busy preparing for an upcoming shopping bonanza with promises of faster delivery to woo buyers, the government has started working on addressing the "aftermath" of online sales -- hundreds of millions of tonnes of packaging waste generated across the country each year.
The State Post Bureau (SPB) announced specific goals to green the courier sector on November 2, 2017.
By 2020, half of external packages should be degradable, 90 percent of waybills electronic, and packing material consumed for each parcel cut by 10 percent, the SPB said in a document. Tape and woven bags should be gradually replaced.
"Given the rapidly-growing express delivery industry, the impacts of packaging waste on the environment can not be ignored," the SPB said, noting a courier package regulation system will be built.
The move came amid looming Singles' Day sales, seen by many as China's version of Black Friday. Falling on Nov. 11, the newly-created online shopping festival was popularized by Alibaba, the world's largest retail platform.
The SPB predicted the shopping spree will boost the number of packages handled between Nov. 11 and 16 to 1.5 billion, up 35 percent from the same period a year ago. The daily volume could hit 340 million, three times the usual level.
Despite measures from hiring more couriers to deploying smart warehouses, courier service providers still face the challenge of ensuring on-time delivery. However, what the environment is confronted with is much more serious.
Packages mainly made of paper and plastics have resulted in more consumption of wood and crude oil, according to Yang Jun, deputy secretary general of the China Express Association.
Producing a tonne of paper boxes takes 17 ten-year-old trees, and three tonnes of oil is required for a tonne of plastic bags, data showed.
The recycling of packaging waste is another problem. "Currently, there are no effective systems for garbage sorting and recycling," said Zeng Xianlai from Tsinghua University.
Packaging materials such as tape, cushions and plastic bags are usually sent to landfills, and the main component of such materials, polyvinyl chloride, may take hundreds of years to degrade. Burning these materials also generates pollutants.
Analysts estimated China saw six million tonnes of packaging waste generated last year and the disposal costs will be more than 9 billion yuan (around 136 billion U.S. dollars).
Less than 10 percent of packaging materials are recycled, Zeng said.
"China should speed up green transformation in courier sector," Yang said, adding that all express delivery companies, online stores and consumers should be involved.
Major e-commerce businesses have moved to ease the environmental concerns.
Suning.com's president Hou Enlong said the online platform will use plastic express boxes that can be folded and recycled to replace cardboard ones. The company first tried non-folding boxes half a year ago and 6.5 million cardboard boxes have been saved since then. Hou plans to increase the total number of boxes to 200,000 from the current 50,000 for the delivery of consumer electronics, mother and baby products, and fast-moving consumer goods in 2018.
JD.com and Alibaba's delivery unit Cainiao.com have also carried out similar programs that feature biodegradable materials and less packaging.
But inconvenience in delivery and recycling have to some extent curbed the promotion of a more eco-friendly packaging system and sometimes disposable packaging appears to be much more favored by consumers, such as when purchasing fresh products.
Cainiao.com's vice president Shi Miao said online stores could give extra membership points to motivate consumers to choose green packaging.
"In our public welfare program, our clients can exchange their points for planting a tree in northwest China's deserts," he said.
Thanks to the motivation, Cainiao.com's green packages have been used 5 million times this year, Shi said.
Analysts said steering towards green packaging is the long-term trend for the courier sector although it still needs time to achieve a complete transformation.