Improving productivity, instead of the Brexit issue, is the primary task facing the British economy at the moment, said renowned British economist Jim O’Neill. “The UK being in or out of the EU (European Union) is not the most important thing facing our economic future, and I strongly believe that,” O’Neill, chairman of Chatham House think tank in London, said at an exclusive interview recently. 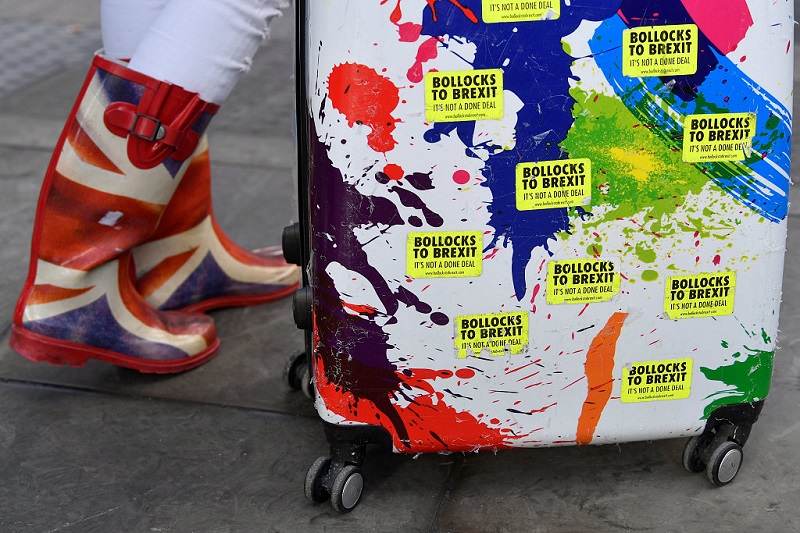 Anti-Brexit stickers are seen on a woman's suitcase in a street in London, Britain January 30, 2019. (File photos: VCG)

He also serves as the chief economist at Goldman Sachs and coined the acronym BRIC nations in the early 2000s to capture the idea of the future strength and potential for the world economy offered by the developing economies of Brazil, Russia, India and China.

Britain faces a March 29 deadline to leave the 28-nation bloc under the formal EU exit process of Article 50.

Meanwhile, the deadline is drawing closer and Britain faces the prospect of crashing out of the bloc without a deal.

But for O’Neill, Brexit is very much a short-term problem and he has a longer vision when he looks at economic issues. “Doing something about our productivity performance and our geographic inequality and our inter-generational inequality, these things are way more important (than Brexit),” O’Neill said.

Britain has suffered a slump in its productivity growth since the financial crisis, and at times the improvements in figures seen in one half of a year are wiped out in the next quarter.

Britain’s slowdown has been more dramatic than that of any major Western economy, with annual growth in productivity falling from an average annual rate of about 2.3 percent before the financial crisis to 0.4 percent in the past decade.

The average British worker produced 16 percent less on average than counterparts in other members of the Group of Seven leading economies in 2016, according to data from the British official statistics body, the Office for National Statistics.

“So, even a hard Brexit, which would be very bad at first, isn’t as important as those things. The contradictory part is — why the hell would we deliberately make our productivity challenge even worse by choosing to have no trade arrangements with the single biggest economic trading zone in the world?” O’Neill said.

O’Neill cited his own industry of finance and the successful industry of auto assembly as areas where the economy could suffer after Brexit because there could be greater friction and costs to both trade and imports, which would eat into businesses’ profit margins.

In 2017, the British auto industry built 1.3 million cars for export, accounting for 12.8 percent of total British exports, according to motor industry statistics.

“The auto industry, which in modern Britain is arguably the most successful of any traditional industry, produces more cars today than 40 years ago — it would be decimated under World Trade Organization rules,” O’Neill said.

“Some of the world’s most productive auto plants are in the UK, and if we go out under WTO rules they won’t stay that way because the profit margins are too thin — I’m sure there are many other industries where that’s true.”

“My old industry of finance would have some interesting challenges,” O’Neill added, and challenged the idea that Britain could leave the EU with a managed no-deal.

O’Neill had served in the British government for several years after he left banking as treasury minister in the coalition government of David Cameron.

“There are a lot of people in the Western world who don’t believe, because of the circumstances they’ve lived in, that the past 30 years have helped them at all,” O’Neill said.

“When our Chancellor of the Exchequer often says ‘we didn’t vote to make ourselves poorer,’ actually a lot of people that are poor in the UK might have voted to make themselves poorer, because they want to shake up the system.”

“They don’t really understand the degree of sacrifice they might make, but they don’t mind sacrificing growth in the UK, because they’ve not benefited from (it) anyhow,” he added.

“There’s a commonality with this (thinking) in the US, there’s some commonality of it in many parts of Europe, and it is clear that — as fantastic as globalization has been for China and for many other places, and for the elite world that I’ve lived through — there’s a lot of lower-income, working people that have not benefited much from the past 30 years, and it’s easy to blame globalization.”

Cover image: British and EU flags flutter outside the Houses of Parliament in London, Britain January 30, 2019.