OPINIONS Efforts to eliminate extremism should be lauded

Efforts to eliminate extremism should be lauded 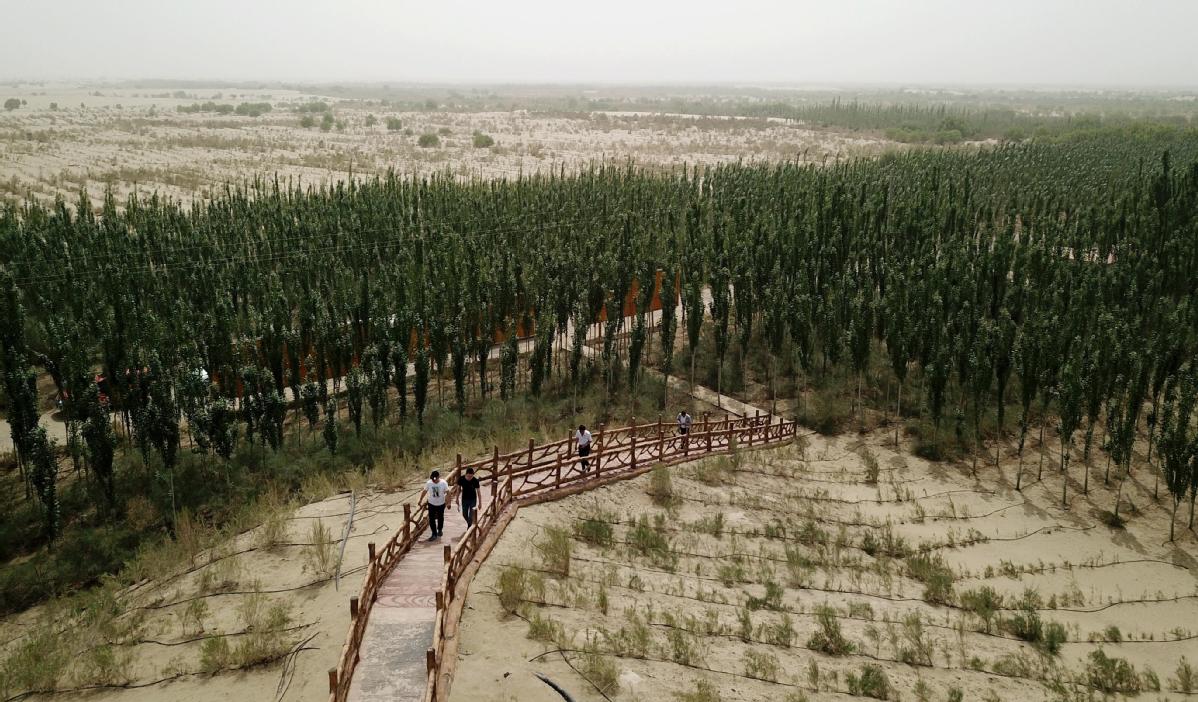 People walk across a bridge in the man-made woods in Makit county, Kashgar, Xinjiang Uygur autonomous region. In 2012, the local government launched a project to convert about 66,000 hectares of desert on the county outskirts into woods. (Photo: China Daily)

Extremism that fosters terrorism breeds and infests under certain conditions. So to suppress terrorism, we also need to eliminate the conditions conducive to the spread of extremist ideology, which calls for long-term, arduous, all-around efforts.

Both resolution 72/246 and resolution 37/27, adopted by the United Nations General Assembly in 2015 and 2018 respectively, noted that there are a number of drivers underlying radicalization to terrorism and conditions conducive to the spread of terrorism. Also the UN's Plan of Action to Prevent Violent Extremism pointed out that prevention should be made an integral part of a comprehensive approach to tackle many of the underlying conditions that drive individuals to join violent extremist groups. Albeit that will require long-term and patient engagement and results may not be immediately visible. To counter terrorism and extremism in the Xinjiang Uygur autonomous region, the Chinese government has paid equal attention to preemptive and counter-measures, with the preemptive measures aimed at eliminating the driving factors and conditions conducive to nurturing terrorism and violent extremism.

First of all, China has proactively acted to eliminate poverty and improve people's livelihoods so as to wipe out the soil fomenting violent extremism. An integrated subsistence allowance system covering urban and rural areas has been established and improved with transfer payments from the Chinese central government. Job opportunities have increased with assistance from partner cities and policies to encourage employment. Old buildings have been renovated and living conditions improved through a renovation program subsidized by the government. In addition, local leading cadres have partnered with distressed households in rural areas to offer one-to-one assistance so the households can cast off poverty.

About 75,000 people in southern Xinjiang found employment in other areas since 2018. While 1.4 million new jobs were added across Xinjiang and rural surplus labor was employed 8.3 million person-times elsewhere from 2016 to 2018. Xinjiang recorded unemployment rate of 3.3 percent in urban area and per capita disposable income of urban residents increased about 6.5 percent in 2018; 470,900 houses in shanty town areas were renovated and 282,000 houses built with government subsidies in rural areas; 537,000 people cast off poverty and the incidence of poverty dropped to 6.51 percent in 2018. There is not a single zero-employment family in Xinjiang and poverty is expected to be eliminated in Xinjiang by 2020.

Second, inclusive social policies have been implemented and the education, healthcare and social security systems improved to curb the influence of religious extremism in education, marriage, healthcare and gender equality. Students in southern Xinjiang enjoy 15 years of free education from kindergarten to high school. Hospitals have been refined with support from advanced counterparts inside and outside Xinjiang. Free health checkups have been extended to all individuals in Xinjiang and the critical illness insurance program now covers all Xinjiang's residents. All poor people in rural areas sick with 15 major diseases and other chronic diseases can receive facilitated treatment.

Third, anti-extremism education is being vigorously conducted. People are encouraged to learn the Chinese language and laws and improve vocational skills through night schools, the organizations they work for or vocational skills training centers. After years of efforts, people in Xinjiang have an increasingly deep understanding of the harm caused by extremism and most trainees at the training centers have graduated and got a job.

Fourth, the rule of law has been strengthened and the Regulations of the Xinjiang Uygur Autonomous Region on Deradicalization have been introduced which while upholding freedom of religious belief in Xinjiang, forbids the use of religion to disrupt social order, harm citizen's health, hamper national education activities and interfere with the implementation of State functions including its administrative, judicial and educational functions, as well as social affairs such as marriage. No one should be forced to believe in any religion and religious activities are forbidden in unreligious public places such as schools. All content containing violent extremism is banned. Also the concept of halal should never be extended to areas except food. And no one should interfere with another's civil life in the name of halal.

All these measures have effectively contained the spread of violent extremism in Xinjiang. Xinjiang has seen no terrorist cases in more than 30 months. And 150 million trips were made to Xinjiang in 2018, a growth rate of more than 40 percent on the year before. The region recorded a GDP of 1.2 trillion yuan ($170.67 billion), growing 6.1 percent year-on-year. As such, other regions with similar conditions could draw some lessons from Xinjiang's fight against terrorism and violent extremism.

The author is director of the Research Center for Human Rights and a professor at the Zhou Enlai School of Government, Nankai University. The views don't necessarily represent those of China Daily.