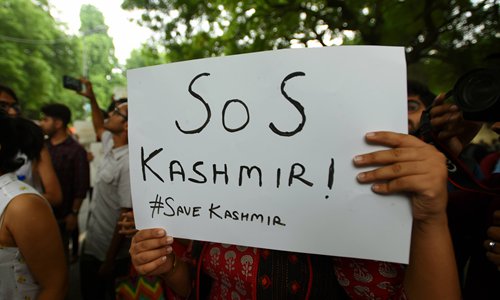 Indian protesters go against the proposed bifurcation of the state of Jammu and Kashmir on August 5 in New Delhi, India. (Photo: IC)

In 2019, there were major changes in the traditional and non-traditional security situation of South Asia.

First, tensions between India and Pakistan over Kashmir continued and the possibility of an armed clash remained quite high. In February 2019, following a terror attack on Indian security forces in Pulwama, the Indian Air Force conducted surgical strikes across the border with Pakistan.

For political reasons, India is likely to resort to air strikes in similar situations in the future, or it might adopt even more lethal measures. Attacks like Pulwama and the following air strikes by India could easily trigger misunderstanding and even a military conflict.

In August 2019, India unilaterally revoked the special status of Jammu and Kashmir, making Jammu and Ladakh two separate union territories. Thus, the possibility of India's further infiltration into Gilgit-Baltistan and Pakistan-controlled Kashmir cannot be ruled out. This move by India violated the United Nations Security Council Resolution 47 and the Simla Agreement signed by India and Pakistan and worsened bilateral relations.

After India's revocation of Article 370 of its constitution that grants special status to Jammu and Kashmir, Pakistan did not react much. However, its patience could be limited. Especially after India recently passed its Citizenship Amendment Bill, which is largely seen to be anti-Muslim, conflict between the two countries may be imminent.

Besides, the geostrategic confrontations in South Asia and the Indian Ocean region are intensifying, which can be reflected in US Indo-Pacific Strategy and the Quadrilateral Security Dialogue among Australia, India, Japan and the US (the Quad). Not only have the quadrilateral and trilateral cooperation levels been upgraded, but the mechanism of 2+2 foreign and defense ministerial meeting between India and Japan has also been established. India even set up a new Indo-Pacific division in the foreign office. Although India claimed that its Indo-Pacific vision is different from the US Indo-Pacific Strategy, they are essentially the same.

In early December 2019, a Chinese research vessel was expelled by India near Andaman. Also, India has harmed China's interest by unilaterally changing the status of Kashmir, as it has gradually acquired a more aggressive posture toward its border issues with China as well. For example, it provoked a confrontation with Chinese military near Pangong Lake.

Since President Xi Jinping had two unofficial meetings with Indian Prime Minister Narendra Modi in April 2018 and in October 2019 respectively, China-India relations are still under control. However, there is a possibility of future confrontations near the border or in the Indian Ocean.

The situation in Afghanistan is deteriorating. The US is considering its troops withdrawal from Afghanistan. Right now, the Trump administration is busy negotiating with the Taliban. In such a situation, terrorism has been surging. The Islamic State is now aiming to establish a presence in the area.

In April 2019, a mass terror attack took place in Sri Lanka, causing heavy casualties. Also in November 2018, the Chinese consulate in Karachi was attacked by terrorists. The Balochistan Liberation Army, supported by some countries, targeted Chinese people and China's projects in Pakistan.

Overall, the security situation in South Asia is getting worse, which does not bode well for the region's economic development.

There are mainly three possible solutions to improve the situation. First, since every country is the victim of terrorism, international cooperation needs to be strengthened. Currently, most counter-terrorism cooperation is bilateral. Without cross-border systems and platforms, even the UN and the Shanghai Cooperation Organization (SCO) cannot effectively deal with such issues. One of the problems the SCO faces is that India and Pakistan will hardly reach consensus in certain aspects after they joined in. Thus, new ideas and experiments are needed, especially in regard to the Afghan peace process.

Second, it is urgent to set up a democratic, egalitarian and inclusive regional security architecture to deal with geopolitical issues. The US, Japan, Australia and India intend to form their military alliance, which excludes China and Russia. But the future security architecture in this region should be equal and inclusive, including all the countries involved, such as China, Russia and ASEAN member states.

Third, major forces in relevant areas ought to take responsibility to maintain regional security and stability. Political agendas which can trigger cultural and religious conflicts should not be implemented. Many policies adopted by some dominant forces within and outside the region are mostly based on their long-term strategic opportunistic calculations, and are not immediate responses to the situation. Such countries should have a clear understanding of the situation and respond to it collectively.