Basma Mostafa, from Egypt, has decided to stay in Beijing during the novel coronavirus outbreak, despite her father's pleas for her to return to their home in Nasr City, a district of Cairo.

"How can I save you?" her father asked on the phone as he read the news, especially the cessation of EgyptAir flights to China on Feb 4.

"What made him most anxious were the rumors he heard, such as people falling down dead in the street and the shortage of daily necessities in supermarkets," Mostafa, a PhD candidate at Beijing Language and Culture University, said.

The 30-year-old added that the real situation in Beijing, and even in Wuhan, Hubei province－the epicenter of the outbreak－is less serious than the impression her family had gleaned from new media platforms and video blogs on sites such as YouTube.

Although she felt anxious about the virus and the number of people becoming infected, Mostafa knows a lot more than her friends and family outside China because she is experiencing the epidemic in person and watching the local news.

"I know things here, and more importantly, I see all the people in the nation making efforts to contain the spread of contagion. I have to stand up and tell the truth to more people about what's really going on in China, if only to ease the concerns of my family and friends," she said.

In a long Facebook post written in Arabic on Jan 31, she gave a number of reasons for staying in China. The post was reported by Gulf Today, an English-language newspaper in the United Arab Emirates.

"I have no idea who I will encounter during the journey back to Egypt, which includes a taxi to the airport and an 11-hour flight. Also, I cannot guarantee that I won't become infected, and I am concerned about my relatives and others who may become infected because of me," Mostafa wrote, adding that she believes staying in Beijing is the safest option.

She listed some measures the government has taken to combat the virus, such as putting Wuhan under lockdown and rapidly erecting makeshift hospitals to treat the infected.

"I can only enter and exit my campus and community by showing my identity card," she said, describing the measures taken in cities such as Beijing, Shanghai and Guangzhou, Guangdong province.

"China has history of dealing with viruses, such as SARS (severe acute respiratory syndrome) in 2003. I am fully confident that it will deal with this crisis. On the other hand, Egypt lacks experience of battling viruses, so I won't risk the possibility of bringing back the virus to my family and my country," she said.

Having lived in China for eight years, she has a sense of belonging and she wants to fight the disease alongside the Chinese people.

To explain the decision in her mother tongue, she made a short video while standing outside and wearing a mask. It has garnered nearly 7 million views on Facebook.

She never thought her posts would trend on Facebook and attract the attention of the mass media in the Arab world.

"I got the chance to tell my story to the Arab media. They gained a more accurate picture of China through the voices of me and my foreign friends," she said.

Many of her compatriots have chosen to stay in China. Not just because they trust the country's ability to deal with the epidemic, but also for the dreams they are pursuing.

Even when the Egyptian government chartered a plane to bring its citizens home from Wuhan, one PhD candidate in the city refused to leave for fear of failing to graduate in May, thereby undermining the efforts he has made over several years.

"His story touched me. The epidemic is not an excuse to suspend life. On the contrary, it should be our motivation to make progress," Mostafa said. 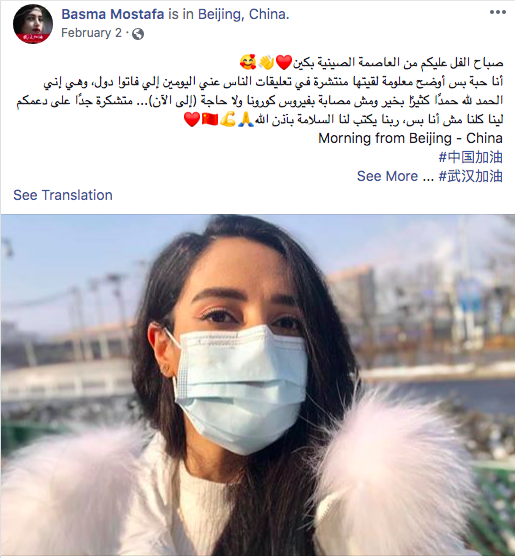