OPINIONS Eight 'No.1' titles the US deserves

Eight 'No.1' titles the US deserves

The final day of the Tokyo Olympic Games saw the US secure three gold medals. With this, it passed China to come to the top of the medal table. 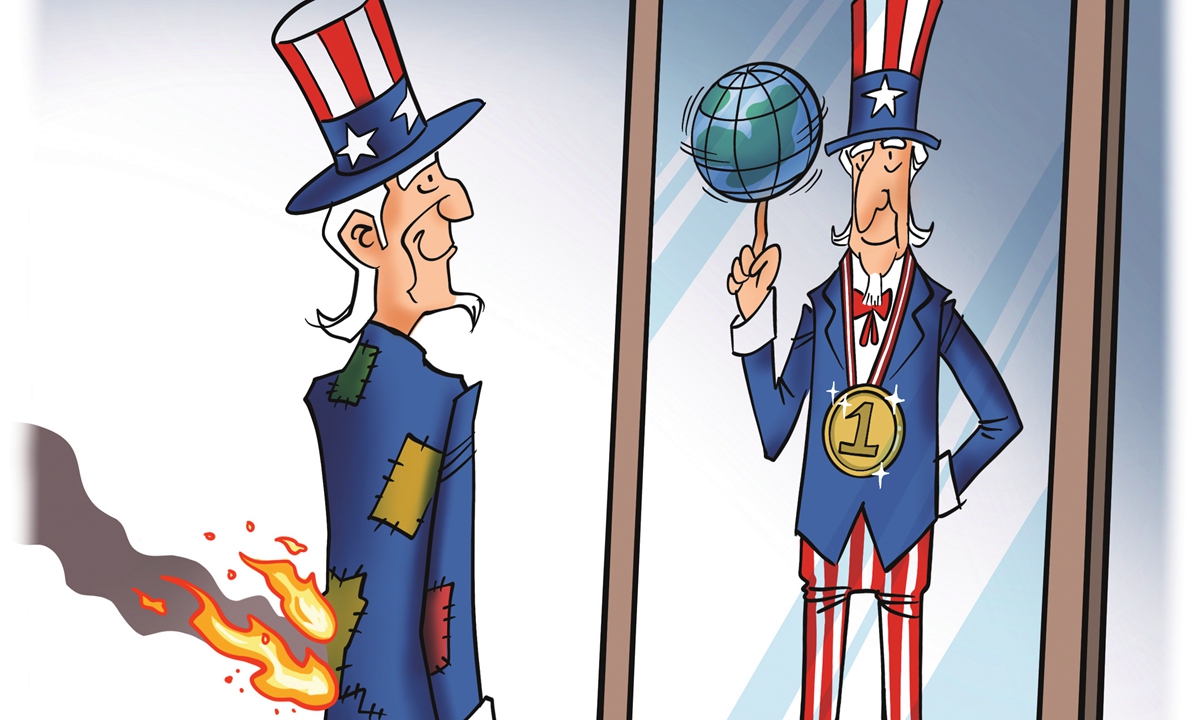 I can sense how much the US media were waiting to see whether Team USA could top Final Medal Account. When China was leading the medal table with the most gold medals, US media outlets tended to count total medals to place America at "No.1."

I just want to say, the fact that the US has won the most gold medals is acceptable to most Chinese. It is an anticipated result. For Chinese, it would have been very abnormal if America failed to top the gold medal tally.

As a matter of fact, many Americans are more concerned with the "No.1 position" than their Chinese counterparts. This is also an important psychological reason why the US in recent years has continuously suppressed China's rise with the fear of being surpassed by China.

The US now ranks first in the world in terms of GDP, military expenditure and financial strength. No powers can shake the US "No.1 position" in the near future. The loss of this top position is more likely to be caused by the US' own mistakes. For instance, the US has the highest percentage of GDP spent on healthcare, and it is supposed to have the best anti-pandemic performance of the world. Regrettably, the US is witnessing the highest levels of COVID-19 infections and death tolls -far ahead of other countries and regions. What's more ridiculous is this: Some US media outlets have racked their brains to make the US "No.1" in anti-pandemic ranking.

Such obsession with "No.1" goes against facts and human ethics. If the US really cares about the "No.1" position, I suggest it mind more about the following eight "No.1" titles it deserves.

The world's No.1 failed country in the COVID-19 fight. Over one and a half years, more than 35.8 million people have been infected and more than 617,000 have died from the virus in the US. As American physician and epidemiologist William Foege said in October 2020, "It is a slaughter." Indeed, the COVID-19 death toll in the US is higher than the sum of all soldiers died in the WWI, the WWII, the Korean War, the Vietnam War and the Iraq War.

The world's No.1 country that passes the political buck to others. Former US president Donald Trump once passed the buck to the Democratic Party, while President Joe Biden has now blamed the Republican Party for the US' anti-epidemic failure. The US government has also passed the blame to the WHO, China, the COVID-19 vaccine, and even top US scientist Dr Anthony Fauci. Even with so many deaths, no US politician has ever stood up to apologize. no US politician has resigned. No one will hold themselves accountable.

The world's No.1 country in spreading the COVID-19. Since April 2020 to March 2021, the US government did not take any effective exit control measures and a total of some 23 million people went abroad. The US has an inescapable responsibility for the global spread of the pandemic.

The world's No.1 politically divided country. In fact, bipartisan disputes have been everywhere on almost all anti-epidemic issues among the US departments and media: nucleic acid testing, wearing facial masks, social distancing, home quarantine, vaccination, medical strategic reserve allocation, and emergency relief fund and so on.

The world's No.1 country in terms of over-issuing currency. Since the COVID-19 outbreak, the US has chosen to save the stock market instead of people's lives. The US Federal Reserve has adopted unconventional monetary measures.

The world's No.1 turbulent country during the COVID-19 pandemic. The epidemic has intensified racial tensions in the US, and George Floyd's death is just the tip of the iceberg: Discrimination and hate crimes against black, Asian, and Latin American people have significantly increased; Gun sales in the country jumped 64 percent in 2020; Mass shootings have taken place more often. In 2021, there was even a riot and violent attack against the Capitol. This is very rare in US history since the founding of the country.

The world's No.1 country in spreading disinformation. What's really going on with the Fort Detrick closure? What are the real results of the vaping-related lung disease? Can the more than 200 US military biological laboratories located around the world be subject to international investigations? The US government has never faced up and responded to these questions. Instead, Donald Trump's tweets had become the biggest source of disinformation about the COVID-19.

The world's No.1 country in practicing "origins-tracing terrorism." Biden has requested US intelligence agencies to take charge of the investigation of the novel coronavirus origins. Meanwhile, US Secretary of State Antony Blinken and National Security Advisor Jake Sullivan have made a series of irresponsible statements on the virus origins tracing. All of these have created international strife for no reason. They have worsened the already deteriorating China-US relations and fueled the strategic competition between the two countries. This has also harmed the global fight against the pandemic.

"Crowning" the US with these "No.1" titles is in no way intended to start a war of words with the US media. It is rather a reminder to Washington of their responsibilities. If the US really wants to be a real "No.1" in the world and remain a respectable country, then self-reflection, national unity, and international cooperation are the true paths to the top championship spot.