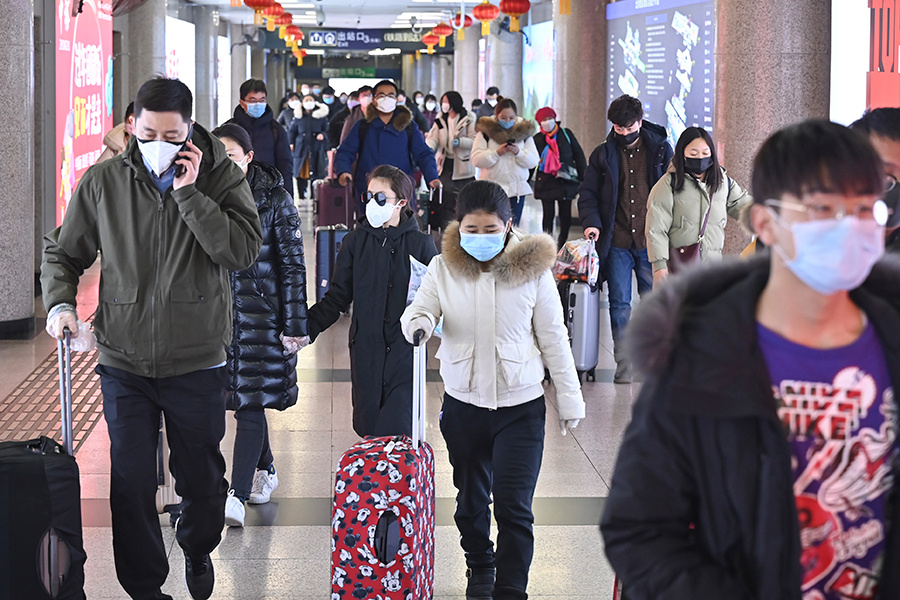 Travelers are equipped with face masks as they exit the Beijing West Railway Station on Jan 30, 2020. (Photo: China News Service）

It is still too early to say what impact the spread of the novel coronavirus will have on the internet in China, but the way the internet is being used in the fight against the epidemic shows information technology has transformed into digital technology and the traditional internet is now smart internet.

Proper dissemination of information about the virus is likely to accelerate commercialized use of 5G technology.

5G's application is already becoming increasingly clear with the rise in demand for telemedicine, remote education and, following the outbreak of the infection, remote offices.

The fight against the virus has given digital technology greater room for use as a "new weapon".Increased penetration of 5G will also help popularize technologies such as video social networking and the video office.

One can also expect greater use of artificial intelligence, blockchain, cloud computing, big data, edge computing and the internet of things.

The epidemic has forced many Chinese people to stay indoors to safeguard themselves against the virus. But their work cannot stop. Thus, Tencent and other internet enterprises have developed new applications and software to help people work from home.

After the epidemic ends, such remote collaborative office software is going to usher in a new development opportunity. The forced confinement is also leading to a drastic rise in the number of new internet users, as networked videos give bored residents constant company.

Such videos also help in the release of information and popularization of medical knowledge. The outbreak is thus helping increase health awareness and increase the application of networked health and medical systems.

Networked video is definitely going to see a golden age of development once this epidemic ends.

China's internet penetration, at 61.2 percent, is likely to approach the 80 percent seen in the United States, Japan, the Republic of Korea and some European countries.