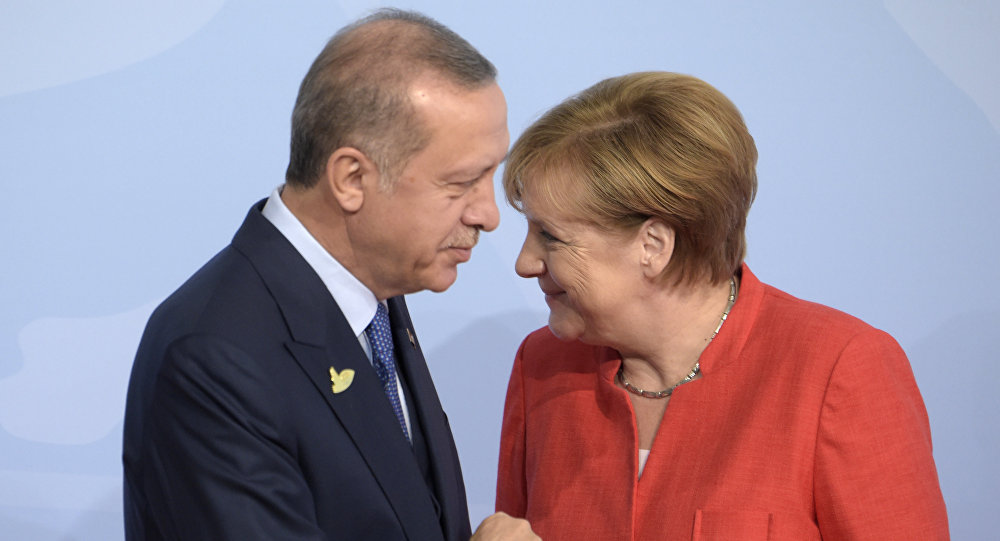 Erdogan said the German leaders have always supported integration and will continue to do. He called for better integration for the Turkish living in Germany.

Due to coverage from German media, about 2,000 gathered at the mosque during the opening ceremony. The crowd was filled with both Erdogan supporters and opposition.

It was reported that thousands of police officers were on the streets and snipers were stationed on roof buildings throughout the area.

Analysts have said Erdogan is dividing the Turkish community, and in Germany he is a controversial figure.

Many German politicians have chosen not to attend the state banquet for the Turkish president in Berlin.

And the relationship between Turkey and Germany has been up and down in the past years. According to German newspaper Der Speigel, the visit is a chance to warm bilateral relations.

Erdogan has led Turkey away from Europe in recent years. He has referred to the Germans as "Nazis" and "terrorists.”

Under pressure from US President Donald Trump’s trade protectionism policies, the Turkish economy has rapidly declined. Right now, Turkey could use a friend like Germany.

Germany's most powerful lever over Ankara is its economy and the Federal government will probably not send the funds that Erdogan wants.

German Vice Chancellor Olaf Scholz has made it clear that aid would flow exclusively through the International Monetary Fund (IMF).

For Erdogan, symbolic support from Germany is important. When Merkel highlighted the importance of Turkey as an economic partner in August, this statement alone calmed the marketplace.

Erdogan wants the customs union between Turkey and the EU to expand. Turkey supplies half of its exports to EU countries. If trade barriers were removed, Turkish companies would stand to make billions.

On the other hand, Germany, and even the EU, need Turkey’s support with the refugee crisis and on anti-terrorism issues.

The German government has already proven it can communicate with Erdogan when conditions permit.

Turkey turns to Europe, and then to Germany because there are no alternatives. According to Germany-Turkey expert with the Heinrich Böll Foundation, Kristian Brakel, “There is no great love. There is no great conviction behind it, even if some politicians may be a little different here, but it is a purely strategic question.”

The EU-Turkey migration deal reduced the number of refugees entering EU nations. But Germany and Turkey must take more responsibility to ensure refugee protection. Meanwhile, both nations have similar interests in Syria. Only the wars and conflicts in Syria and the Middle East can solve the refugee crisis.