OPINIONS Err on the safe side to end public nuisance

Err on the safe side to end public nuisance 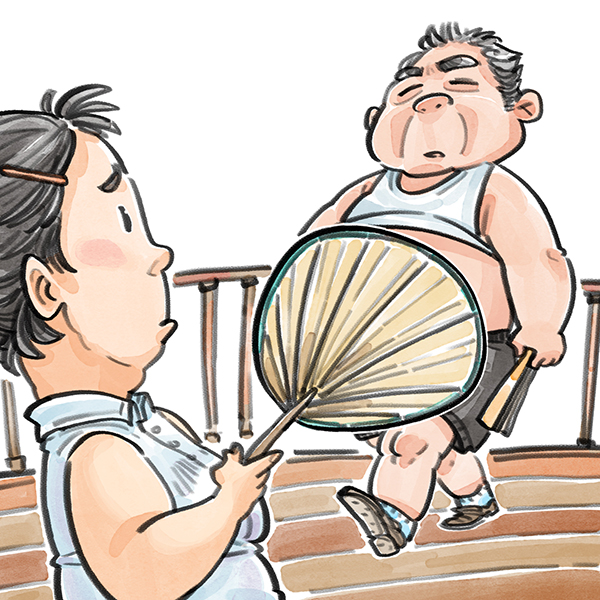 Multiple local governments including those of Handan in Hebei province, Jinan in Shandong province, and Tianjin have banned the so-called Beijing Bikini－which refers to men who roll up their shirts or T-shirts to expose their bellies in public places in summer. Aimed at promoting civilized behavior, the ban is a timely move as the "Beijing Bikini" is considered offensive, especially by women.

Yet the good intentions of the local governments constitute only the first step toward promoting civilized behavior, particularly in public places. So the authorities should consider all possible options and devise an appropriate plan to ensure the ban on Beijing Bikini is actually implemented.

In this regard, Handan's move offers some food for thought, as civic inspectors in Hanshan district gift a T-shirt to men in Beijing Bikini to cover themselves up. This method of correcting uncivilized behavior in a civilized way reflects proper social management and sends a goodwill signal to the people in general.

However, it is necessary to make certain facts clear, and adopt the most appropriate methods to deal with the issue. For instance, men in Beijing Bikini cannot be held guilty of committing an offense. At most, their behavior may be deemed uncivilized. In sociological terms, the act of a man wearing nothing above the waist could be defined as minor transgression.

Thus those flashing their bellies in public places should not be fined, publicly shamed, or reported to their employers. Nor should the public security department, which targets criminals and people who break rules and seriously violate social moral codes, be employed to deal with people who expose their bellies in public, because such people's right to personal liberty is protected by the Constitution and other laws.

Besides, punishing those who transgress or deviate from established social norms using formal institutionalized rules would mean separating them from other people, which could turn them into habitual wrongdoers. Also, meting out harsh punishments to people who roll up their T-shirts to expose their bellies would not be in conformity with the law.

Second, people indulging in uncivil behavior should feel they are being asked to change their habits for their own good and to ensure they don't become an object of public ridicule.

And third, public discussions and negotiations should be conducted to search for the most appropriate method to deal with the public nuisance, as men in Beijing Bikini are definitely not an attractive sight. Therefore, it is better to start a long-term education and guidance campaign to increase people's awareness about the difference between civilized and uncivilized behavior. Only in this way can people be convinced to not roll up their T-shirts in public and bare their bellies.

There are a lot of other important issues that deserve much more attention of the government than the Beijing Bikini. So it is rather important for officials to use practical means to encourage people to behave properly in public. In this way, they can help improve governance and build a comprehensive and effective governance system. Which is of much greater importance to the country.

The author is a professor at and vice-dean of the School of Politics and Laws, University of Chinese Academy of Social Sciences. The views don't necessarily reflect those of China Daily.