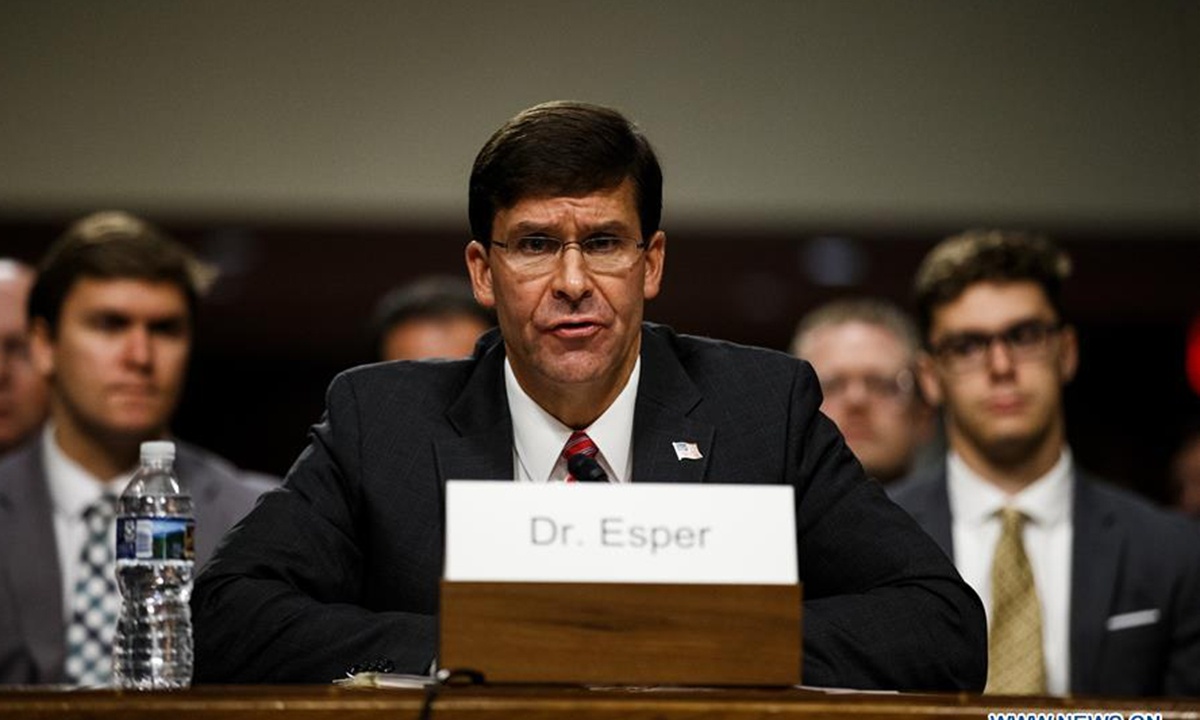 US President Donald Trump’s dismissal of Defense Secretary Mark Esper is not merely an abrupt personnel change before his presidential term expires, but signals turbulent US political changes in the 70 days after the presidential election, with a possibility of waves of dismissals and resignations, Chinese analysts said.

In a tweet on Monday, US President Donald Trump announced Esper’s dismissal, saying that he will be replaced by Christopher C. Miller, the director of the National Counterterrorism Center.

With Trump still refusing to concede the election, the move has drawn great attention.

CNN said Esper’s firing marks “the first move in what could well be the wildest and most unbound 72 days in modern American political history.” Reuters, quoting Democrats, said, “Trump’s move sent a dangerous message to America’s adversaries and dimmed hopes for an orderly transition as President-elect Joe Biden prepares to take office.”

Li Haidong, a professor at the Institute of International Relations of the China Foreign Affairs University, told the Global Times that the removal of the Secretary of Defense raises concerns over whether Trump will use the military to ensure that he remains in the White House or consider overturning an election result that he sees as unfair.

By firing the Secretary of Defense before the expiry of his term, Trump is showing to the outside world that he has the real power, even after the frustrating election results, Li said.

“We cannot rule out the possibility that in his remaining 70 days Trump will forcefully and rudely refuse to leave the White House,” Li said, noting that if Trump really did have this idea, it would be very naive and would seriously depart from and undermine the political and legal system of the US.

While his opponent Joe Biden has declared victory, Trump has yet to concede the election. His personal attorney Rudy Giuliani boasted Trump still has a chance in the race, as he could bring as many as 10 last-ditch lawsuits alleging election fraud, US media reported.

Ever since Esper opposed using the military to crack down on violent protests in the US after the death of George Floyd in May, he has been on Trump’s dislike list, media reports said.

Although news had already circulated that Trump was going to fire Esper two weeks before the election, it has become a reality today, showing that Trump attributed part of his election failure to Esper, blaming him for not using federal military power to suppress ethnic riots as Trump had wished and further causing him to lose votes in some electoral districts, observers said.

Esper’s termination may be just the start of more sackings of senior US officials. FBI Director Christopher Wray and CIA chief Gina Haspel could be the next targets, according to the CNN report.

However, there is a greater probability that there will be a wave of resignations in the US government following Trump’s defeat, Li told the Global Times, noting these people working in the Trump administration are members of the “deep state” and they have held these positions to make sure Trump’s policies do not go against “deep state’s” interests during his presidency.

Prior to the US presidential election, China and the US held the first crisis communication working group meeting dedicated to establishing a mechanism on crisis communication and prevention. When the US media alleged that the US military could attack islands and reefs in the South China Sea, Esper made a point to dismiss these untrue reports and clarified his stance to China through military and diplomatic channels.

Asked whether Esper’s dismissal will affect the easing of tensions between the militaries of China and the US, a military expert who requested anonymity told the Global Times that replacing the defense secretary will naturally bring about a replacement of US basic policy.

The probability of an incident occurring between China and the US is low, but China should pay close attention to any abnormal movements in the South China Sea and the Taiwan Straits, the expert said, noting that it cannot be ruled out that Trump will make trouble with China and leave Biden with a mess to deal with.