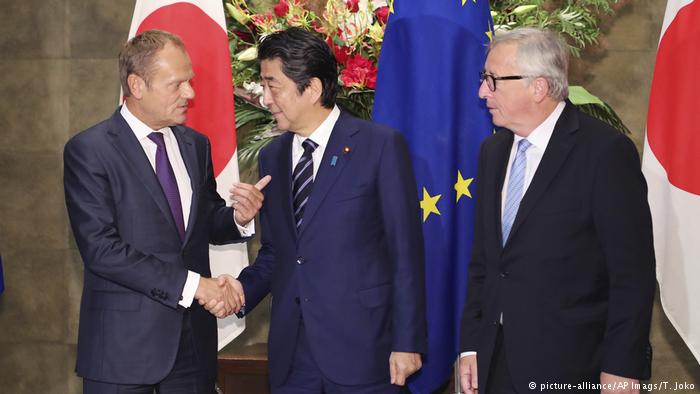 The EU and Japan signed the Economic Partnership Agreement (EPA) on Tuesday, which will eliminate tariffs on 99 percent of their goods after taking effect. It has attracted wide attention as the US government launches a trade war against nearly the whole world. Tokyo and Brussels have been negotiating the EPA for five years, but its signing is interpreted by many as a move to pressure the US.

Signing the EPA allows Japan and the EU to gain more confidence in face of the trade war by the Trump administration and should prompt Americans to wonder: Will the trade war isolate Washington?

A trade war is used to pursue self-interest through coercing and exhausting others. It is undoubtedly not very efficient compared with cooperation and consultation. The trade war at present is small in scope, but it demonstrates a mindset that runs counter to globalization. The world must choose between globalization and protectionism.

As the staunchest ally of the US, Japan has made a low-key response to Trump's tariff threats. But its persistence in the Trans-Pacific Partnership and the EPA clearly indicates that Japan will protect its trade interests and won't trample on the multilateral trade system as Washington has been doing.

The EPA suggests that free trade will go forward even without US participation. It may slow down, but won't step back in an earth-shaking manner. If the US deems the trade war as its primary way of communicating, it will unavoidably isolate itself.

The rest of the world didn't intend to unite against the US. But Washington put itself in an adversarial position to all others so that any of their moves would look like they are working together against the US.

Japan and the EU are seemingly engaged in a silent anti-US demonstration by enhancing bilateral free trade. And more such cases will arise.

The economies of the EU and Japan combined make up 30 percent of the world's total and they are both among the largest trading partners with the US. If they waive tariffs for each other while their trade disputes with the US escalate and tariff as well as non-tariff barriers increase, their bilateral goods trade will grow to exceed their trade with the US. This may have limited impact on the US. But when such impacts accumulate, it will overwhelm the superpower. US media will track and magnify the impacts, shaking the US will for trade protectionism.

The Trump administration has started a protracted trade war that the US is bound to lose. Like previous traditional wars that it launched, Washington is confident at the beginning that it can swiftly crush opponents with its advantage in strength. But when the aggression turns into long exhausting warfare, it will be dragged into a strategic disadvantage.

The Japan-EU EPA is the latest sign that the world isn't overwhelmed by Trump's trade threats. So far, few countries have yielded to US trade pressure while most have imposed retaliatory tariffs. In the meantime, countries are increasing their collaboration on trade.

Such global resistance is an instinctive reaction to trade hegemony. The resistance doesn't need someone to organize it. The Trump administration has significantly underestimated the resistance that his bullying will encounter.