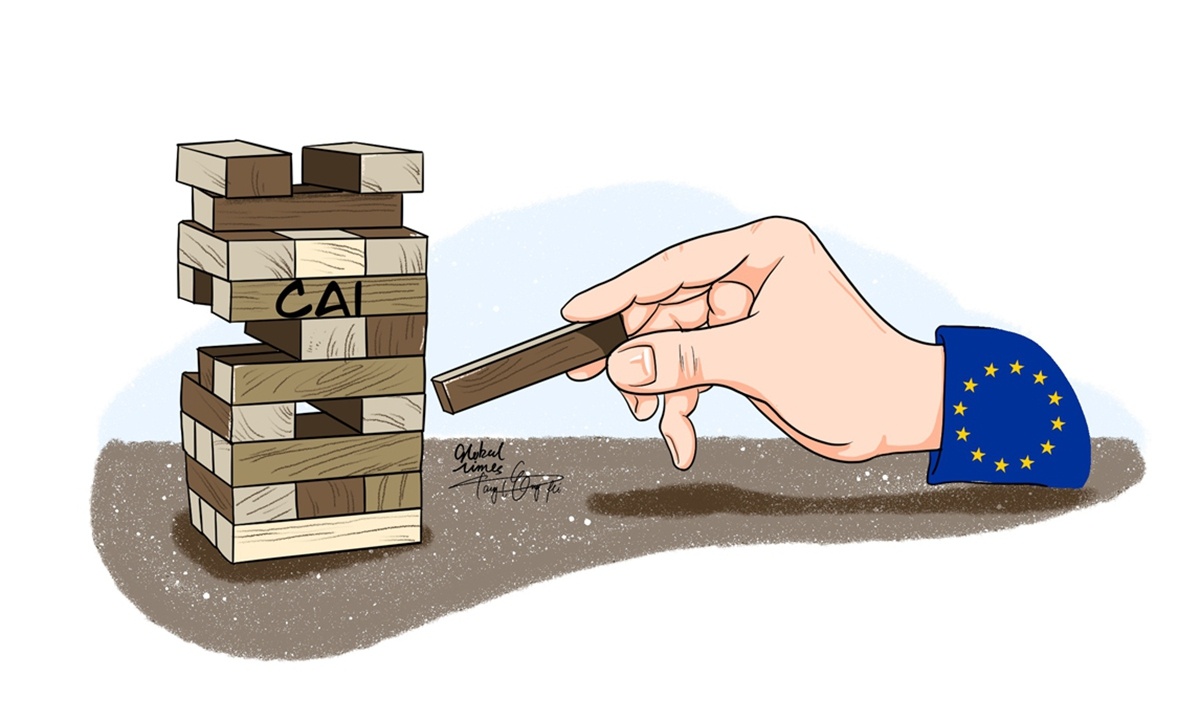 The European Parliament passed a motion with overwhelming majority on Thursday to freeze discussions on the EU-China Comprehensive Agreement on Investment (CAI). Even though the motion cannot determine the ultimate fate of the CAI, it means the European Parliament will halt relevant ratification, an intermediate step for the agreement to take effect.

The conditions imposed by the European Parliament for resuming ratification process are rough and arrogant. It demands that "China lift the sanctions before Parliament can deal with the CAI." These sanctions imposed by China are actually countermeasures against the EU's sanctions over Chinese officials and entities.

There is no way China will lift those sanctions under pressure from the European Parliament. The European Parliament said in the motion that it "calls on the Commission to use the debate around the CAI as leverage to improve the protection of human rights" in China. Such an intent will be resisted and despised by China.

It took China and the EU seven years to conclude negotiation of the CAI. After both sides had reached a consensus, the European Parliament created a disturbance. This is a flaw of the EU - it is incapable of fully complying with the rules. It shows the uncertainty that the EU, as an economic partner, may make an issue due to political considerations.

However, the CAI is a highly reciprocal cooperative framework, rather than unilaterally being favorable toward China. China has also made vital concessions in negotiations. A large number of European companies have high expectations for the CAI's smooth coming into force. The European Parliament has struck a blow to their expectations and aspirations. The European Parliament has shown a hard-line stance, believing that China is unilaterally eager to pass the CAI and the EU can use freezing the deal as a weapon to punish China. This is to please themselves, misleading and deceiving European public opinion.

China, other EU organizations other than the European Parliament, and many more European countries are willing to continue pushing the CAI to come into force. Yet the current political atmosphere in Europe is very restless, which is heavily influenced by the US. There are some arrogant voices and even hostility against China in Europe, which gravely deviates from the real interests of Europe.

China at the moment might as well stay calm. On one hand, we need to stick to our principles. On the other hand, we should continue to strengthen cooperation and interaction with the rational forces in Europe and expand the room for economic and trade cooperation between the two sides. As long as more Europeans realize the benefit of cooperating with China, the European Parliament will lose to rational forces of the EU.

After all, the CAI is in the overall interest of the EU. It also fits the general direction of the EU's strategic autonomy. The US has instigated conflicts between China and the West on human rights issues and turned the Xinjiang issue into a major clash between the two sides. It is out of Washington's strategic ambition to contain China's rise and maintain its own hegemony. By dancing to the US' tune, the EU is destroying its most important economic cooperation agreement with China. It is sacrificing its interests for the goal of the US.

The Biden administration is now engaged in "human rights diplomacy." This way, the US can maximize the mobilization of Europe and push it to the front line of the conflict with China. If the China-EU investment agreement will be put on hold for a long time, then Europe, not the US, will make the biggest move in the economic game with China since US President Joe Biden took office. Europe is achieving US strategic ambitions at its own expense.

Europe wants to increase its influence in global affairs and prevent itself from being marginalized. To accomplish that, it is most crucial to strengthen itself and stabilize its development momentum. To hype human rights issues is not going to be helpful. We believe that Europeans, who have a long cultural tradition of strategy, are capable of figuring this out in today's complex global competitions. We also believe they will not let certain radical emotions dominate their strategic choices eventually.

We know that some radical emotions within Europe have to be released. Some disruptions will inevitably occur. Thus, let the China-EU investment agreement face more challenges, because good things don't come easy.

At the same time, China and European countries can still achieve many things through bilateral efforts, while China can well stay patient. We will hold an optimistic attitude, but we also accept whatever comes.