OPINIONS EU's new lifeline may not be enough to save May

EU's new lifeline may not be enough to save May 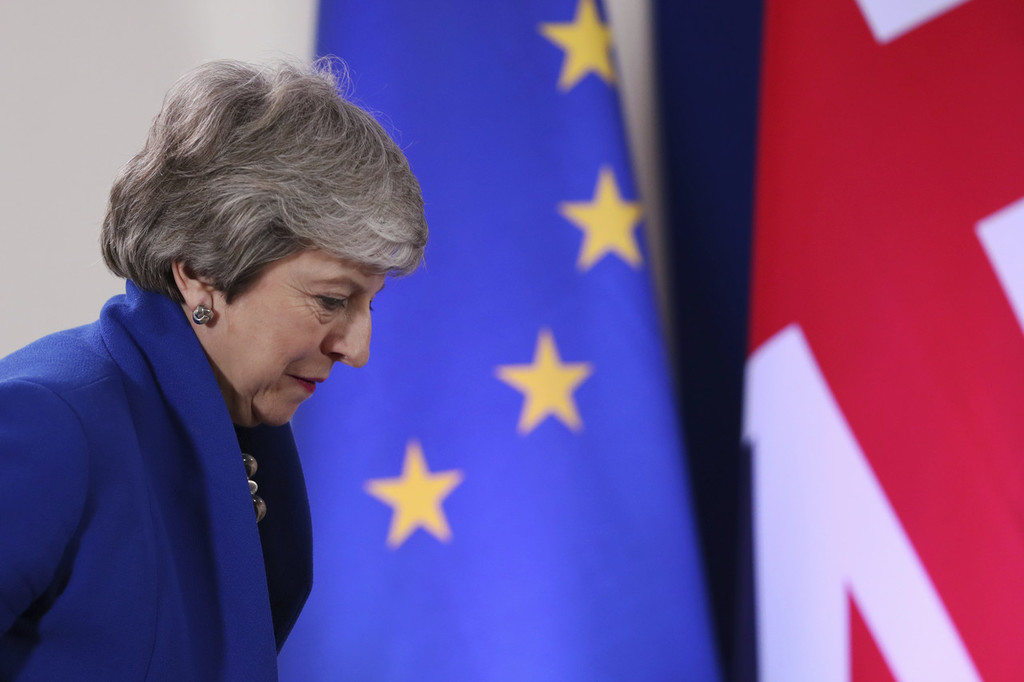 British Prime Minister Theresa May arrives for a media conference at the conclusion of an EU summit in Brussels, Thursday, April 11, 2019. (Photo: IC)

On Thursday, the European Union gave British Prime Minister Theresa May until Oct 31, four months more than what she had sought, to resolve the domestic deadlock over Brexit.

The lengthy and lingering Brexit process shows that the May government cannot handle the pressure from the British parliament and EU leaders. To begin with, the May government didn't consider the opposition's suggestions on Brexit seriously, and couldn't sort out matters within the ruling coalition and counter the EU's tough demands.

Hard-liners within the Conservative Party-Democratic Unionist Party coalition government refuse to accept the "backstop" arrangements for Northern Ireland (that is, not having a hard border between Northern Ireland and the Republic of Ireland under any circumstances) in the Brexit negotiations with the EU. For example, Jacob Rees-Mogg, leader of the hard-line Brexiters, said he couldn't accept the deal, and the DUP openly claimed May had compromised British interests on the issue.

To make matters worse, May is also facing opposition within her Conservative Party. After the second Brexit amendment was rejected, many among the Tories said May should resign. This added fuel to former British foreign secretary Boris Johnson's campaign against May and helped him re-emerge as a possible alternative to May in the future.

The hung parliament following the snap election in June 2017 forced the Conservatives to form a coalition government with the DUP, which presaged that the Brexit negotiation would encounter many twists and turns. Plus, the failure of May's initial Brexit plan meant the deal with the EU would face strong resistance from British members of parliament.

Subsequently, Labour Party leader Jeremy Corbyn gave a call for a second referendum to settle the future relationship between the United Kingdom and the EU. However, there are contradictions within the Labour Party, too, over Brexit. Which means there are not only inter-party differences but also intra-party disagreements over Brexit.

About 1 million Britons participated in a massive demonstration on March 23 to express their frustration with the Brexit process and demand a second referendum. But a second referendum could be held only after the parliament discusses and decides whether it would be on a hard or soft Brexit, or on staying with or leaving the EU.

Besides, there is little possibility of the parliament approving May's third Brexit deal if it is not substantially changed. In fact, John Bercow, the speaker of House of Commons, has said that since May's two previous Brexit drafts have been rejected, the third must have substantial changes.

Therefore, it appears May's government has little chance to reach a new deal with the EU. Which means the British government needs to renegotiate with the EU. Ironically, it also means Britain which decided to leave the EU has to take part in the European Parliament elections on May 23.

Ever since Article 50 of the Lisbon Treaty was invoked in March 2017, the UK's negotiating position has been weakening for various reasons, including internal political wranglings and the EU's tough conditions, although European Council President Donald Tusk and European Commission President Jean-Claude Juncker both have said the UK's dominant right in Brexit is still in the hands of its people.

So, given the remote possibility of a large-scale compromise on either side, what the EU could do is to count on the May government's political acumen to get the new Brexit deal through the British parliament. And to maintain stability, the EU could try to minimize the negative effects likely to be brought about by Brexit.

And since the EU would accept a hard or soft Brexit, or for that matter a no-deal Brexit, the onus is squarely on May to decide whether to try and get another draft Brexit deal through the parliament, call a snap poll, organize a second referendum or just demit the prime minister's office.