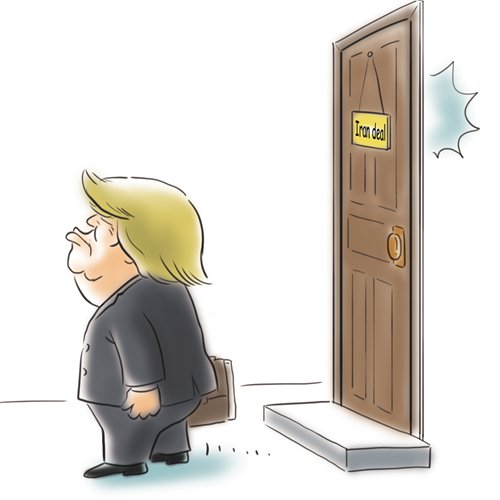 Illustration: Liu Rui (Photo: Global Times)
The US withdrawal from the Iran nuclear deal - the Joint Comprehensive Plan of Action - caused frustration in Europe. European leaders immediately criticized the decision of US President Donald Trump. Britain, France and Germany issued a statement emphasizing their continuing commitment to the agreement. The Iran issue will be discussed at the EU summit in Sofia on May 17 with the purpose of salvaging the agreement despite the American stance.
Brussels' policy is not surprising. When Trump decertified the plan in October 2017, the EU thought a problem that was apparently solved might return to the agenda. From a European perspective, although issues related to Iranian ballistic missiles as well as increasing tensions in the region were of concern, they had to be addressed outside the Iran nuclear agreement.
Trade and investment significantly influenced EU relations with Iran. After July 2015, the EU did not waste time. Several examples involving France, Germany, Italy and the UK can be given. In December 2016, French aerospace industry pioneer Airbus signed a contract for 100 aircraft with Iran Air and in July 2017 energy colossus Total and the National Iranian Oil Company (NIOC) agreed on the development and production of phase 11 of South Pars, the world's largest gas field. In August 2017, German automobile group Volkswagen returned to the Iranian market after 17 years and began selling vehicles. In July 2017, the Italian railway company Ferrovie dello Stato inked an accord with Iran Railways to build a high-speed railway between the cities of Qom and Arak. Reuters revealed in September 2017 that London-based renewables developer Quercus Investment Partners had plans to invest over half a billion euros in a solar power project in Iran.
The US refusal to waive sanctions might put a brake on the EU-Iranian business honeymoon. Brussels is concerned that Washington could use its influence over the world's financial system to prevent businesses in other countries that have not re-introduced sanctions on Iran. The new US ambassador to Germany, for instance, who presented his credentials in Berlin only a few days ago, tweeted that German businesses should halt their activities in Iran "immediately."
Under these circumstances, the EU is working to shield its companies. One option is to restore so-called blocking regulations. The regulations were agreed in 1996 as a countermeasure to the US' extraterritorial economic sanctions against Cuba, which EU governments argued benefited Washington's foreign policy interests at the expense of European sovereignty. Now they can perhaps offer the necessary legal protection to European business interests.
The determination of EU leaders and European companies to access new markets - such as the Iranian one - is understandable, especially under circumstances of anemic growth in Europe. On the other hand, the security dimension as outlined by the US administration cannot be ignored. The day after can hardly be harmonious for transatlantic relations and the striking of a delicate balance seems difficult.
The EU-US disagreement is generally placed in the context of deteriorating transatlantic relations after Trump came to power. It is not only the nuclear deal. Trump's pressure on NATO European member-states to increase their contributions to the defense budget, his withdrawal from the Paris climate accord, his will to introduce tariffs on US imports of European steel and aluminum and his generally indifferent and sometimes scornful stance vis-à-vis the project of European integration are creating misunderstandings.
Both French President Emmanuel Macron and German Chancellor Angela Merkel failed during their recent Washington visits to convince Trump to preserve the international nuclear agreement and simultaneously negotiate side-deals to address security concerns.  It is obvious that while the EU's bargaining ability is still limited, the US president is steadily following his own path in international politics.