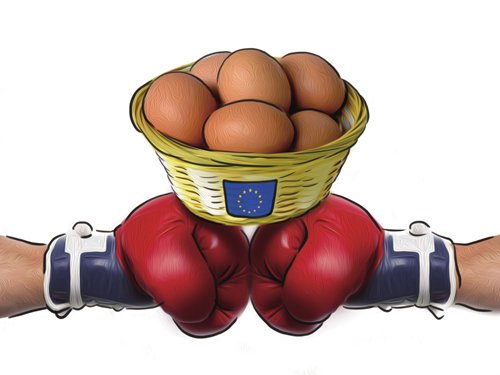 The escalation of the trade dispute between China and the US has grabbed worldwide attention. With a paradoxical mindset, Europe has been concerned the trade spat will hurt international trade and global economic growth. Brussels will seek to divert pressure on the EU economy and trade created by US protectionism.China and the US are the EU's two largest trading partners, trade disputes between Beijing and Washington can jeopardize the EU economically. Only by supporting a multilateral trading system can the EU safeguard its own interests.Since the US President Donald Trump administration imposed tariffs on imported steel and aluminum, the EU has expressed strong dissatisfaction toward US unilateralism and sought a special exemption through countermeasures. After Trump proposed to slap stiff tariffs on some $50 billion in Chinese imports and later raised the figure to $100 billion under Section 301, the EU showed concern about how this trade dispute will impact the world.The EU does not support measures that would run counter to World Trade Organization law, Daniel Rosario, spokesman of the European Commission, said. The German-based think tank IFO warned of the risk of protectionism spreading to other sectors and countries as a result.In 2017, the US at 631 billion euros ($770 billion), or 16.9 percent of total EU trade in goods, and China at 573 billion euros ($700 billion) or 15.3 percent, continued to be the two main goods trading partners of the EU. With the Sino-US trade dispute undermining its bilateral supply chain, value chain and economic future, the EU will face a shrinking market of intermediate products and components. The weakened purchasing power of China and the US due to the trade dispute will affect the exports of EU cars, agricultural products and luxuries. Marcel Fratzscher, president of the Berlin-based German Institute for Economic Research said, "A significant cooling of global and German economic momentum would be the inevitable result of an escalation of the international trade conflict." These years, the EU frequently stirred up trade disputes with China in steel capacity, investment and market access. It also seeks to benefit from the Sino-US trade dispute. When the US proposed tariffs on steel and aluminum this March, the EU made efforts to gain a special exemption and hyped the steel overcapacity issue. Meanwhile the EU is promoting protectionist rules. In December, the European Commission issued a report on China, pointing fingers at China's socialist market economy. On the same day, a unilateral amendment to new EU investigation rules for anti-dumping entered into force. The EU hoped the amendment would replace the World Trade Organization (WTO)'s identification of anti-dumping and countervailing duties. After the US sued China over intellectual property, the EU and Japan also asked to join the Trump administration's WTO case over China's alleged discriminatory technology licensing. The EU also worked on establishing an investment examination mechanism like the Committee on Foreign Investment in the US to be alert to investment in the high-technology industry by countries outside the EU.When the US made trouble for China in intellectual property, steel and investment mechanisms, the EU also pretended to guarantee trade rules dominated by the West out of its own interest. The EU attempted to downplay its own economic and trade contradictions with the US by highlighting US trade disputes with China.The EU also treated the WTO mechanism with pragmatism, relying on it when the mechanism was beneficial and abandoning it when not.Loyalty and compromise to Trump cannot win the EU maneuvering room. When Trump mentioned the trade issue, he not only criticized China but also called the Germans "very bad" for their trade surplus with the US and frequently threatened to slap a new tax on vehicles made by European carmakers. The US also claims that Germany uses a "grossly undervalued" euro to "exploit" the US and the chances have increased that the US Treasury will label Germany a currency manipulator.Although the US deems China a strategic and economic rival, to abolish the trade deficit the US acted without considering who is an opponent or an ally. Trump's proposed tariffs on steel and aluminum suggest he is hoping to create bargains for other countries to compromise. Currently the EU is angry but can say nothing about the US action with a gun to its head. It can only seek a permanent US tariff exemption, even at the sacrifice of others' interests. If Trump imposes tariffs on some other products in the future, who will be the scapegoat for the EU and how can the EU compromise again?It comes as a relief that although the EU sees multilateral trade as a pragmatic approach, it still advocates for the mechanism. The EU requested to join the dispute brought by China to the WTO over US import tariffs on steel and aluminum. Maybe the EU just wants to play both sides at the WTO and earn a US tariff exemption. In future trade policy, the EU can only protect its own and world economic development by standing on the side of multilateralism and free trade.