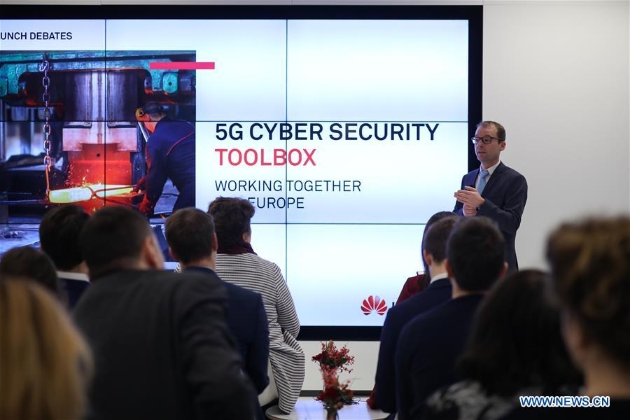 Koen Claesen, Huawei Senior Cyber Security Advisor, speaks during a debate at Huawei Cyber Security Transparency Center in Brussels, Belgium, on Jan. 30, 2020. Huawei held the debate on 5G cyber security toolbox on Thursday, following the issuance of the EU 5G "toolbox". The European Commission on Wednesday issued the non-binding guidelines -- agreed by 28 member states -- known as a "toolbox" for 5G security, where the EU sets out detailed mitigation plans for each of the identified risks and recommends a set of key strategic and technical measures. (Photos: Xinhua)

Divorce seems to be not the only thing London and Brussels have agreed on with each other recently.

On Wednesday, the European Union (EU) issued a set of guidelines for 5G security, which stress the importance of diversified vendors and rule out bans on any specific company or country. Brussels' decision came just one day after the British government approved a limited role for Chinese telecom company Huawei in the country's 5G network construction.

These almost synchronized decisions by Britain and the EU to allow Huawei to participate in the building of their 5G networks, albeit with some restrictions, are an apparent vote for open-mindedness when it comes to international technological cooperation.

The moves also show that Britain and the EU have kept cool-headed and determined to make independent choices in line with their vital interests, rather than being coerced by some zero-summers in Washington to dig trenches and erect barriers against Chinese tech firms.

Undoubtedly, a stronger 5G partnership can benefit both China and the European countries.

The 5G technologies not only promise a ultrafast data transimission speed, but can also open up new possibilities in mankind's future way of life such as autonomous vehicles and remote surgeries, whose benefits are too far-reaching to be declined.

Huawei, a trailblazer and leader in the next generation of mobile telecommunications technologies, can offer its partners quality products and services at competitive prices.

Embracing Huawei will also help bolster the overall cooperation and mutual learning between China and Europe in science and technology, which in recent years have seen continous headway.

In late 2017, Beijing and London launched a joint strategy for cooperation in science, technology and innovation, the first of its kind China has developed with another country.

At the heart of Europe, the China-Belgium Technology Center project situated near Brussels has been making steady progress and is scheduled to open in autumn. It is expected to provide a gateway for cooperation in innovation, investment and industrial partnerships between China and Europe.

With respective strengths in advanced technology, digital economy and the new generation of information technology, China and the EU can jointly breed remarkable changes in areas like smart cities, artificial intelligence, life sciences and smart manufacturing.

That being said, both the British government and the European Commission still have not completely cleared up their doubts about 5G cooperation with China.

Britain said it would exclude Huawei from sensitive core parts of 5G and cap Huawei's market share of non-core 5G network. The EU, meanwhile, urged its member states to apply restrictions "for suppliers considered to be high risk."

It is fine for governments around the world to take pre-cautionary measures, especially when such modern technologies as the 5G are becoming increasingly integrated with almost everybody's everyday life. However, these measures should be grounded on facts, not fabrications.

In fact, London's and Brussels' decisions to allow a limited role for Huawei in their 5G development attest to the Chinese firm's credible track record in serving its customers' interests.

Now that London and Brussels have made their decisions, it is hoped that they can provide a rather fair and open business environment for Huawei and other Chinese businesses seeking to invest in Europe, and open up even wider.

Ultimately, Chinese firms like Huawei will prove their European partners' remaining concerns are unfounded and unnecessary.