OPINIONS Every move to stigmatize China evokes our historical memory

Every move to stigmatize China evokes our historical memory

A few years ago, the Chinese movie Unexpectedness brought us a lot of joy. But when I thought of the name of the movie this spring, it's because of the continual stigmatizing of China in the context of global COVID-19 pandemic by some Western politicians and media outlets. From passing the buck to China to demanding China pay compensation over the coronavirus outbreak, their clumsy performances have shamelessly intensified. As a person working in the Chinese media, I want to say a few words to Western readers who read this article. 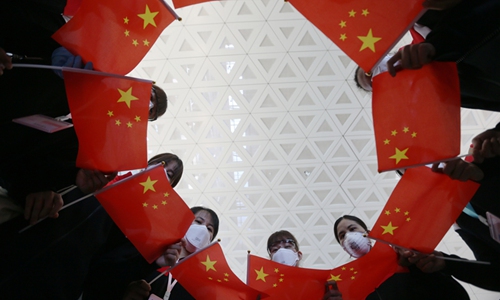 First, I want to introduce you to a traditional story that is well-known in China. A wolf was shot by a hunter, and it met a kindhearted person when it was fleeing. The person saved the wolf as it wished. After the hunter left, the wolf said to the kindhearted person: "You have saved me. Now I am hungry. Since you've come this far helping me, just let me eat you." The wolf didn't succeed in the end, and it was killed by another good person who came along.

The story has been passed from generation to generation since the 13th century, and we Chinese compare people with bad qualities to this wolf. We call them "the Wolf of Zhongshan." The story was also quoted in China's great classical novel Dream of the Red Chamber, and there is a famous quote: "You are the Wolf of Zhongshan, a villain holding sway."

Second, I want to explain the title of this article. We are in a world of information, and everybody's words and deeds can spread to all corners of the world. When some Western politicians and media try to insult China, we know about it instantly.

Why does every move to stigmatize China evoke our historical memory? This is because in the Chinese calendar cycle, the year 2020 is the "Year of the Gengzi," which occurs every 60 years. What happened to China during the "Year of the Gengzi" in 1900? The Eight Nation Alliance - you can check which eight countries, if your history book is reliable - invaded China and they were caught burning and looting in Beijing. They used machine guns to slaughter ordinary people, ransacked the royal palace, and destroyed cultural relics. As if that was not enough, the very next year they had the temerity to demand huge compensation from China.

Now, 120 years later, in this "Year of the Gengzi," when the descendants of some of the Eight Nation Alliance shamelessly demand compensation, they evoke our historical memory of humiliation. Many Chinese netizens have responded strongly: "They want compensation? If they want to get even with China, let us start from the damage China suffered since the first Opium War in 1840!"

Finally, I would like to suggest that in addition to publish the changing epidemic situation every day, Chinese media should also publish another data table, which record the words and deeds of foreign politicians and media who stigmatize China every day. The data table should be recorded, published and updated daily. You may ask why. The answer is simple: First, we should analyze these words and deeds just like analyzing viruses to see where the root cause is. Second, we should expose these dirty mental viruses to human conscience. And finally, we should remember them.

The strength of China today comes from its history of about 5,000 years. With such a long history, China has not only strength, but also incomparable patience.

The author is a host on China Central Television. opinion@globaltimes.com.cn