Ex-aides' convictions may not harm Trump

Last week, Michael Cohen, longtime former attorney of US President Donald Trump, pleaded guilty to eight felonies, including illegal campaign finance charges over hush money paid to two women, hinting he was ordered by Trump to do it. 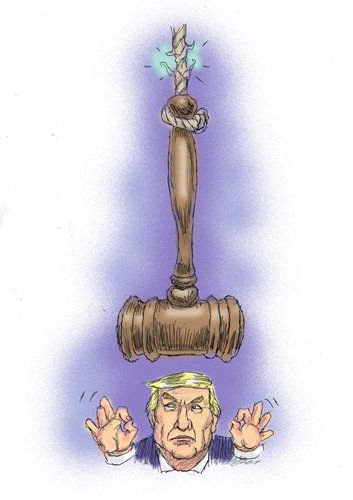 The two incidents, which came exactly at the same time, have caused a sensational effect. The public believes that the end of Trump's presidential term is not far away. NBC News called it "a dark day for Trump" and "the darkest day for the presidency since Watergate." New Yorker opined that this is "the worst hour of his entire life."

The media's obsession with the conviction of Trump's two associates seems to indicate that the US president's position is in peril. Many observers think this will deal a heavy blow to the government and Trump will find it hard to get out of it. The Democrats believe Cohen's conviction will not only damage the efforts of Republicans to secure a majority in the Congress ahead of the mid-term election, but also lend momentum to the discussion on impeaching Trump.

However, a close look at the incident could make one think otherwise. Cohen's guilty plea may incriminate Trump, but not as seriously as the world thinks. If Cohen cannot present evidence to prove that Trump had knowledge of the payments and told him to pay the money, accusations that Trump has violated campaign finance laws are not on solid ground. To say the least, even if Trump incited Cohen to pay hush money, this leaves room for legal argument.

In US election campaigns, it is not rare for a candidate to pay hush money to avoid the campaign being affected. As long as the candidate reveals that he paid the money, the act can hardly be characterized as a crime.

Cohen's problem is that he paid the money himself and did not report it. But even if this is the case, whether his act violated campaign finance laws still awaits judgment. Trump's argument also falls in this logic - he stressed that two of the eight felonies in which he was most directly implicated are not actually crimes.

It is also disputable whether violation of campaign finance laws amounts to the Constitution's definition of "high crimes and misdemeanors" for impeachment. If evidence cannot substantiate the allegations against Trump, he could just resort to the same trick by calling all this a "witch hunt."

Currently, it does not matter if Trump did violate campaign finance laws. What makes him sit on pins and needles is the Russiagate investigation led by Robert Muller. If the investigation results prove that Trump himself colluded with the Russians and got involved in election meddling, the crime of treason will put him on a precipice.

Muller's investigation is ongoing, though at a moderate pace.

Trump has also been preparing for the worst-case scenario. He lashed out at the Justice Department and FBI, and publicly criticized his own Attorney General Jeff Sessions.

It has also been revealed that Trump was considering dismissing Muller to end the Russiagate investigation. Deep down he knows that if the probe continues, it will not only affect his administration, but also encroach upon his political career.

Cohen's guilty plea is only the tip of the iceberg. The key questions are, will Cohen reveal more improper deals from Trump's campaign? Will more of Trump's inner circle be revealed? Will it be proved that Trump colluded with the Russians?

Cohen's guilty plea is more of a blow to the Republicans before the mid-term election than to Trump himself. With the Blue Wave of the Democratic Party in full fury, the Republican Party will face the biggest challenge it has ever encountered in recent years.

For the Democratic Party, securing its position in the House of Representatives is key to starting the process of impeaching Trump.

Whether Trump can complete his four-year term will be determined by the vote in November. Before that, he is safe.