Earlier this month in Xi’an, Shaanxi Province, a cellphone lane was constructed for the multitudes of people who find it too hard to put down their phones while walking. 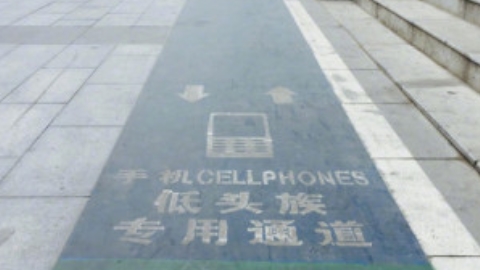 It is a 100-metre-long rubber track constructed by a nearby shopping mall. Such a sidewalk, allegedly, allows some protection to distracted pedestrians.

Today it’s common to see people walk with their head buried over cellphones. It is as annoying as it is terrifying.

What if those, too engrossed in their smartphones, step off the curb into the traffic? A dual-tasking walker also poses a threat to other pedestrians.

Clearly, it is a behavior that should be strictly regulated or legislated. A walking lane dedicated to addictive phone users sounds more like a gesture of encouraging such behavior, without affording actual protection to distracted walkers.

It might mislead people into thinking that once they step on to this sidewalk, they can text or check WeChat without bothering with their surroundings, while in actual fact there is nothing more risky than doing this. They might bump into each other. They might veer off into some motor vehicle traffic.

It is as yet unknown the true motivation of having such a lane built. Perhaps it’s just a gimmick designed to raise the public’s awareness about the safety issue of walking while using cellphones.

But if it was built in earnest for the stated purpose, it could be justly suspected of wasting public resources, with some netizens ridiculing it as the “blind” or “zombie” track. Some even sarcastically envisage a future where lanes are classified into distinct lanes for phone users, for strollers and for dog walkers, with delivery scooters scurrying to and fro through all of them.

As many will concur, care-free ambling on the streets is increasingly a luxury these days. In an over-connected world, given the growing addictiveness of mobile phones, what we need is a warning sign of some sort in public places to put mobiles down, rather than restricting these distracted phone users to certain localities where they can feel more comfortable using their phones while walking.