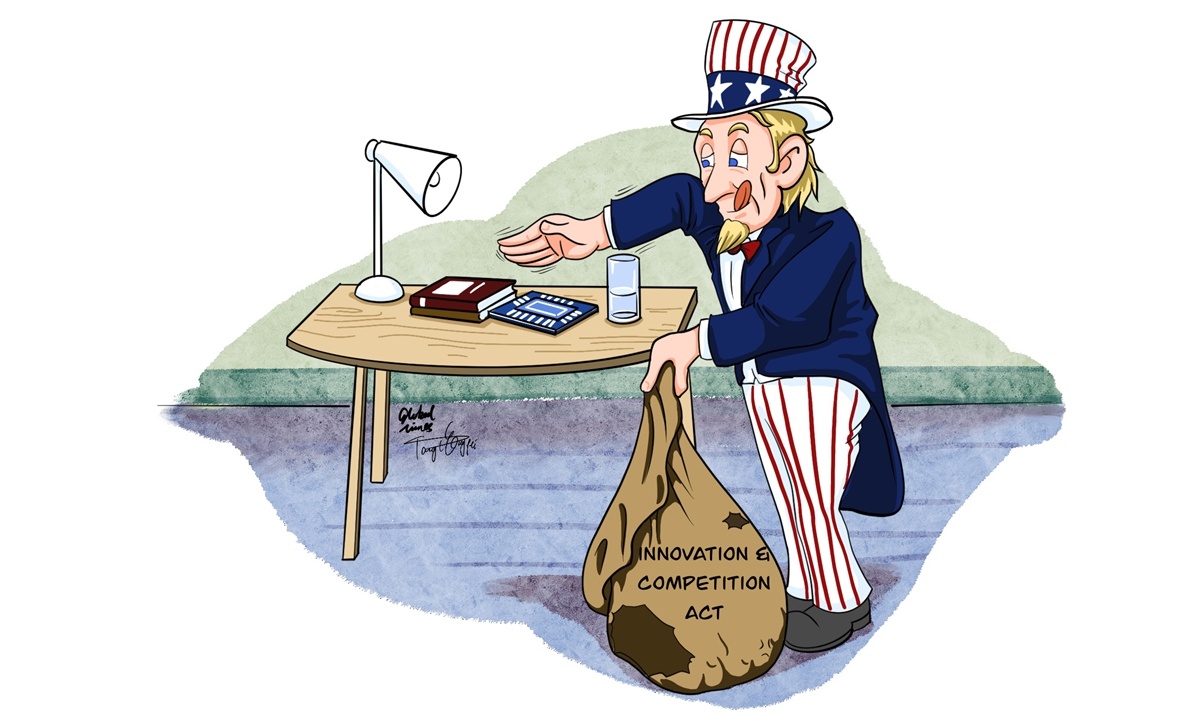 Republican and Democratic members of the US Congress are expediting debate over a bill targeting China in recent days. While US senators keep bringing up new amendments against China, the bill's lead sponsor Senate Democratic leader Chuck Schumer hopes to complete the floor passage of the law in coming weeks.

The 1400-page so-called "Innovation and Competition Act" is planned to cost about $200 billion to challenge China's growing technological strength. It expands from a proposal previously known as the "Endless Frontier Act," which aims to invest around $120 billion to out-compete China in areas including 5G, artificial intelligence (AI), and quantum computing, according to US media reports.

With more proposed provisions and inputs to the sweeping bill reflecting almost all fronts in the US-China rivalry, US politicians seemingly want to mobilize as much resource as possible to confront China rather than to rescue the struggling US economy out of the COVID-19 pandemic impacts.

While Republican and Democratic politicians have had difficulty in reaching agreements on many issues, it seems only "confronting China" could bring the absurdly divisive US parties together, no matter it's really about China or not. If they can actually settle on all the new requests for changes and meet the ambitious timeline to complete the passage within weeks, it shows that the anti-China fever among US politicians has reached new highs.

A closer look into the bill indicates that the US' so-called technology and innovation plan is a grab-bag of anti-China provisions reflecting a new Cold War mentality. Some of the recent anti-China amendments proposed by US politicians clearly have nothing to do with technological innovation, and others are seriously lack of objective and rational view on the technology competition between China and the US.

For instance, Republican senator Marco Rubio, a hard-liner when it comes to anti-China legislation, reportedly wants to add a clause to the bill to "shield research and development from threats of espionage or theft from China." The proposal will prohibit people who have received financial or other support from the Chinese government from receiving funds authorized by the legislation, a Bloomberg report said.

To artificially cut scientific and technological cooperation is a typical action that is detrimental to both sides. Such proposals reflect the zero-sum game mindsets of American politicians. It's hard to imagine what kind of future will the American technology development be led to, if US politicians stubbornly hold on to such narrow-minded approaches.

Even if the sole purpose is containing China's technology development, such political actions have been repeatedly proved hard to escape the fate of failure. For instance, as the US intensify crackdown on Chinese technology giants such as Huawei, they have been pushed to shore up global competitiveness by improving independent research and development ability.

True that China and the US are in an intensifying competition when it comes to technology; however, it remains crucial for political elites in Washington to take a sensible view to balance competition and cooperation. Judging from the past experience of China-US cooperation in various fields and the actual consequences of the trade war, cooperation will benefit both sides, while confrontation will hurt both.

It may be time for American politicians to take a break from the frenzy and take a sober look back at their strategy toward China, otherwise, when they look back after a while, they may have to regret hurting the interests of their own.

The author is deputy director of the Center for American Studies, Fudan University.