• Donald Trump claims that China drained US money to rebuild itself, a charge repeated by his vice president

• This view has been floating around Washington in different forms since at least 2015, but is not taken seriously by scholars and professional diplomats 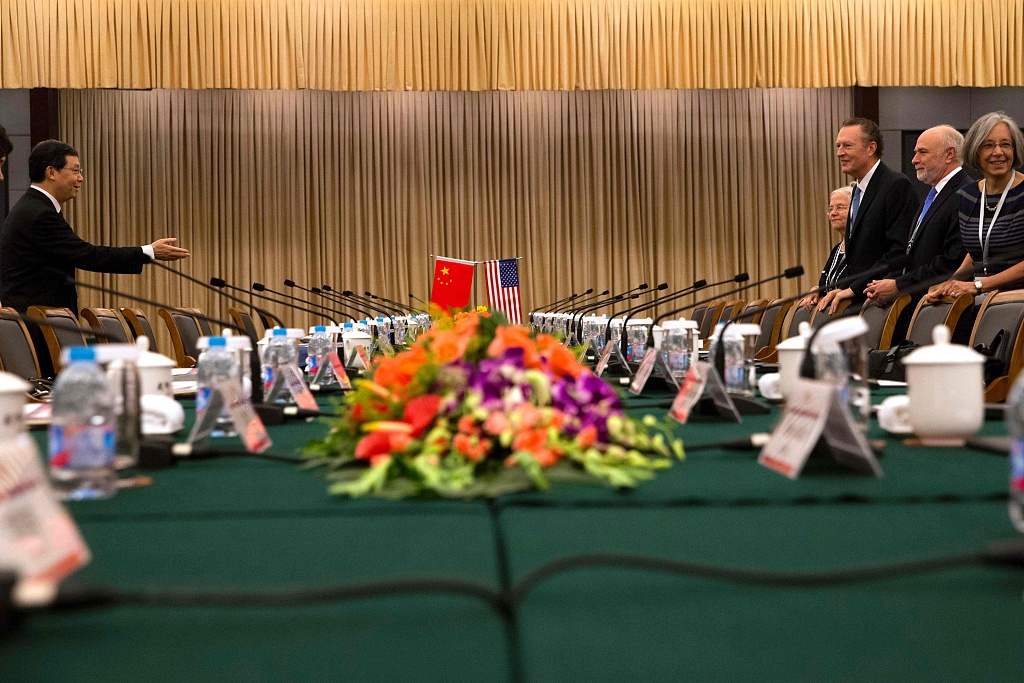 The first China-US judicial dialogue is held in Beijing on August 3, 2016. (Photo: VCG)

US Vice President Mike Pence recently gave a speech, where he attacked China's domestic and diplomatic policies. Some US media said Pence's accusations against China lack evidence, and that some of his remarks were irrelevant.

When he mentioned the US trade deficit with China, he quoted President Donald Trump as saying that the US "rebuilt China" in the past 25 years.

For Chinese audiences, such remarks are simply ridiculous. However, such a notion does have the support of some American politicians and scholars. Where did such views advocated by the US president come from? The Global Times offers some answers.

"You know, we rebuilt China. The money they drained out of the United States has rebuilt China. And they've done it through monetary manipulation, by devaluations," Trump said during an interview with the New York Times in April 2016. He was campaigning for the Republican Party presidential nomination at that time.

A search on the internet shows that since 2018 mid-term election campaigning began, Trump has been repeating this narrative at rallies in many states.

In June, he said, "You see what's happening with China. We have no choice. This should have been done many years ago. We have no choice. China has been taking out $500 billion a year out of our country and rebuilding China. I always say, 'We have rebuilt China.' They've taken so much.  It's time, folks. It's time."

Trump hammered this point at the rally for GOP Senate candidate Josh Hawley in Springfield, Missouri in September.

On October 4, Pence said at the Hudson Institute, "Over the past 17 years, China's GDP has grown nine-fold; it has become the second-largest economy in the world. Much of this success was driven by American investments in China."

"China's actions have contributed to a trade deficit with the United States that last year ran to $375 billion - nearly half of our global trade deficit."

Trump and Pence, are not the only ones who have said this. Such a fallacy is also popular among some scholars in US think tanks.

Although no American scholar has ever explicitly said that "America rebuilt China," there are many who believe that the US and other Western countries have helped China achieve its economic miracle, such as James Mann, the writer of the book The China Fantasy.

A more typical example is Michael Pillsbury, director of the China Program of Hudson Institute.

"For more than 40 years, the United States has played an indispensable role in helping the Chinese government build a booming economy, developing its scientific and military capabilities," he wrote in his book, The Hundred-Year Marathon: China's Secret Strategy to Replace America as the Global Superpower. He continues that the US has helped China take its place on the world stage in the hope that its rise will bring cooperation, diplomacy and free trade to the US.

The BBC commented that Pence's speech specifically referred to Pillsbury and Pillsbury was also praised by Trump as "the leading authority on China," which shows that US authorities have largely accepted his views and recommendations.

Trump is also influenced by perspectives of White House economic advisers such as Peter Navarro, who embellished the "harms" and "threats" China imposed on the US from such aspects as currency manipulation, trade policies and impact of Chinese products on the American market in his book Death By China: How America Lost Its Manufacturing Base. 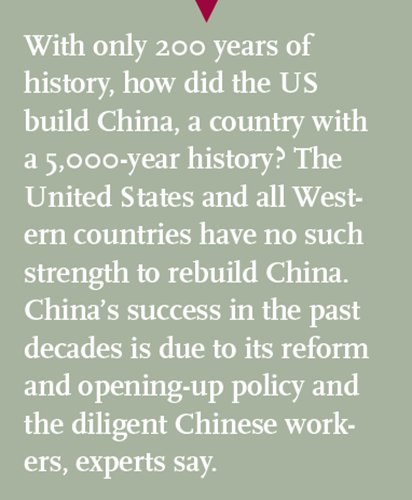 As early as June 15, 2015, Chinese scholar Chen Dingding published an article titled "Time to Bust This Myth: The United States Didn't Modernize China" in the Diplomat, saying that there had been a prevailing view among policy-makers and strategists in Washington that China had betrayed the US.

"It very much sounds like the United States simply handed 'modernization' as a gift to China in the last 30 years or so. This view is flat-out wrong. It not only neglects the huge benefits that China's exports to the United States have on the US economy itself, but also utterly downplays Chinese efforts," he wrote.

"I wrote the article at that time because there were discussions in the US on whether America had brought modernization to China," Chen, a professor of International Relations at Jinan University, told the Global Times.

"This view is biased. It's not mainstream in the US, nor have there been politicians or academics who have held the claim."

Wu Xinbo, director of Fudan University's Center for American Studies, echoed Chen's view. He said the claim that "the US rebuilt China" was almost nonexistent before. The popular way to describe the two countries' relationship is that the US made contributions to China's modernization and economic rise, which is closer to reality.

"In official statements, only the Trump administration has made such a claim and it shows his arrogance and ignorance. In the US, this is not a mainstream voice, and no serious scholar, media or any former US administration, will make such a claim."

In fact, after Trump made the infamous claim during the 2016 election campaign, fact-checking website PolitiFact researched his claim and said that it is an "overly simplistic casting" of the economic relationship between China and the US.

Scott Lincicome, a scholar at the libertarian Cato Institute who specializes in international trade politics, told the website that Trump was right in only one tiny sense.

"Trade with all countries, including the United States, has been part of a major market reform that's lifted millions out of poverty in China. Reforms to property and taxation have been much more fundamental," he said.

Other scholars have also weighed in. "I wouldn't say the US deficits with China rebuilt China, but they may allow China to rebuild itself at a lower domestic political cost," said Michael Pettis, an expert on China's economy at the Carnegie Endowment for International Peace.

Yale University professor Chen Zhiwu says that by Trump's logic, it can also be said that China rebuilt the US by providing it with cheap goods and more savings. "Without these savings or Chinese financing of US government debt and corporate investment, the US will not be able to sustain years of growth in the real estate, defense and commercial sectors. In a globalized world, it is hard to say one country is rebuilding another," Chen said.

On September 19, a New York Times article about Trump's claim that "America rebuilt China" drew numerous comments. Duane McPherson, a reader from New York, said that Trump's claim reflects his zero-sum thinking. "People with this kind of thinking always think if one side gains, the other side loses."

"How can the US still be able to build China when it has borrowed so much money from China? This is ridiculous," a netizen said. "How can the United States build the world's second-largest economy if it can't even rebuild Iraq?" another netizen said.

"The remark lacks historical basis," Florian, a scholar in Berlin who studies China, told the Global Times. With only 200 years of history, how did the US build China, a country with a 5,000-year history? The United States and all Western countries have no such strength to rebuild China. China's success in the past decades is due to its reform and opening-up policy and the diligent Chinese workers.

Looking back on the development of China-US relations, many American media and scholars mention the year 1967. In October of that year, Richard Nixon contributed an article in Foreign Policy magazine, saying, "We simply cannot afford to leave China forever outside the family of nations…" When Nixon became US president, he began to carry forward his China policy.

Even Nixon admitted that his visit to China was not intended to modernize China, but to play the "China card" against the former Soviet Union. At that time China and the US shared security interests, which prompted the groundbreaking meeting between leaders of the two countries and eventually led to the establishment of diplomatic ties.

The report said the US economy only began to be influenced by China-US trade in the 1990s. The Chinese economy's development started when the country reformed its agriculture sector, not when it opened up to the US. The improvement in China-US relations only served as a minor factor in China's development, the report said.

In an interview with Germany's Wirtschafts Woche on October 14, John Nesbitt, a long-time China observer, and his wife Doris believe that China has taken on the role it has for centuries. But many people in the US still look down on China and could not imagine China's rise. In their book China's Megatrends, they concluded that China has been growing in experience. China has been working and learning. Even though it has met with obstacles, it keeps moving forward.

According to German newspaper Süddeutsche Zeitung, the US indeed has been hoping to "rebuild" China, because Washington hopes China's market opening and "democratization" process could move at the same pace.

The Trump administration thinks that China's economic rise could promote "democratization" in the medium term, so that the geographic political competition could be avoided. Though some in the US have warned of the rapid rise of China's economy, the doubters have always been a small group. The Trump administration appears confident in its policy toward China. But the situation has changed.

Wu noted that the "failed China engagement strategy," another popular idea in the US, is also an exaggeration.