Facing arrogant London, Buenos Aires should push back on Malvinas 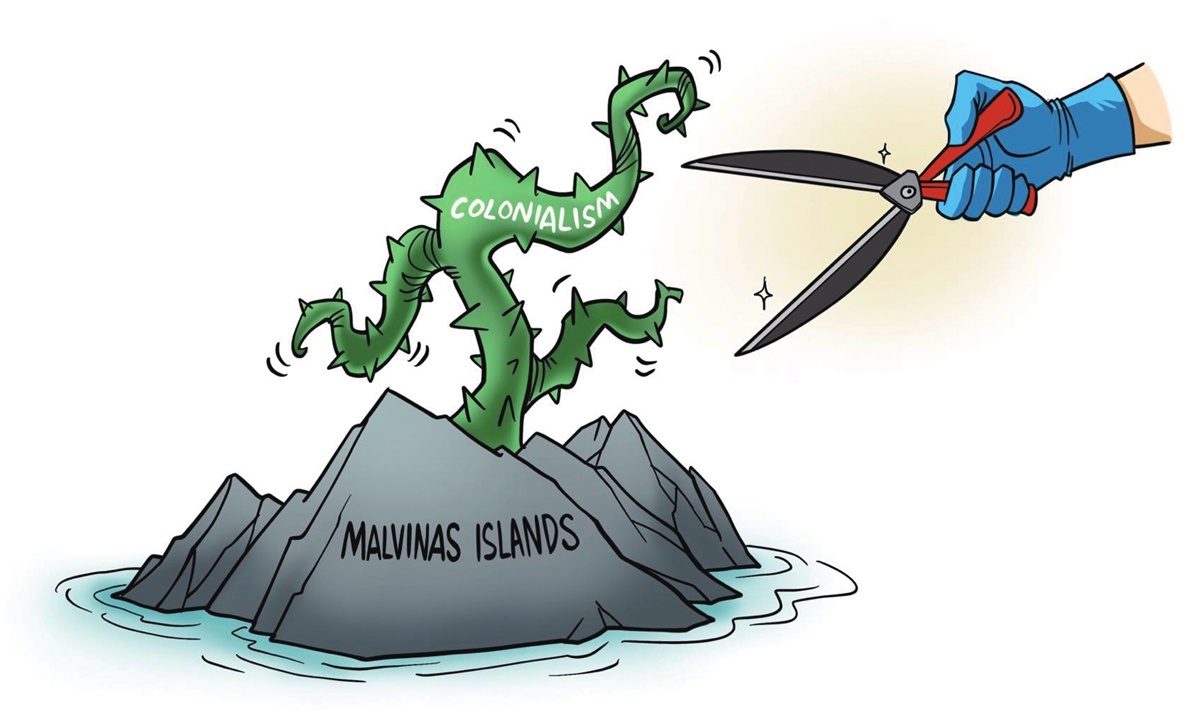 Some British politicians’ mentality is obviously still mired in the colonial era. While continuing to occupy colonies illegally, they are also pointing fingers at the affairs of their former colony. Britain also sent aircraft carrier to waters faraway from its territory in order to flex muscles. However, developing countries’ anti-colonial struggles have never stopped, but have accelerated instead.

Once also a victim of colonialism, China understands well the hardship of anti-colonial struggles. Geng Shuang, China’s deputy permanent representative to the United Nations (UN), on Thursday expounded China’s position on the Malvinas Islands, also known as the Falklands Islands, and called for international efforts to put an end to colonialism there one and for all.

China has held consistent position on the Malvinas Islands issue.

Today, some new backgrounds have emerged in the Malvinas Islands dispute. “On the one hand, there has been a rise in power politics in the international community, harming international rules. On the other hand, the UK will hold a stronger position on some historical issues after Brexit,” Cui Hongjian, director of the Department of European Studies, China Institute of International Studies, told the Global Times on Sunday.

For example, the UN Special Committee on Decolonization in February unanimously ratified its “support for the resumption of negotiations between Argentina and the United Kingdom to find a peaceful solution to the controversy of sovereignty over the Malvinas Islands.” But the UK ignored it. British media express.co.uk even declared that, “The UK has always stood firm against the UN’s resolutions that propose a dialogue between the two countries.”

Given London’s de facto control over the Malvinas Islands, the UK will not give a formal response to Argentina’s request. In this context, the UK has pushed the problem to a point where it seems that it can only be resolved by strength, Cui said.

Cui emphasized that London often claims countries should abide by international law and follow the rules-based order. Yet in reality it believes more in power politics.

But the UK does not have such strength to hold to results of colonial era. According to the government website of the Falkland Islands, Britain registered a formal protest in 1829 to assert its “own sovereignty over the Falkland Islands.” At that time, the British Empire was in its heyday as the only industrialized power worldwide. Expanding on a global scale, the UK once had colonies all over the world. But now, it seems that the “empire on which the sun never sets” has returned to its original point, facing the chaos and difficulties after Brexit.

The UK has emphasized that the Malvinas islanders’ right to “self-determination.” But this is not the case. About 70 percent of the islands’ population are of British descent, primarily as a result of Scottish and Welsh migration to the islands. As then Argentine ambassador to the UK Alicia Castro said in 2012, “This is a special case that involves a colonial territory, not a colonized population; its inhabitants are not the original people of the islands. It is a population installed by Britain after 1833.”

The UN General Assembly Resolution 2065, adopted in December 1965, recognized that the case of the Malvinas is framed in a colonial situation, which should be solved by taking into consideration those expressed in the UN General Assembly Resolution 1514 where the goal of eliminating all forms of colonialism was established. As one of the permanent members of the UN Security Council, will the UK comply with UN resolutions and the rule-based order?

Facing such an attitude of the UK, Argentina should add more strings to its bow. Cui believed that first of all, Argentina should keep putting forward this issue with both the international community and at the UN level.

Second, Cui said that Argentina should take precautions against the UK’s next moves. After Brexit, Britain may take risky actions such as increasing the number of troops stationed on the Malvinas Islands, or making provocative moves against Argentina, so Argentina must keep vigilant.

In today’s 21st century, long gone are the days when Western colonialists had free rein. However, the UK still insists on its colonial mentality and policies which are inconsistent with the times. This year marks the first year of the Fourth International Decade for the Eradication of Colonialism (2021-30). Eradicating colonialism is a long-term battle that needs the international community’s unwavering support. All countries concerned need to stick to the right direction to form more consensuses. Only in this way can we carry the anti-colonial struggles to the end.

The author is a reporter with the Global Times. opinion@globaltimes.com.cn