Fatal backslide on women's rights in US: China Daily editorial 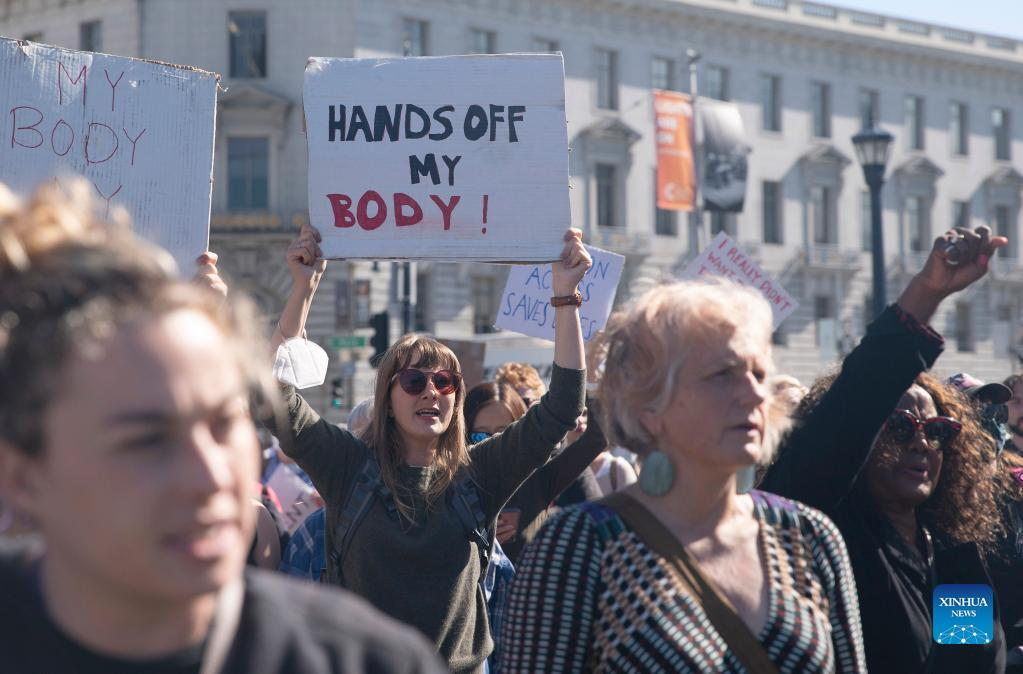 Demonstrators protest against the Supreme Court's overturning of the Roe vs Wade abortion-rights ruling in San Francisco, California, the United States, on June 24, 2022. The US Supreme Court on Friday overturned Roe v Wade, a landmark decision that established a constitutional right to abortion in the nation nearly half a century ago. [Photo/Xinhua]

The US Supreme Court's seismic ruling on Friday to overturn Roe vs Wade that has guaranteed women the constitutional right to abortion since 1973 has sent shockwaves across the United States and around the world.

The 5-4 vote by the conservative majority court has allowed states the freedom to ban abortions, thereby denying women the right to make own personal decisions about their bodies and reproduction choices. Already, the so-called trigger bans in 13 states, mainly in the South and Midwest, have either gone into effect automatically with the court's decision or will go into effect in 30 days. Many other states are set to move in that direction.

The Supreme Court's decision is a curtailment of the rights of women in the US that goes against the will of the majority of people in the country. The latest Pew survey shows that 61 percent of US adults say abortion should be legal all or most of the time, while only 37 percent say it should be illegal.

The ruling will hurt minority women the most, since 38 percent of all the women who had abortions in the US in 2019 were non-Hispanic blacks according to the latest data from the US Centers for Disease Control and Prevention. Many of them live in the Southern states which have the most draconian abortion laws. Being unable to travel to places to access abortion services or simply resorting to unsafe abortion measures will put their lives in grave danger. In the words of Linda Goler Blount, president of Black Women's Health Imperative, the court decision will be "a death sentence for many black women".

Massive protests against the ruling have broken out in many US cities.
President Joe Biden lamented the court decision as a "sad day" for the nation.

Global leaders have decried the historic setback. French President Emmanuel Macron pledged "solidarity with the women whose liberties are being undermined". UN High Commissioner for Human Rights Michelle Bachelet condemned it as "a huge blow to women's human rights and gender equality".

What is more disturbing is that the decision may well be the beginning of revoking more fundamental rights in the US by the Supreme Court. Justice Clarence Thomas has hinted that the court should reconsider contraception and gay marriage rulings.

What happened on Friday was unthinkable not so long ago. Many countries in the world have moved to remove or relax restrictive abortion laws in the past decades. However, the US is regressing on such a progressive trend in an alarming way.

US politicians are used to pointing fingers and lecturing the world on human rights and women's rights, including by intentionally fabricating and exaggerating facts. Now is the time for them to stand up those rights by stopping the worst backsliding on women's rights in the US in nearly 50 years.
Otherwise, they will once again expose their double standards and hypocrisy.