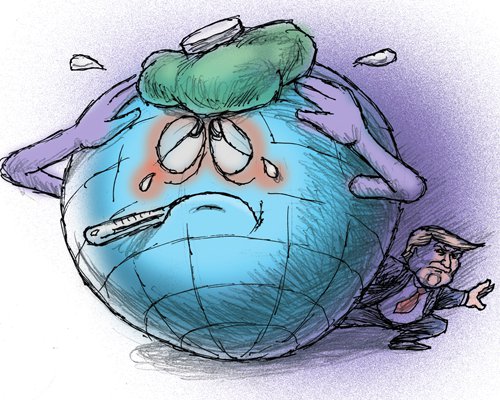 Sino-US relations have been on a downswing this year. Some believe that a "Cold War II" between China and the US is coming. The two countries, they think, are competitive in their strategic goals.
To be specific, China aims for its rejuvenation, while US President Donald Trump pledges to "Make America Great Again." Both countries are somewhat dissatisfied with the current international system, and yet differ on how to change it. China hopes for a global system that makes allowance for developing countries, while Washington believes the unfair system hurts US interests. As the economic gap between the two countries is growing narrower rapidly, China may catch up with the US in GDP, and their military development will make them feel threatened by each other. The US believes that China is challenging its status in international affairs, and it may infiltrate the US' culture and ideology through so-called "sharp power," which harms the vaunted democracy the US is known for. Such worries are exposed in the US' National Security Strategy released in late 2017.
Such seemingly "full competition" will mislead people into believing a cold war is looming again. For clarification, it is not China versus the US, but the US versus the world. The Trump administration is hindering globalization by flaunting the banner of "America First" and withdrawing from deals. If there is a worldwide survey on "Which country is the biggest threat to the current global system?" we know who people will point at. Even many Americans are against Trump's policies and decisions. China is not forming a so-called ideological league to confront the US and other Western countries. Instead, it always seeks reform within the system and appeals for globalization and cooperation, winning the international community's appreciation.
Cooperation has always existed with competition in Sino-US relations since the two countries established formal diplomatic ties in 1979. Sometimes cooperation dominates the relations as in the 1980s, while at other times competition prevails, like in the last 10 years.
Frankly, because of all the differences, the two countries will not become allies no matter how close they get. However, differences shouldn't be exaggerated, for instance, believing that China and the US can't escape from the "Thucydides Trap." No matter how much Sino-US relations change, no one will believe that the countries will come close to a nuclear war as the US and the Soviet Union did in the Cold War era.
China and the US know well the dangers of the Cold War. Forty years of reform and opening-up has changed China fundamentally and it values the current peace and development more than ever. China neither has the intention of replacing the US nor the capability to do so. China has a lot of work to do on the domestic front and its diplomatic goals will continue to serve its domestic needs. And the US also cannot bear the consequences of a second Cold War. The two countries have already felt the pain of a trade dispute, not to mention confrontation in political and defense fields. That explains why China and the US insist on negotiations.
The noise over a second Cold War is loud but the possibility of it taking place is low. However, we should be alert to the lingering Cold-War mind-set inside the US. Trump's election revealed that the US is overtaken by anxiety. Several problems raised their head in the country with their solutions nowhere in sight. Hence, Trump needs a scapegoat to divert public attention. That's why he has continued playing a China card since his campaign.
Meanwhile, the hawks have been disappointed with the US strategy on China for decades, which they believe has not helped Washington achieve the goal of transforming China's political system. They think Washington needs to stanch China's rise with a second Cold War and keep its dominance. But China is not the Soviet Union. If the US is determined to start a Cold War against China, does it have the confidence to win?
In recent years, Washington's political ambience has been frustrating, only voicing the same harsh words about Sino-US ties without rational discussions. It is extremely dangerous when the strategic circle of a major power only advocates a tough stance on China without any different ideas.
On the contrary, inside China, comments about the US are pluralistic and Chinese leaders consistently emphasize that cooperation is the right choice. Perhaps, the US should introspect and avoid getting mired into a self-fulfilling prophecy.