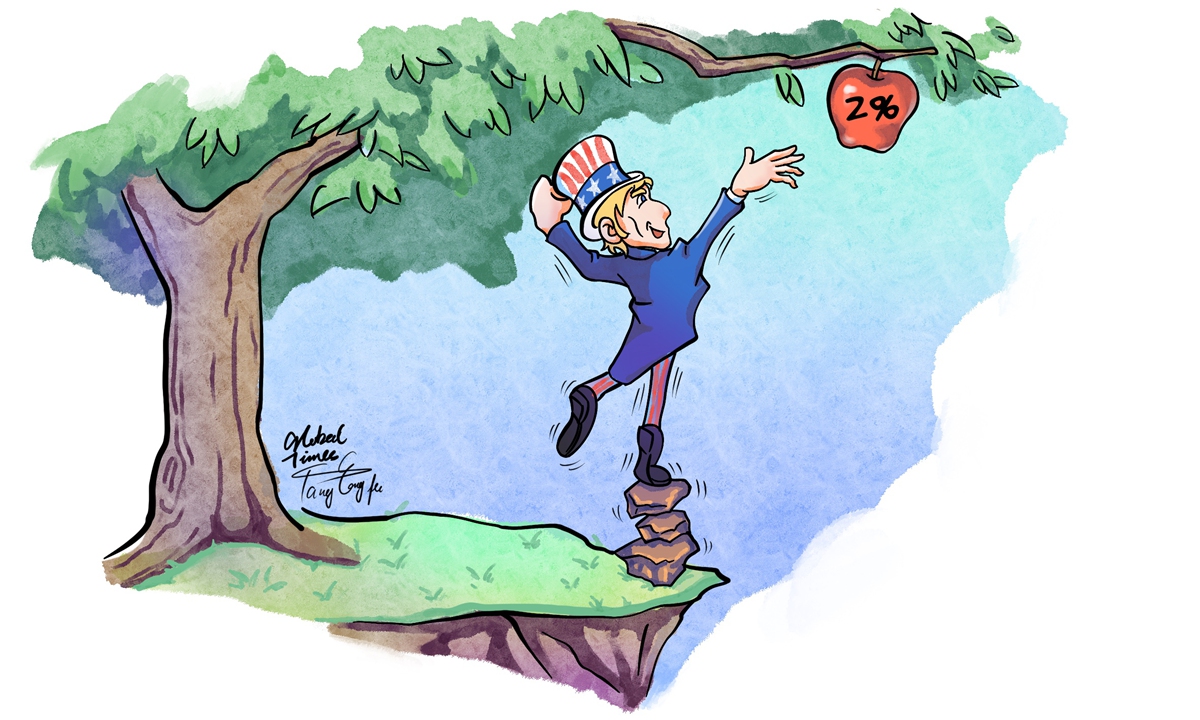 Jerome Powell, chairman of the US Federal Reserve, told congressional lawmakers Wednesday that the central bank has been focused on getting US inflation back down to 2 percent. Powell's determination soothes the sting of high inflation, but poses a more serious problem - sharp Fed rate rises.

US inflation accelerated faster in May, with the consumer price index (CPI) rising 8.6 percent from one year ago, the highest increase since December 1981. Amid soaring prices, many Americans are feeling the pinch of high living costs and they have blamed policymakers for not having considered it beforehand.

Given that high inflation has left Americans deeply dissatisfied with the current US economic policy, it may be understandable Powell is eager to take decisive actions to tackle inflation. At the helm of the Fed, Powell must show his determination in bringing down inflation and make people believe the Fed has the ability to make that happen.

However, getting inflation back down to 2 percent is an overly ambitious goal that does not fully take into account an inevitable side effect of steep interest-rate hikes. If the Fed keeps tightening monetary policy until it meets its goal of 2 percent, it means the Fed has to raise rates high enough to quell the stubborn inflation.

Things might get even worse, if we take into consideration geopolitical factors. After a US legislation banning imports from Northwest China's Xinjiang Uygur Autonomous Region took effect on Tuesday, some American businesses fear that the law will interrupt shipments and raise their costs. That cost rise could be translated into the ultimate consumers' bills and add to inflationary pressures in the US.

In addition, energy crisis will be a cause of concern if the Group of Seven industrialized countries proceed with unilateral sanctions against Russia at the upcoming summit in Germany. High energy prices contribute to US inflation directly and increase the cost of US companies.

An interesting phenomenon is unfolding. On one hand, the Fed raises interest rates to fight against inflation under pressure from the White House.On the other hand, Washington's unilateralist policy has become a source of high inflation in the US. We have to expect that additional policy tightening could occur to offset the impact of those unilateralist behaviors.

If the Fed sticks to its 2 percent target and does whatever it takes to curb the surging prices, its radical monetary policy will be tightened to an unimaginable level. This will seriously drag down the US economy and likely lead to an economic recession. Over recent days, many US economists have slashed their forecasts for US economic growth in the second quarter after the Fed approved the largest interest-rate increase since 1994 and signaled it would continue lifting rates this year at the most rapid pace in decades.

Worse, sharp rate rises will pose huge risks to the global financial system, which should make all economies to be highly vigilant. Following interest rate hikes in the US, global central banks will be forced to keep pace. Major institutions and banks across the world have begun to downgrade their forecasts of the global economy. Deutsche Bank CEO Christian Sewing warned on Wednesday that the global economy faces a 50 percent chance of recession as central banks around the world scramble to combat inflation.

As the US government continues to play a zero-sum geopolitical game and abuse unilateral sanctions, a more aggressive Fed is likely to have ripple effects throughout the vulnerable global economy. Against this backdrop, global stock, debt, and foreign exchange markets may fluctuate drastically, cross-border capital flows may become more unstable, and global financial risks tend to rise. The US dollar's global reserve currency status may disintegrate, and stagflation will continue to haunt a large swath of the world. All this remind us to remain vigilant.