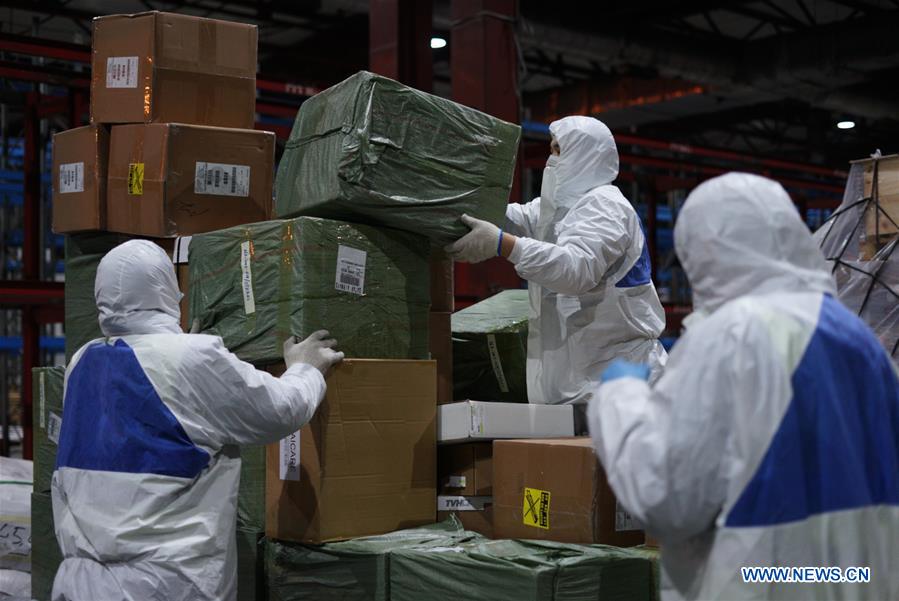 Workers transfer medical supplies from China in a warehouse at the Almaty International Airport in Almaty, Kazakhstan, April 2, 2020. [Photo/Xinhua]

The outbreak of the novel coronavirus disease (COVID-19), now sweeping the world, is not only a big test of China's ability to fight the epidemic, but also a great test of international cooperation.

With the positive trend of epidemic prevention and control in China, the focus has switched to the increasingly serious situation in other parts of the world. As of April 3, the outbreak had spread to more than 190 countries, the number of confirmed cases had passed the million mark, and the death toll was over 50,000.

The World Health Organization (WHO) has already raised the risk of a global pandemic to the highest level. In February, the latest issue of The Economist published a cover chart of the coronavirus' rotation around the earth.

The virus knows no boundaries, making unity in fighting it vital. When the Chinese people were fighting the initial outbreak of the virus, especially in February, they had the support and help of the world. Today, when the world is in lockdown, it is China's turn to do everything in its power to help the world with material supplies, financial aids and, even more valuable, by sharing its experiences.

On March 7, in response to an appeal by the World Health Organization, the Chinese government decided to contribute $20 million to support WHO's campaign for international cooperation in the fight against the pandemic.

Although China's own task of fighting the epidemic remains daunting, still it sent public health and epidemic prevention experts to Iran, Italy and other worst-hit countries. The government and Chinese companies also sent masks, nucleic acid testing kits and other anti-epidemic materials to South Korea, Japan, Iran, Pakistan, and countries in Europe and Africa.

The China Red Cross Foundation also set up an International Humanitarian Assistance Fund against Epidemics, which has mobilized social forces to raise funds and materials to help countries more severely hit by the virus.

As the outbreak of COVID-19 in the United States worsens, on March 29, the first aircraft loaded with 80 tons of anti-epidemic supplies arrived in New York from Shanghai, carrying 130,000 N95 masks, 1.7 million surgical masks and 50,000 protective clothing.

The rapid spread of COVID-19 has taught people all over the world a lesson in building a community of common health for mankind. No country can meet the challenges alone, and no country can retreat behind high walls.

Addressing the COVID-19 pandemic is a common challenge for all humanity, and public health security is a common issue the world needs to address. In the fight against epidemics that affect the safety and security of all peoples, solidarity and cooperation are the most powerful weapons.

WHO Director-General Tedros Adhanom Ghebreyesus has stated: "We must all join the chorus of humanity in the fight against the virus and win ultimate victory. The virus is a threat to each of us, and we must unite as one person."

The outbreak of COVID-19 is a crisis, a disaster, but also a big test. It proves that China is not talking about a vague idea of "a community with a shared future for mankind" because it already exists here on Earth.

On the one hand, economic globalization and scientific and technological progress shorten the distance between countries and between peoples; we are already interdependent and intertwined in economic development and social security, but that could be quickly overturned by a serious infectious disease.

The world is now working hard to combat the pandemic. People facing such a huge public health crisis cannot tolerate any kind of recriminations, shirking responsibilities, and stigmatization based on the narrow interests of certain political parties or groups. The world need to work together against the common enemy.

The author is senior research fellow of Charhar Institute and Institute of West Asian & African Studies of the Chinese Academy of Social Sciences.