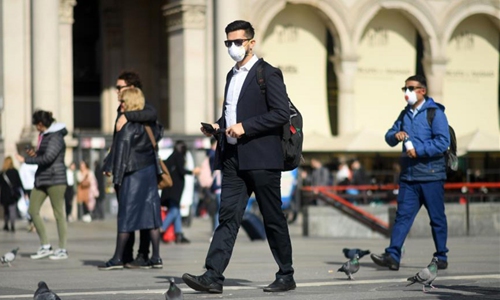 COVID-19 is changing the world and Europe. The pandemic is accelerating the EU crises, but also gives the bloc a historical opportunity to walk out of the plight. The first half of the battle against the virus in Europe almost pushed the EU to the brink of fall, while the continent has woken up as the second half of the battle has been staged.

The EU, which consists of 27 European countries, was already plunged into an unprecedented crisis before the coronavirus outbreak. Brexit not only made a mess of the EU budget, but also triggered a new wave of suspicion toward EU values. When the outbreak first took place in late February, the EU did not issue timely warnings or lend a helping hand to hard-hit countries such as Italy. Nor did it effectively manage the messy situation where member states intercepted each other's medical supplies and closed borders.

During this period, I constantly heard disappointing voices when I exchanged views with European scholars. They contended that the role of Brussels was absent in the wake of the epidemic and that it is likely to hammer additional steel nails into the coffin of the EU. When Europe watched China from afar carrying out swift measures to fight the epidemic, it believed the menace only occurred in the distant East. It even believed China's measures were so harsh that it shouldn't have restricted people's movement or resorted to big data to assist this process. Until early February, authoritative European research institutes and experts still reckoned that the novel coronavirus posed much lower danger than the flu.

The outbreak has since struck a deadly blow to Europe. In a joint article, Wolfgang Ischinger, chairman of the Munich Security Conference (MSC) and Boris Ruge, vice chairman of the MSC, wrote that in the age of COVID-19, the task at hand is to save lives and also to save the Union.

As the crisis brews, the Franco-German axis as the traditional pillar of the EU has begun to play a stronger role. French President Emmanuel Macron tried to deliver inspirational voices to stir up ambition and courage by warning that the EU is facing "a moment of truth." German Chancellor Angela Merkel, as rational and calm as always, said her country was ready to make "significantly higher" EU budget contributions to help the bloc cope with fallout from the coronavirus pandemic "in the spirit of solidarity."

In addition, contrary to the US inaction, Merkel and Macron have pledged to accelerate cooperation on a coronavirus vaccine and to share research, treatment and medicines across the globe. The different anti-virus measures taken by the US and Europe illuminate the contrasting moral qualities of the two.

For Europe, it's a question of survival, as Ischinger and Ruge wrote. From this perspective, the turning point started with a relief package struck during a video conference of the European Council members in April. The 540 billion euros ($584 billion) deal was not only about finance and economy, but signaled the EU's strong will for survival. More measures to fight the virus and recover the European economy are expected to be carried out.

Germany will take over the rotating presidency of the European Council in the latter half of this year, and the construction of a crisis management system will be promoted as an important part to revive the EU. Crises are catalysts for cohesion. The unprecedented coronavirus epidemic gives the EU an opportunity to settle its integration process, to deepen systematic reforms, and to boost overall vitality and strength.

It is predicted that the post-pandemic world pattern will become more complex. Fiercer major power competition will inevitably take a toll on Europe.

Europe's own interests and the pride on its culture make it hard for Europe to pick a side. The discussions of how to play a mediating role between major powers is gaining momentum among Brussels and EU members.

This requires European solidarity and strength. EU political and social elite need to realize and grasp this short-lived historical opportunity endowed by the coronavirus crisis to achieve revival.