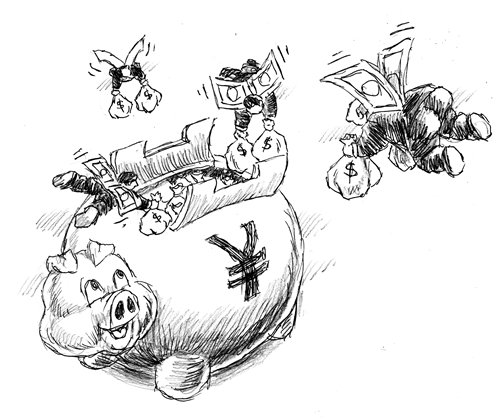 The sluice has been opened wider for torrents of foreign capital to enter China's fledgling finance industry, including commercial and investment banks, a full range of asset and equity management businesses, and highly profitable insurance companies. Multinational financial giants that either have acquired a stake in China, or aspire to enter the market, all hope they will have a level playing field in the domestic market competition. The quickening pace of China's financial liberalization, following the 19th National Congress of the Communist Party of China, has been well received around the world, as the move is an unmistakable sign that China's top leadership remains on the track of reform and opening-up. While overseas financial heavyweights are pleased about greater access to China's finance sector, a good number of Chinese bankers, securities brokers, asset managers and life insurers - those of comparatively small scale with a weak customer base in particular - feel a certain amount of concern, and are uneasy about the impending impact of competition from giant foreign counterparts. After all, the buffer zone that China's central government has provided for them in the form of restrictions on foreign investment is about to be removed. Whether the small and weak financial firms can survive depends on their ability to adapt quickly to this increased competition, insiders say.Zhu Guangyao, China's deputy finance minister, announced on November 10 that the country is to lift the cap on foreign equity stakes in securities, fund management and futures companies to 51 percent from the present 49 percent, and the cap will be removed entirely three years after the new limit takes effect. This means foreign capital will be able to take majority ownership in Chinese commercial banks, securities brokerages, asset managers and life insurers, and foreign financial giants will be able to replicate their global business management regime in China, and wield majority power in personnel hiring and firing.Leading Chinese economists and policy-makers hope this big step to open the financial sector to foreign players will bear positive results, similar to what has happened with China's auto industry. China let foreign car brands set up joint ventures in the country in the late 1990s, and now most of China's major cities have developed a strong car production base, contributing considerably to local economies. Financial analysts say the latest government measure is the most significant move to liberalize China's financial system in a decade, following the decision in 2007 to allow foreign banks to set up minority-owned operations. The new policy has been hailed as a remarkable milestone. Nevertheless, analysts admit that it will take some time for the policy to be molded into reality by the respective regulatory departments for banking, securities and insurance, as well as the central bank. A total of 39 foreign commercial banks had been locally incorporated in China by the end of 2016, with over 1,000 operational bases, according to data from the China Banking Regulatory Commission. The easing of restrictions on foreign financial businesses' domestic operations has been incremental since China promised to open up its financial markets upon its entry into the World Trade Organization in 2001. Many foreign players have complained that excessive regulation has choked their efforts to gain any significant toehold in the world's second-largest economy.In frustration, some foreign banks have even divested their investments in China. In January, Australia & New Zealand Banking Group, one of Australia's biggest banks, joined a slew of lenders in selling its 20 percent stake in Shanghai Rural Commercial Bank. And, after acquiring strategic pre-IPO stakes in the early and mid-2000s, Goldman Sachs, UBS, Citigroup and Bank of America have divested their stakes in some big State-owned Chinese lenders. The investments yielded handsome capital gains but largely failed to help foreign banks build their own China businesses. The Chinese banking system has grown rapidly in the past decade, along with the galloping Chinese economy. Ten years ago foreign lenders held 2.4 percent of the country's banking assets. In spite of the foreign-held assets growing at 20 percent annually for the past 10 years, today, foreign banks hold merely 1.5 percent of what has become a market worth 182 trillion yuan ($27.5 trillion). Zhou Xiaochuan, China's central bank governor, said in June that opening-up would help to build a stronger and more competitive financial sector in China, and that "protectionist behavior" limiting the participation of foreign players would lead to laziness and weakness, causing poor competitiveness and hurting the healthy growth of the industry.China's commercial banks have learned and gained a lot from competition, particularly in financial product design, business model evolution and garnering management expertise, Zhou said.Chinese economists also praised the latest financial reform measure. The pace of financial opening-up is now on the fast track, which is expected to activate the real economy, and make it sustainable in the long run, they said, in addition to enhancing China's representation and voice in global financial affairs. As to preventing financial risks, they said that the Chinese leadership is well aware of its importance, having just set up the financial stability and development committee under the State Council to focus on curbing deep financial risks and sparing no efforts to address financial sector irregularities.