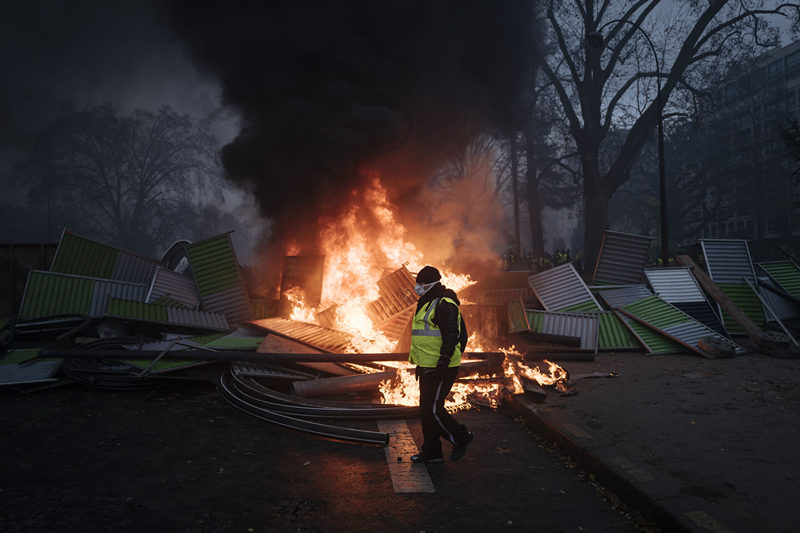 1 - A weakened president at home

Since his election in May 2017, Macron, a former investment banker, had styled himself as a resolute and visionary president in the style of famed former French leaders such as Charles de Gaulle.

His detractors saw in him the authoritarian instincts of a older historical figure: Napoleon Bonaparte, the 19th-century general who named himself emperor of the French.

Having abandoned planned fuel tax hikes on Wednesday, a week after ruling this out in a televised address to the nation, Macron has seen his authority and image take a severe blow.

"The Bonapartist method which was successful at the beginning to launch his reforms is not suitable any more," Philippe Moreau-Chevrolet, an expert in political communication, told AFP this week.

The protests also come as his government is preparing to push through other contested changes, including a hugely sensitive shake-up of the pension system which is likely to spark fierce resistance.

With his political opponents emboldened and protesters sensing weakness, will Macron be able to deliver any more of his vision of a France that is more business-friendly and less dependent on state spending?

2 - Angry France is back

The sight of burning barricades in the street, mass demonstrations and a government in a retreat is a wearily familiar one for observers of France.

But for foreign investors and his fans abroad, Macron had provided hope that France might finally put an end to decades of high unemployment and low growth.

The 40-year-old spent much of his first 18 months in office wooing foreign companies, at one point inviting global CEOs to the Versailles Palace for dinner, where he wheeled out his catchphrase: "France is back!"

Overhauls of labour laws and the state railways, as well as tax cuts for businesses and high-earners, passed with relative ease.

But it is angry street protests that are back, not the image of a "start-up nation" wedded to innovation and technology that Macron envisioned.

The election of Macron, a pro-EU centrist, bucked the electoral trends around Europe which have seen gains for rightwing populism -- something Macron has likened to "leprosy".

Since taking office, he has positioned himself within the EU and on the international stage as a leading voice for centrist politics and multilateralism.

His side has taken a hit.

Macron had named reining in France's public spending a priority since taking office and had set himself an objective of balancing the country's books for the first time since the 1970s by the end of his term.

But cancelling planned fuel tax rises next year will leave a hole in the budget of around two billion euros ($2.3 billion), and Macron might still have to give more ground to appease the angry "yellow vests."

The government had a target of reducing its deficit to 2.8 percent of GDP this year, just under the 3.0 percent limit set under the EU's Stability and Growth Pact.

Any further concessions or a decline in economic growth -- due to disruption from the protests, falling investment or fewer visits by tourists -- will exacerbate the impact of the crisis.

5 - A republic under pressure

The crisis has prompted a new round of soul-searching about France's fifth republic, established under de Gaulle in 1958, which institutionalised the role of an all-powerful president.

The new constitution was intended to put an end to the instability and ineffectiveness of the parliamentary system which emerged in France after World War II.

But the French have soured in record time on three successive leaders -- Nicolas Sarkozy, Francois Hollande and now Macron -- making many observers question the hyper-centralisation of power in the hands of the president.

Macron scored just 24 percent of the votes in the first round of the presidential election, pushing him into the final round but leading his most vocal critics to question his legitimacy and his programme ever since.

"The republic is under threat," the head of the upper house of parliament, Gerard Larcher, told France Inter radio. "I'm not seeking to be dramatic. I want everyone to understand their responsibilities."