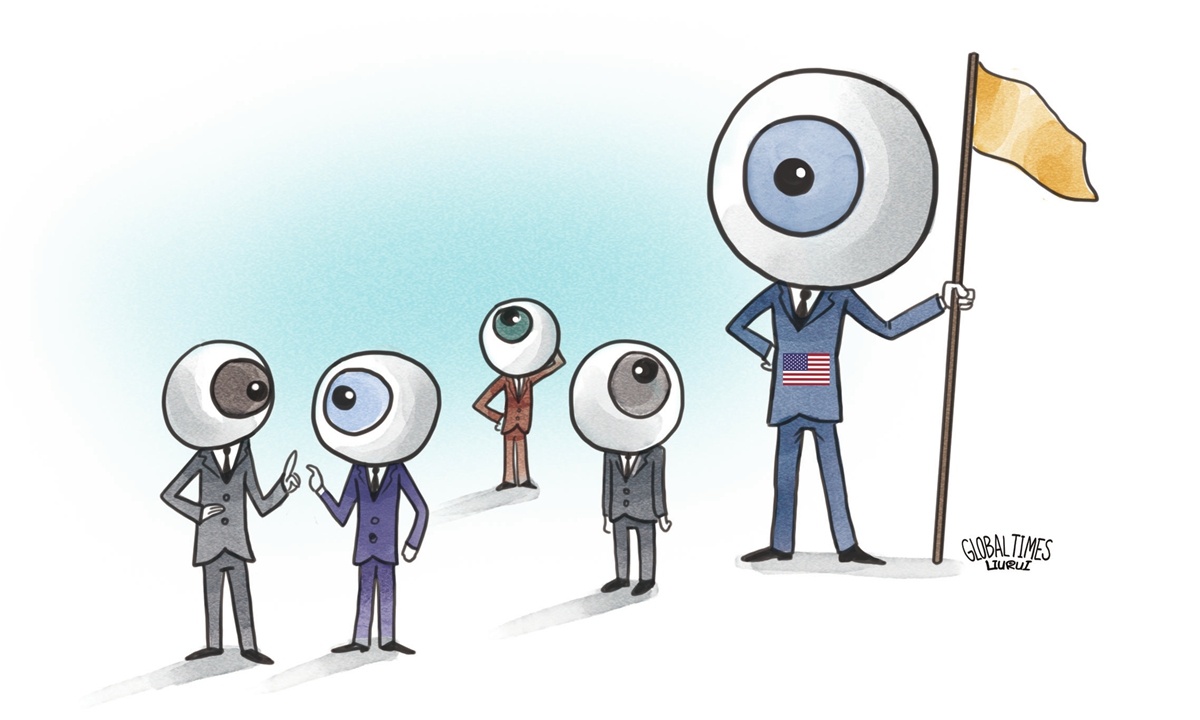 Interestingly, all these accusations can be applied to the US' practices and are slaps in the Five Eyes' own face. Considering that the ASPI is partially funded by the US government, its logic is not so surprising. First, ASPI declared that the CPC has a fundamental confusion over "dominance and hegemony." It is the US that has confused dominance and hegemony. The US publicly uses hegemony to serve its own interests, and it believes it represents the international community. However, not only does Washington fail to represent the international community, fewer and fewer Western countries are following the US' stick, except for Australia, the UK and Canada in the Five Eyes. Suppressing China is to maintain the US' hegemony as well.

And as emerging countries are developing, it has become the Five Eyes' top priority to contain rising countries and maintain hegemony. To put it simply, the Five Eyes is undermining the development rights of the 1.4 billion Chinese people.

Second, ASPI said that international relations are not an activity that lends itself to "binary choices" of friends or enemies, adding that such an attitude is "largely abandoned in Western culture." This seems even more hilarious and self-contradictory. It is the US, Australia, Canada and the UK in the Five Eyes that have always held such an attitude. The five countries share a great sense of superiority toward Anglo-Saxon civilization, and they have tried to comprehensively suppress China and other countries with different ideologies. Instead of being "abandoned," the attitude has been widely adopted in the Five Eyes.

Third, ASPI's blaming of China for "threats and coercive actions" is completely groundless. China has never required other countries to pick sides between China and the US, let alone imposing threats. The US coerces other countries to follow Washington's policies, including suppressing Huawei and confronting China on the Hong Kong and Xinjiang affairs. But only three countries of the Five Eyes have closely followed the US.

The Five Eyes, however, has been intimidating other countries with its "carrot-and-stick policy" to confront China over matters including Huawei, Hong Kong and Xinjiang. The US-led alliance's "threats and coercive actions" are obvious to all.

And finally, talking about what ASPI describes as "identity politics," the Five Eyes can be regarded as the best example itself. Due to the shared culture and ideology, the five countries believe they have common interests and thus have carried out a series of political activities. They regard attacking China, Russia and other countries as a common mission. The evil concept of racism is rising among the five countries.

However, more problems are emerging among the five countries and their identity politics, but these, as ASPI said, "do not create power." For example, as the smallest country in the Five Eyes, New Zealand is unwilling to participate to any great extent in international conflicts.

It seems that ASPI narcissistically regards the Five Eyes as the whole world. But does the Five Eyes still have much "dominance" worldwide? Led by the US, the five countries' dominance in economy, technology, culture and human rights has been gradually weakened. And to suppress China's rising international role and to maintain its own hegemony, the intelligence alliance since WWII has strengthened cooperation and turned itself into a political and security alliance.

The Five Eyes cannot represent the whole world. More and more countries will realize that what the Five Eyes declares as multilateralism is limited to the narrow interests of their own small circle. The five countries are trying to obliterate the diversity of the world.