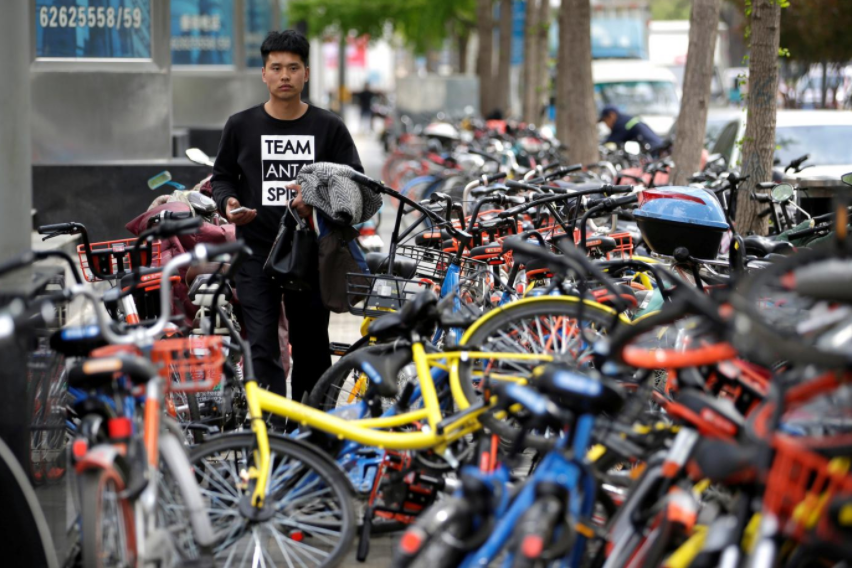 A man looks for a shared bike to ride outside an office building, in Beijing, China April 12, 2017. REUTERS/Jason Lee/File Photo

China’s bike sharing bubble is showing signs of strain, after the country’s third largest firm said it was going under.

The country has seen a wave of iconic, brightly colored shared bicycles hits its city streets over the last year, helping revolutionize urban travel, but also drawing some public ire over mountains of bike clogging up sidewalks.

The chief executive of Bluegogo said in a public letter posted online he had “made mistakes” and the firm was winding up. He apologized to investors, partners and 20 million registered users of the company’s 600,000 bikes.

“We fought until the very last and I believe we can all leave with pride and our heads held high,” Li Gang wrote, adding he had endured months of sleepless nights.

He said financing in the market had become a “bubble”.

China’s bike sharing craze has been driven by huge investments, especially into the two market leaders Mobike and Ofo, which have raised billions of dollars from tech giants like Tencent Holdings (0700.HK) and Alibaba Group Holding Ltd (BABA.N).

The two brands - often seen as China’s “Uber for bikes” - have deployed millions of bicycles around the country, and pushed overseas into markets in the United States and Europe.

The trend hasn’t been without its opponents. Regulators have tightened rules around shared bikes and raised concerns too many bikes were hitting the streets. Some cities have put bans on shared bikes, citing safety concerns.