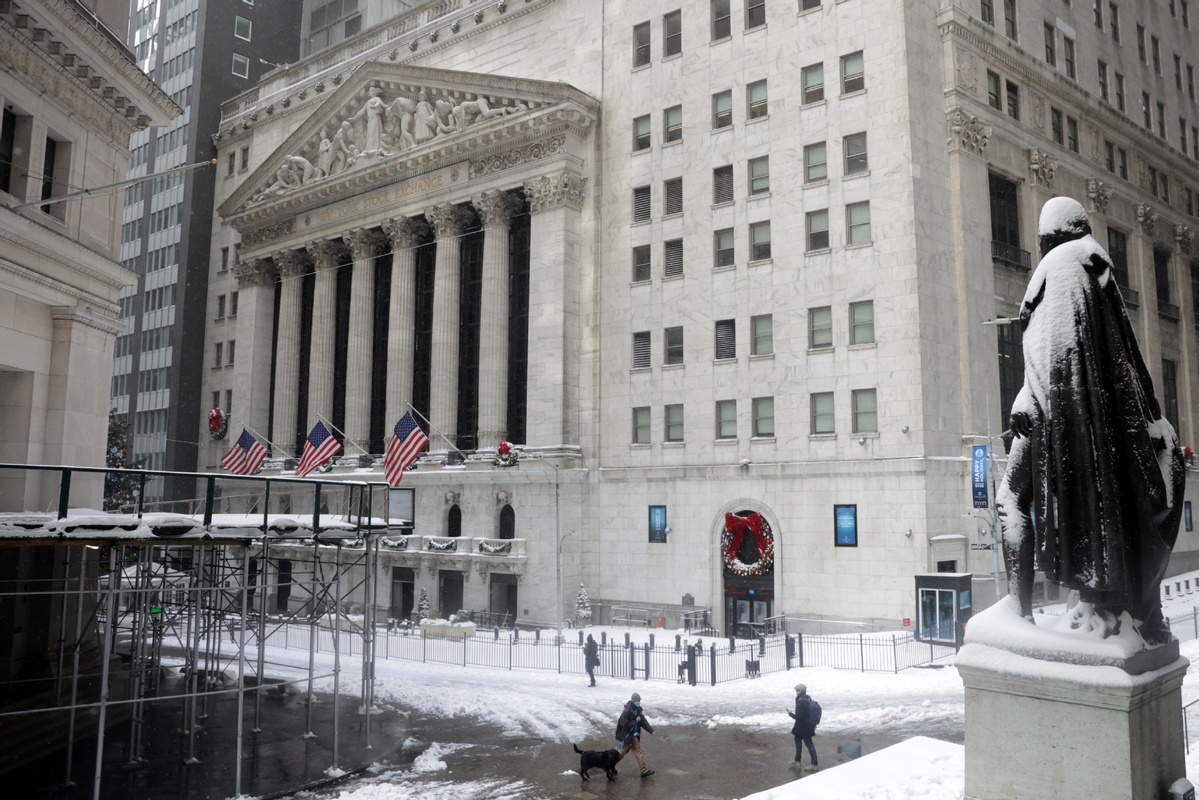 View of the NYSE building during snowfall in the Financial District of Manhattan, New York City, New York, US, Dec 17, 2020. (Photo: Agencies)

The New York Stock Exchange said on Wednesday that it was re-delisting three Chinese telecom companies — effective Jan 11 — based on an executive order issued by President Donald Trump in November that prohibits those in the United States from investing in publicly traded Chinese companies that Washington alleges are linked to the People's Liberation Army.

This is disappointing because it had reversed its original decision to delist the companies, but not totally beyond expectations, given how vehemently the current US administration has abused the powers and resources at its disposal to crack down on Chinese high-tech companies globally using either national security or human rights as excuses, in a bid to contain their rise.

What makes it so intriguing is the unprecedented confusion the flip-flop-flip decision has caused. Something one can hardly associate with the world's most reputable stock exchange.

The latest move marks the third time in less than a week the NYSE has ruled on the issue. The exchange first announced plans to delist China Mobile, China Telecom and China Unicom on Thursday, before making a U-turn on Monday after consulting with regulators in connection with the US Treasury's Office of Foreign Assets Control. Wednesday's decision marks a return to the original plan.

While it is still unclear how much financial damage the swift-fire changes have inflicted on investors as a result of sharp fluctuations in securities prices caused by the NYSE's contradictory rulings, confidence in the US as a top global financial hub has certainly been undercut.

This is because a transparent and sound legal and regulatory regime backed by a stable political system is the cornerstone of any global financial hub. The politically motivated executive order that targets Chinese companies listed on the US bourses has naturally shaken investors' faith in the US capital market, as it applies the rules with arbitrariness and capriciousness to the detriment of interests of all parties — investors, companies and bourses.

It is a win-win arrangement for Chinese companies to list in the US. The more than 200 Chinese companies that have been listed in the US over the past two decades have gained access to the world's largest capital market, while at the same time allowing US and other countries' investors to share the dividends of China's fast economic growth. One of legendary investor Warren Buffett's most successful investments was in PetroChina in 2002, which netted him a gain of $3.5 billion or nearly eight times his initial investment.

The US should stop its fanatical "financial decoupling" bid as its main consequence is eroding its position as the world's top capital market.