Focus on multilateralism in anti-virus fight 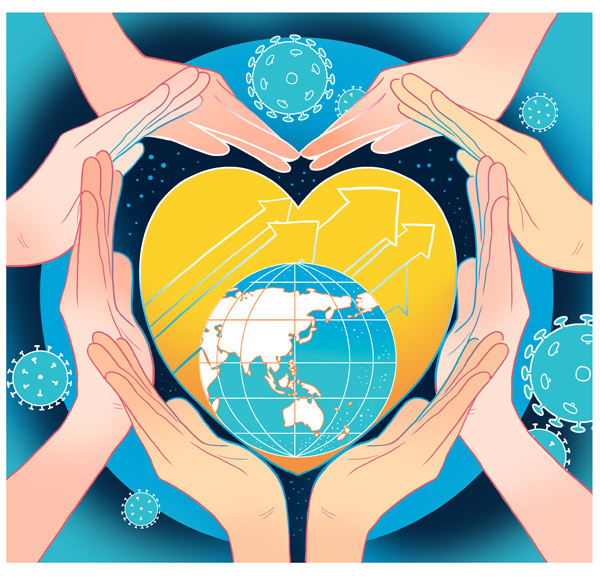 The novel coronavirus has wreaked havoc in almost all countries and regions, and overwhelmed even the most advanced public health systems of some developed countries. Yet there is no sign of the outbreak slowing, with the numbers of confirmed cases and deaths exceeding 1.6 million and 95,000 respectively by Friday, according to the World Health Organization. No country alone can fight such a killer virus; it can be defeated only when all countries unite to meet this common challenge to humankind.

The pandemic has undermined international trade and people-to-people exchanges as global air travel has drastically reduced, with the World Trade Organization saying it could cause a much more severe recession than the 2008 global financial crisis. And experts say the world economy could shrink 11 percent in the first half of this year and, if the virus is not contained, the situation could further worsen.

While many have called for multilateral cooperation to overcome the challenge, some still insist on promoting unilateralism, and fanning racism and xenophobia to fulfill their narrow political goals. That Poland has reportedly refused to allow Russian planes delivering aid to Italy to cross its air space shows the Cold War mentality is at work.

Thanks to economic globalization, countries are today closely interconnected and some international issues have endangered global peace, posing a threat to humankind as a whole. But only by deepening cooperation and building multilateral fronts can we overcome common challenges and safeguard global public health.

Many international organizations have called for global unity and the WHO has offered professional and authoritative perspectives and suggestions on how to fight the pandemic. But incongruity persists, as the United States not only refuses to pay its membership dues to UNESCO, but has also threatened to reduce its contribution to the WHO from $123 million to $58 million at a time when the global health body needs even more support to combat the common scourge.

China received strong support and generous help from many countries at the height of its battle against the epidemic. And after it managed to largely control the virus at home, China has delivered medical supplies to 120 countries and regions and four international organizations. It has provided as much help as it can for other countries and regions to enable them to better combat the virus.

Apart from sharing with the world its experiences of fighting the outbreak and conducting joint research to develop a vaccine, it has also built an online knowledge center on the virus which is open to all. By seeking to establish a regional public health emergency response communication system with multilateral organizations, it has fulfilled its responsibility as a major country, setting an example of how to promote global collaboration and build a community with a shared future for humankind.

As President Xi Jinping said, countries need to "join hands" instead of "letting go" of each other's hands, and "tear down walls" instead of "erecting walls". Such proposals are expected to play an important role in reigniting the world economy after the pandemic is contained.

The increasingly complicated global economic environment can be best invigorated through multilateralism. In this regard, a number of global organizations have been playing an active role in the fight against the virus: the G20 held an extraordinary leaders' summit on March 26 followed by a meeting of their trade ministers; and the World Bank has worked out a $14 billion financing plan to help developing countries and emerging economies fight the pandemic. Such multilateral mechanisms and agendas are expected to become more active and diversified.

But in the post-pandemic era, anti-globalization forces are expected to become more rancorous, and some economies could become more insular, as the global industrial chain, value chain and supply chain are undergoing big changes, and regional and global economic cooperation is being compromised.

Yet a series of new businesses have emerged stronger amid the global public health crisis, including e-commerce and digital economy, which suggests global trade and investment may be conducted in new ways in the post-pandemic period. Strengthening international and multilateral cooperation, and further opening up economies are not only urgently needed to prevent and control the spread of the virus in the short term, but also to get the world economy back on track in the long run.

All countries and economies, especially the least developed ones, have been put to a severe test by the pandemic, which has made multilateralism even more important as it promotes coordination and cooperation. Multilateralism also helps countries to participate in global and regional governance, and resolve complicated regional issues involving politics, the economy, diplomacy, security, ecology, infectious diseases, even the use of space, through negotiations.

As such, multilateralism will continue to play a guiding role in the fight against the virus.

The author is the head of the Institute of Russian, East European and Central Asian Studies, the Chinese Academy of Social Sciences. The views don't necessarily represent those of China Daily.