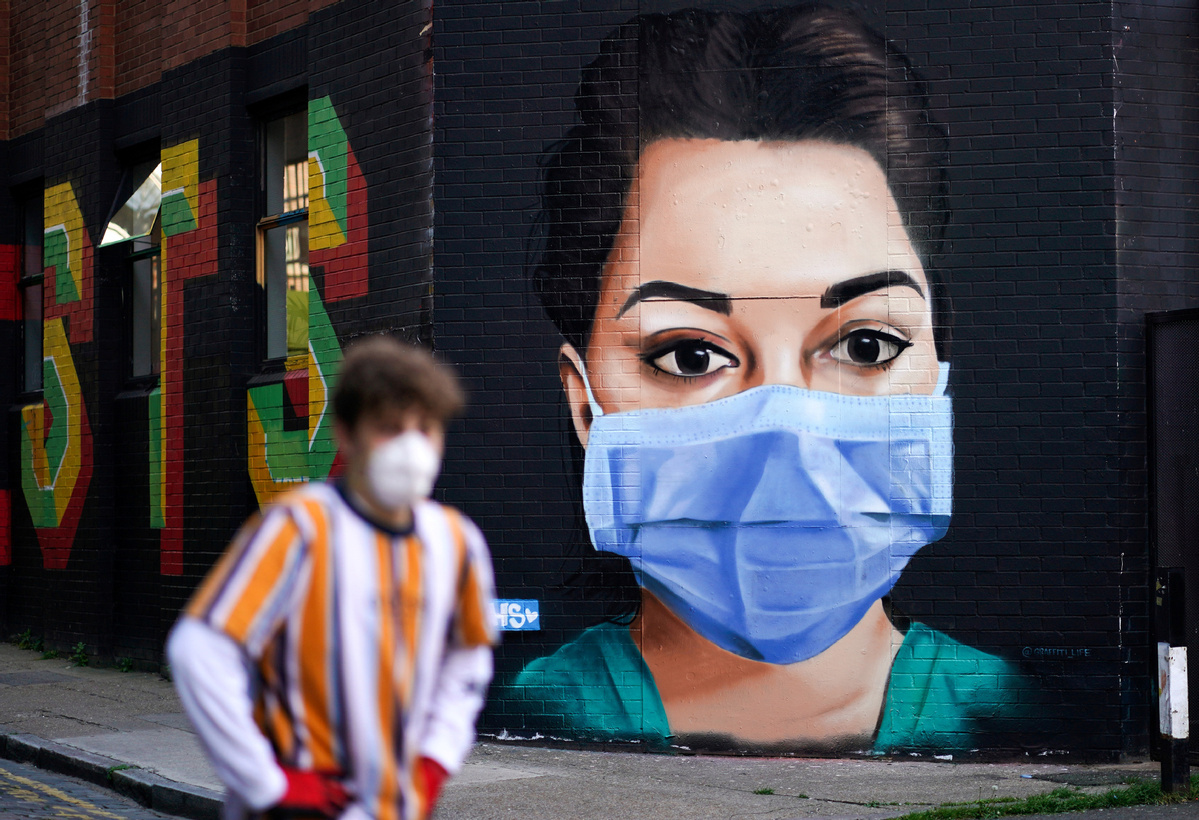 A man wearing a protective mask walks past a mural depicting a nurse in Shoreditch, amid the coronavirus disease (COVID-19) outbreak, in London, Britain, April 21, 2020. [Photo/Agencies]

Is COVID-19 the sole problem? This question is being heard increasingly across the globe. As time goes by, while the pandemic is still spreading at an alarming rate, everyone gives an opinion, and many speculate.

For some, economic consequences will be far more severe and hurtful than the original disorder. For others, there are fears of major incidents of social unrest and serious breaches of public security. Beyond that, rumors proliferate like wildfire. A few ones foresee apocalypse if not doomsday.

In such a tense context, trapped by unbearable urgency, some governments engage in unsophisticated rhetoric. They select a chosen enemy as an ideal scapegoat by hook or by crook. Thus, in a whirlwind timeframe, they try to destroy all that had been laboriously built over decades on a bilateral basis or within a multilateral framework such as the United Nations or the G20.

We must keep a sense of proportion. There is nothing more dangerous than international anarchy and lawlessness. Nothing would be more harmful than inward-looking attitudes. "Dog eat dog” is the deadliest poison. “An eye for an eye will only make the whole world blind,” Mahatma Gandhi once said.

Taken to its logical extreme, this will lead to global chaos. The spiral of violence, from whatever corner, is always ultimately at the expense of the desire for peace that the vast majority of the human beings all share. Let us remember that war, the worst of the worst, remains a symptom of man's failure as a thinking animal.

As a matter of urgency, his infernal cycle must be broken. Therefore, it is high time for the world to pull itself together and to show the required leadership to put an end to the pandemic that, to date, is Earth's No 1 enemy. We're now well into the first and second wave of the pandemic, seeing increases on all fronts.

Accordingly, everything needs to be put on the table. All possible solutions should be fully investigated. The aim is clear: strengthen virology and bacteriology research in order to tailor effective vaccines.

However, we need to go further. We must broach all the points of friction today without any taboos. It won't be easy. There is no choice but to apply for conciliation to get the diplomatic process back, on track, with the goal of achieving a fair and just collective response that addresses many issues: global warming, water crisis, hunger, multiple pollution sources, overpopulation and, more broadly, the effects of an unbridled world economic system.

To those who will express reluctance, recall the speech of former president Ronald Reagan before the United Nations in 1987. He said: “Perhaps we need some outside universal threat to make us recognize this common bond. I occasionally think how quickly our differences worldwide would vanish if we were facing an alien threat from outside this world.” The US president spoke longingly for the world unity that would happen if a massive problem struck the world. Well, here we are.

François de la Chevalerie is a member of the Foundation Charles de Gaulle.

The opinions expressed here are those of the writers and do not necessarily represent the views of China Daily and China Daily website.