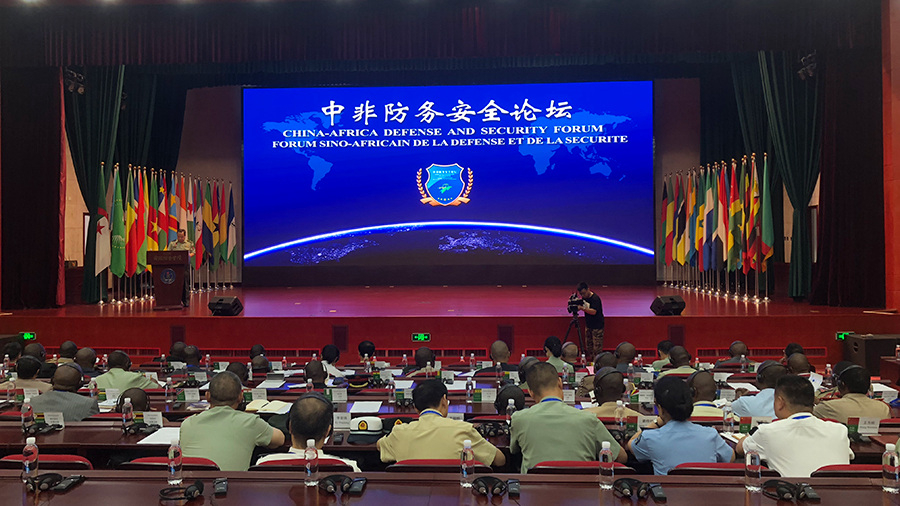 Themed “working together and assist each other”, the first-ever China-Africa forum on defense and security was held in Beijing, China. With the attendance of senior leaders from defense authorities, top military officers and leaders of regional organizations, many people may ask, what can China and Africa get from this forum?

Words from Moussa Faki, Chairman of the African Union reflect African countries’ strong desire to secure an independent future. China is the strategic partner fully respects African wills, needs and not interfering in their internal affairs governed by basic norms of international law.

One of the key reasons is that China and Africa have common bitter memory under Western colonization and imperialism.

How to assist African countries to confront conflicts, wars, non-traditional security threats and disaster early warning and alleviation? Collective security mechanisms like the African Standby Force and the African Capacity for Immediate Response to Crises is a better way. China is engaged in the South Sudan peace process through the sub-regional organization like IGAD.

However, severe insufficient financing and capacity building in Africa has led many countries cannot better develop its own security and keep foreign interventions away. At present, more than 70 percent of the AU’s budget came from international donors. It has limited African security agenda.

To provide concrete help, Chinese President Xi Jinping announced to set up a permanent UN peacekeeping force of eight thousand troops and provide 100 million US dollars to the AU addressed at the UN General Assembly in 2015.

China also established a 1 billion US dollars “China-UN Peace and Development Fund” to support the UN’s peacekeeping and capacity building since Africa has the biggest peacekeeping needs.

Financed by the fund and jointly hosted by the UN Department of Peacekeeping Operations and the Peacekeeping Affairs Office under China’s Defense Ministry, the training course for UN peacekeeping instructors in Francophone Africa was held in China recently.

For the first-ever China-Africa forum on defense and security, self-development of security capacities is also one of the priorities.

Develop prosperity and safeguard peace, better for all

Reports from some Western media like the Quartz tend to describe China’s expanding military footprints in Africa is seeking the US-style military hegemony.

However, unlike Western powers which have a long history of colonization and military interventions in Africa which left decades of conflagration and chaos in countries like Somalia and Libya, China has never conquered or colonized any African countries.

In contrast, Chinese constructive ways of combing economic development, police and military security capacity building to root out the causes of uncertainties to achieve sustainable peace could be a better solution.

Taking Chinese first logistic support base in Djibouti as an example, Western media tend to label it as a threat to their traditional sphere of influence. While the truth is that Chinese naval presence there is endorsed by the UN resolution to help Somalian government fighting against piracy.

Some Western countries military in Djibouti has conducted many joint anti-piracy and humanitarian rescue missions with their Chinese counterparts in the Gulf of Aden.

Chinese navy also provided humanitarian aid to citizens from other countries during the Yemen evacuation. Therefore, China and the West can jointly cooperate to help to maintain regional peace and security.

What’s more, railway and ports financed and built by China have improved supply conditions in Djibouti, which is not only benefiting local residences but also military personnel from Europe and the US.

In many other African countries, both local and foreigners are benefiting from infrastructures like electricity; clean tap water and roads built by the Chinese.

In Western practices, in some cases they focus more on crisis management even military intervention if the country is under serious security problems. While in contrast, China believes that social improvement is the fundamental key to root out conflicts.

In the 2015 FOCAC Johannesburg Summit, many African leaders have expected China to play a more active role in African security issues.

Four major guidelines can be found in China’s decades of diplomatic practices in Africa. Treat all African countries equally, non-interference, create opportunities to reduce dangers and continues to provide development aid even security risks are rising.

The whole system can conduct real-time monitoring, early warning and analysis for infectious diseases in the Sierra Leone military and the whole country.