OPINIONS For drug free society - can we do more?

For drug free society - can we do more? 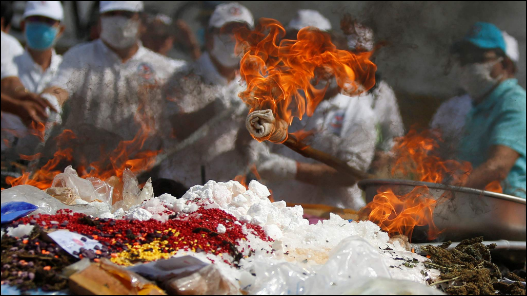 June 26 is International Day against Drug Abuse and Illicit Trafficking. This time period can also remind us that summer vacation is coming, but some children do not want to go home or cannot enjoy a vacation with their family, they prefer to stay in Sun Village. Why?

A twins’ father is still in prison because of illicit drug manufacture, and her mother left and can not be found.

Another girl’s father passed away due to drug overdose and her mother is in prison because of drug trafficking.

One boy witnessed his father torture his mother to death after taking drugs.

Many children want to stay as they get enough food in the nongovernmental organized village, which aims at taking care of children affected by drug-related crimes.

If we use the international common ratio of one registered drug abuser to recessive drug abusers as the reference, there could be 12.77 million drug users all over the country, amount to 0.92 percent of the total population, almost equals to one drug addict in 100 around us.

Drug abuse poses great harm and affects the stability of public security. According to statistics by MPS, there were 152,000 drug addicts among the non-drug-related criminal suspects captured by public security organs in 2017, taking up 10.3 per cent of the total.

Efforts were made by National Narcotics Control Commission and member agencies to crack down drug manufacture having suppressed the criminal activities of manufacturing synthetic drugs.

Innovating the mechanism for blocking drug sources and containing the circulation and trafficking has effectively curbed the inflow of drugs.

Through the continued deepening of key rectification, work has completely reversed the severe situation of drug problems in some regions.

The carrying out of international cooperation and deep participation in international drug control issues and cross-border law enforcement actions have greatly contributed to the overall fight against drugs.

While efforts also need to be made by you, by me, and by all of us, to say no to drugs, to help our friends and family members or relatives stay away from drugs, to persuade drug abusers to accept treatment, and to provide working opportunities for former users if possible, so as to encourage them to reintegrate to the society.

A healthy life, green and no place for drug is the theme for 2018.